The wedding went off without too many hitches, the Mass very a well sung Missa cunctipotens Genitor Deus, and Arcadelt's Ave Maria graced the offertory. As a silver lining, we did not have to endure a sermon! The Mass did have one tiny feature that I have only seen at nuptial ceremonies conducted by the FSSP, that of inserting "admonitions" into the liturgical texts of the Nuptial vows and votive Mass.

I have attended several pre-1970 wedding Masses and the three or four I have heard at FSSP parishes are the only ones which contain this particular practice. Indeed, it is somewhat hard to equivocate what this practice is because it varies a little every time I attend a wedding in such a setting. This past wedding, a solemn high Mass, the "admonition" was a speech or instruction read from a print-out prior to the vows laid out in the Rituale Romanum. It contained the familiar "Dearly beloved, we are gathered here today....", the secular "If anyone knows any reason why these two should not be joined....", a some good words on the nature of marriage as a Sacrament of God and for His own ends. Then followed the straightforward exchange of vows, the blessing of the ring[s], and the solemnization by the priest dictated in the Rituale. As a preface to the actual rites of marriage and as a means of sprucing up the rather bare Roman rites of nuptial, one could do worse. On the other hand, one could do more.

During another wedding at the same parish, a low Mass celebrated by a different priest, the same opening "admonition" was read before the vows. Then prior to the blessing of the bride which follows the Pater noster yet another vernacular admonition was read. Then came the blessing for fecundity following the Placeat tibi, which was again preceded by several paragraphs of vernacular admonitions—textually forgotten to this writer. Yet another wedding attended months early had an even different pattern.

Consultation with a 1910 Missal, a Baronius hand Missal, a 1945 St. Joseph Missal, the Ecclesia Dei (RIP) hand booklet, and the Paul V and Pius XII editions of the Rituale Romanum reveals no mandate or precedent for this practice. The closest thing is a warning that contracting marriage prior to denouncing heresy does not invalidate the union. Interestingly, pastors were warned against marrying cohabitants, but were allowed to marry the homeless under certain conditions.

So are extensive "admonitions" a tradition, an elaboration of the Nuptial rites, or an outright abuse?
Posted by The Rad Trad at 10:43 PM 8 comments:

Should You Fall in Love?

Should you love your fiancée? Most people think you should these days, although what that entails is somehow less clear. Adducing the Angelic Doctor's obvious belief that love is "to will the good of another" falls like a cymbal on the ears of the faithless and even on some of the faithful.

Tomorrow I have the unique opportunity to attend a marriage that was neither arranged nor the result of a protracted period of dating and wooing. In short, it fits into neither the modern nor historical modes of contracting a bond to a significant other. The two parties have decided that their union is a matter of spiritual welfare, of necessity for both to live out their lives meaningfully. In some sense they have followed the millennial tendency to look for "relationships" rather than to "fall in love". But is this right?

It would be hard to fault millennial for refusing to repeat the sins of their parents and grandparents in the realm of marriage. Despite their general proclivity for supporting homosexual unions, they statistically are less promiscuous than the prior two generations and are less apt to divorce. As children of the Great Recession and ex-students burdened with crushing student loan debt, they marry later than the previous generations if they wed at all. While miles off the ideal, they have sought stability rather than the impulse of "falling in love," and for that they deserve some small degree of commendation.

But is it right to seek a "relationship" instead of "love"? A "relationship" today is a functional arrangement. Both parties have compatible values, they have similar or non-conflicting goals, they can lean on each other for emotive comfort. This is in contrast to those who just "fall in love."

"Falling in love" has its roots in the wealthier medieval city states, places with robust mercantile classes who needed neither the family alliances of the nobles nor the stable expectations of the feudal vassals. They could afford to marry because they wanted to marry. One might assume that the Montague and Capulet families of Romeo and Juliet were members of this class rather than the landed aristocracy.

Some centuries into the future post-War American children are compelled to marry at the youthful ages of their parents and yet they are disposed to listlessness owing to an historically unprecedented wealth and security. Teenage angst isn't real, it was invented in the 1950s along with Rock & Roll and songs about puppy love, "unconsummated lust" as Harold Bloom called it. The Beatles, Beach Boys, Elvis, the Isley Brothers, Four Seasons, Phil Spectre, and every other recording outfit beamed tunes to the same theme as And Then He Kissed Me: boy meets girl, girl likes boy, girl loves boy, boy marries girl. This generation discovered that unlike their parents' initial meetings in churches and familial settings, lusting after someone at prom was not a substantial basis for marriage.

Today's "relationship" outlook on dating is much more in accord with the arranged unions and familial ties of past times. It does not mean these people did not grow to love each other and did not become genuine partners in life. It does mean that marriage includes a vow to love another and does not codify existing attractions. In this sense marriage is much more difficult than we like to imagine. Unions in which the husband and wife are best friends, lovers, and parents are really rare and always have been. By contrast, the "blessed continence" and consideration of the "blessed life" extolled by Saint Augustine as much easier to follow faithfully than the long term consequences of "And then he asked me to be his bride/ And always stand right by his side/ I felt so happy I almost cried/ And then he kissed me". Like all things with our fallen nature, there is no perfect formula, but there is the power of God within the Sacraments to make it work.

We are in the midst of yet another octave, the third in four weeks and the first, depending on which kalendar you use, of four in the coming weeks. June is a celebratory month in contrast to the starkness of the following month of July, perhaps intended by the Church as a gradual easement into green season after the timely joy of Paschaltide.

The octave we now hold, that of Corpus Christi, is generally like most other octaves in the traditional kalendar and somewhat unlike the three retained in the 1962 kalendar. The Mass and Office are repeated every day that is not a feast of nine lessons, and the octave is commemorated when such a feast does fall within the octave. On the eighth day the Mass is resumed with solemnity and no unnecessary commemorations and the Office returns to a Duplex formula. It concludes the festivity by re-iterating the feast itself in most cases, although there are exceptions such as the unique Mass on the Octave Day of Ss Peter & Paul, retained in the 1962 Missal at least as a votive Mass of the Saints.

Our three most unique octaves, however, which survived Papa Pacelli's scissors, really do not follow this pattern very well at all. Pascha and Pentecost admit no feasts whatsoever. The Nativity octave need not concern itself with this since it is already both de tempore and sanctoral. What is most extraordinary is that their octave days resemble the feast very little.

White Sunday is a privileged Double with the Dominical Office of 18 Mattins psalms, the return of hymnody, no Victimae paschali laudes at Mass, and no Alleluia appended to the dismissals. At first glance it might appear that the Holy Saturday Mass and is in fact more Paschal than the Paschal Octave Day. In fact in these eldest rites the eighth day marks a point of departure in bringing the character of the feast back into normality. By contrast, the Holy Saturday Mass anticipated the Resurrection without explicitly making it present.

In a like manner, the last day of the Christmas octave synthesizes the Nativity of Christ, the Circumcision, and the motherhood of Our Lady. The Office is completely different from that of the preceding Nativity days and those of the comites Christi, instead following the psalmnody of a Marian feast. Only the collect of Mass, however, reflects this Marian character. The Introit is that of the third Mass of Christmas day, but the readings are of Christ's circumcision. The hymns are not those of the Nativity itself, but the purpose of the feast is clearly the end of celebration of His birth.

Pentecost does not appear to have a proper octave day, although Trinity Sunday could reasonably be considered a crowning point of the Holy Spirit, the fullness of the life-giving Trinity now revealed and manifested. The compunction of Alleluias from Paschaltide is gone as is the Regina coeli. Indeed, the Byzantine rite also ends its Pentecost—on Sunday—with a transition back to normality with "kneeling" Vespers, reviving the prostrations in the Office and after the epiclesis during the Liturgy. And yet in the Byzantine rite the week following Pentecost is not an official extension of the feast, but it is called Trinity Week and fasting is banned.

Perhaps those Orientalizing, archaeologizing vitiations weren't so wise after all?
Posted by The Rad Trad at 9:05 PM No comments:

No, not the self-inflicted chaos hitting most American cities, but rather some more relevant to our season of Pentecost.

Urban VIII's classicizing revision of the Latin hymns has received more attention in recent years thanks to examples on New Liturgical Movement. The Michaelmas hymn was so altered that it adapted to an entirely different meter and verse structure. The hymn for the octave of Pentecost, Veni, Creator Spiritus, received a more modest revision, with hardly anything changing until the Doxology.

The choice to revise this hymn at all is curious in light of the changes Urban's committee of Jesuits, priests unbound to the communal Office, decided to make. Almost all the changes, except for one line, were to word order and not to vocabulary or verse. Why, for instance, change "donum Dei altissimi" to "altissimi donum Dei"? In the older order the shift from donum to Dei coincided with the melody, making a more seamlessly singable text than the slightly awkward result for that line. The only noticeable difference was the change of "dexterae Dei tu digitus" to "digitus paternae dexterae".

As an interesting aside, the 1875 Serving Boy's Manual and Book of Public Devotions gives the pre-Urban proper doxologies for all hymns. With Gregorian chant out of style in favor of polyphony and choral music throughout the Counter-Reformation and Baroque ages, the older texts may have benefited from the fact the better music of those styles was generally written before Papa Barberini. Much like Pius XII's psalter, Urban's hymnody may have been more widely ignored than most are aware. 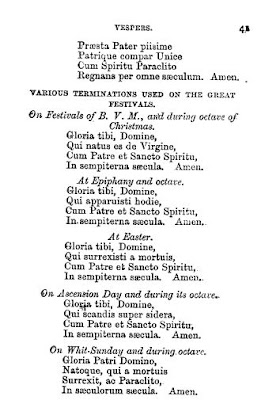