His Traddiness has rightly pointed out that Josephite devotion today exists rarely except in the various pre-1969 liturgical communities. That hasn’t stopped Pope Francis from inserting the name of Our Lord’s stepfather into each of the Novus Ordo Eucharistic Prayers with the 2013 decree Paternas vices, but Joseph rarely has a presence in the average Roman Rite parish except as a statue on the side of the church opposite Mary, carpentry tools in hand. 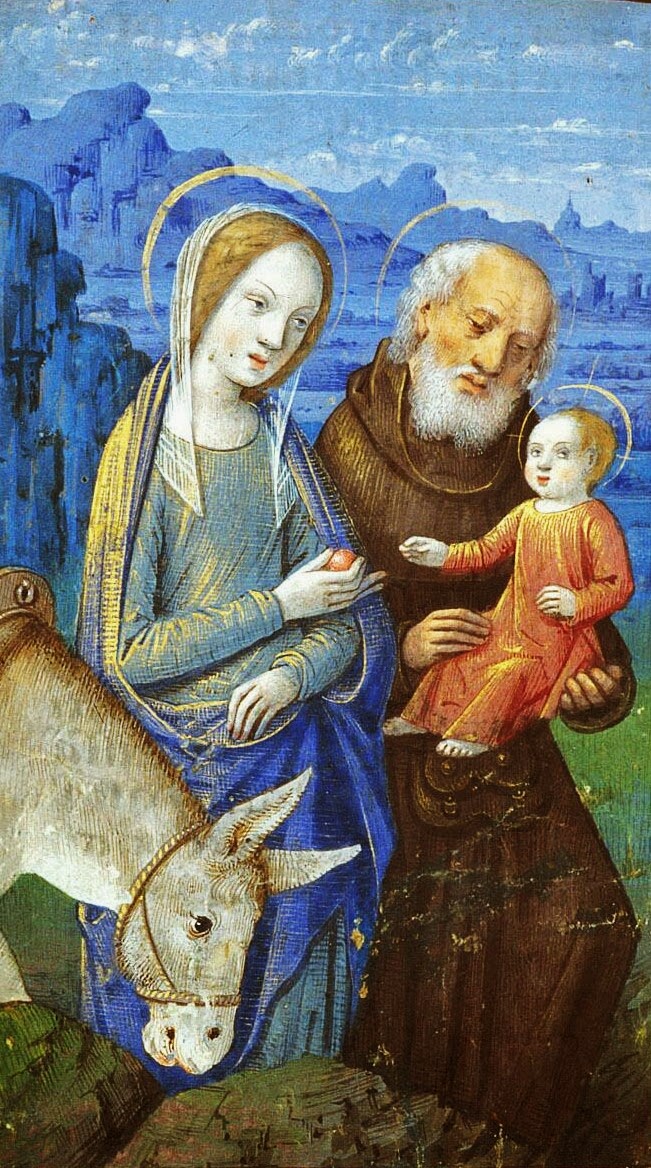 Old Joseph was old. Some legendary works of the early Church place his deathbed age at a Tolkienesque eleventy-one. Certainly not a virgin, he was also a widower and the father of the “brethren of the Lord” who appear at inopportune times in the Gospels. He had decided to quietly divorce Mary out of his belief that she had been engaged in some shady business. He was a sinner like all other men, confessing his faults to Christ and Mary as he passed out of this life.

New Joseph was young. Maria Agreda puts his age at thirty-three when he was betrothed to Mary. This Joseph swore a vow of celibacy, relegating the “brethren of the Lord” to the status of cousins. When he decided to put Mary away quietly, it was because he felt unworthy of being the stepfather of the Messiah. Partaker of the “order of the Hypostatic Union,” he was sanctified in his mother’s womb and made even greater than St. John the Baptist.

The primary text for the few remaining apologists of the New Joseph is the aforementioned The Life and Glories of St. Joseph, written in 1888 by the Anglican-priest-turned-Catholic Edward Healy Thompson, M.A. He apparently spent his Catholic years writing apologetical tracts, hagiographies, and popular devotional works. This poorly researched but long-winded text has been perpetuating the strange ideas of Renaissance-era theologian Francisco Suárez throughout the Anglo-Catholic world for over a century. The book is intended to be a popular text, but has some of the pretensions of academia. It is lightly footnoted, often referencing obscure texts the reader is unlikely to check.

A good example of Thompson’s flawed thinking is his early chapter on the sanctification of Joseph in the womb (Chapter VII). In an attempt to drum up a strong witness of doctrinal authority, he begins by making oblique references to St. Thomas Aquinas’ observation that God gives grace proportional to the office required of a person, then to St. Bernadine’s observation that God elected Joseph to be the guardian of Jesus and Mary. From these rather obvious points, Thompson moves on to obscure theologians who actually say what he wants to hear about Joseph’s prenatal holiness: Bernardine de Bustis, described as a “seraphic” and “most devout doctor... of the 15th century”; Giacomo Lobbezio, a 16th-century Jesuit; Jean Gerson, a scholar for whom the Council of Constance was both his greatest triumph and ultimate downfall; and Isidoro Isolano, a 16th-century Dominican Father who once wrote a devotional book on St. Joseph. From this rather odd theological pedigree, Mgr. Thompson offers the following conclusion:


St. Joseph, then, we see, is always, in the opinion of the Doctors of the Church, held to be, next to the Blessed Virgin, the purest and the most holy among creatures, and worthy, for the sake of the Divine Son and His Mother, to be liberated and purged from original sin immediately after his conception. And this doctrine, professed by great doctors, and tacitly approved by the Church—a doctrine become familiar to preachers in their pulpits, to theologians in their academies, and to sacred writers in their works—may be considered as generally held and believed by devout Christians. (p. 47)

It is hard to think of a conclusion less likely to be drawn from the paltry evidence Thompson delivers, but this is the way he argues throughout the book.

Once, he supposedly quotes St. Athanasius’ De Incarnatione to prove the virginity of both Mary and Joseph (p. 89), but the quote is something this writer at least has never been able to find in the actual text. Frequently he invokes the supposedly “common opinion” of the Doctors of the Church without proving any such commonality. The tone is emotional and inspirational, eschewing the detachment of a true scholarly work (“Joseph was the morning star announcing the aurora which precedes the day,” he says concerning the saint’s birth). Meant to be read by moderately-educated laymen, it’s hard to believe that anyone but the most dedicated reader could make it through all 488 pages.

Mgr. Thompson’s tome might not be worth a more detailed examination, but the older writings and traditions concerning St. Joseph have much to offer. Next time, I will begin a survey of early Christian writing on this saint, especially the supposedly apocryphal works that concern the Nativity and the Holy Family.