As Geese in the Midst of Wolves 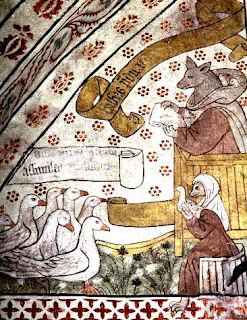 The passing of the pastoral torch at the local Tradistani parish has caused minor unrest among the flock. Thankfully the move had nothing to do with scandal. The outgoing pastor Fr. Smiles was a decent administrator and fund raiser. As a catechist and sermonizer he toed the FSSP line of neo-Thomism and Counter-Reformational priestly clericalism, in addition to his own peculiar ideas about the proper behavior of "traditional" laity. He was of great spiritual help to certain close friends of mine, so I have no wish to speak especially ill of him, but his ideals of total obedience to clerical authority and of silence concerning their known faults are disturbingly similar to the behaviors that allowed predators like Cdl. McCarrick and Rev. Maciel to flourish.

One thing I have noticed among Catholics discussing the #MeToo round of the sex abuse scandal is how exhausted people get after their initial flurry of indignant fund-witholding and commission-demanding. They want things back to normal. They want to be able to trust their priests and bishops again, by which they mean they want to revert back to the point where they do not have to think about how their pastor spends his personal time or about how the bishop allocates the diocese's charitable giving. They want to be unthinkingly passive and receptive to sermons and confessional advice.

The latest revision to the Catechism condemning the mortal execution of criminals is a red herring that well-meaning but unclever Catholics follow until the trail dead-ends far away from the real threat. One of the great improvements of Catholic morality upon even the best of pagan classicalism was the abhorrence of sodomy and of what we now call sexual grooming. Ancient Athenians and Spartans winked at such relationships, but until modern times one could not find a large contingent of Christians who would recommend anything but a severe punishment for a man who so destroyed the life of a child. Recent popes have made a show of punishing the clerics sloppy enough to get caught with a life of solitary reflection and supposed penance. The elimination of the ultimate punishment for worldly crime is timely, one might say. One thinks St. Gregory the Great would have hung these men by their own bowels from the Pons Fabricius as a warning for others.

Catholics comfort themselves with platitudes about the coming "conservative" generation of priests that will replace the white-haired perverts en masse, forgetting that each generation is chosen and formed by the previous. The unspoken desire is the desire to relax, to dissolve anxiety and simply be able to trust one's betters. How quickly we forget that eternal vigilance is the price of protecting the young from monsters.

But vigilance has its own price in a perpetual distrust of the clergy. Cynicism is difficult to avoid when one is always on the lookout for simonists and sodomites. Orthodoxy is difficult to maintain when one does not know if a Roman declaration is motivated entirely by politics and lacks the proper weight to require assent. Spiritual survival in the postconciliar reality requires courage, wit, and good humor more than it needs fear and hatred. The latter is easier to cultivate than the former. To laugh without bitterness is the quality of saints.

Email ThisBlogThis!Share to TwitterShare to FacebookShare to Pinterest
Labels: Clericalism