The One Name I Don't See Mentioned 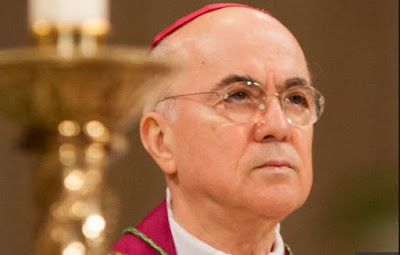 The international media sensation around Archbishop Viganò's allegations against the Vatican and Pope Francis has managed to bring unexpected light to the dark homosexual ring around the upper clergy in the United States, especially among certain cardinals who have influenced the selection of other bishops and cardinals. Oh, if only Cardinal Bernardine could see this day! His name would be all over the papers with her spiritual children, Uncle Ted McCarrick, the Girl Donna Wuerl, some dotty Irishman named Kevin Farrell—once bishop of Dallas, and their patron, the Roman Ordinary himself, who also has his own patrons whose interests he serves.

There is one name, which I have seen a few times in passing, but which I do not see mentioned prominently in any of the articles on the Uncle Ted scandal and Bergoglio-cover up. It is a name that will not figure into prosecutions, because its bearer veiled no crime. It is a name which does not fit into the personal narrative, because that person did not commit any of the lascivious acts alleged. It is a name, however, which will become more and more dubious as the history of the late 20th and 21st century Church crystallizes, a name which will be associated with half-hearted effort, good intentions, and failure. The name is Benedict XVI.

One writer has already alluded to Lateran V in comparison to Vatican II, a council which nominally met to address the contemporary problems in the Church and which ended failed miserably because of confirmation bias on the part of its participants. The Reformation broke out and two generations later the "Petticoat Pope", Paul III, a simoniac himself, finally convened the Council of Trent and confirmed the Society of Jesus.

The name of Benedict XVI lends itself more neatly in analogy with Lateran V than any other historical parallel in this vicious saga. Lateran V met under the aegis of Julius II, the "warrior pope", when Martin Luther was still in a German monastery mismanaging his hormones. Five years before Doctor Luther's theses [dis]graced the door of a cathedral, a general council met to consider the same forces of corruption which would lend the ears of an otherwise pious populace to Luther and his successors. Rather than deal with the problems of simony, embezzlement, and the newfangled issue of book printing, Lateran V confirmed a few political treaties, advocated another crusade against the Turks, and agreed everything else was well and good. To us today, Lateran V looks like a wasted opportunity in the backward mirror that is history. Could they have known the extent of the problems at the time? Perhaps not that huge segments of Christendom would leave the Church for a novelty version of Christianity, but anyone in the know, especially after the Avignon Schism and Jan Hus, could be expected to know the bishops were trying and failing to deal with the brewing issues of the day. It was a failure. It should have been Trent two generations and a major schism earlier, but instead it was a failure.

Benedict XVI knew the Jan Hus and Avignon crises of his time, having battled John Paul II over the matter of Marcial Maciel and the Legionaries of Christ when he ran the Congregation for the Doctrine of the Faith. John Paul refused to believe that a priest, much less a priest with such public fidelity to the Apostolic See, could be a pervert. Ratzinger knew and, when he replaced John Paul as Pope of Rome, made a very visible and public example of Maciel, leaving the future of the Legionaries in limbo, although they endure somehow. During his pontificate, Benedict XVI quietly removed sexually predatory priests from ministry across the world, but without the same dramatic quality as the Legionary founder. A parish priest found in scandal is a problem in a town, but perhaps not on several continents, and hence not worth the inevitable perception that the Church had an institution problem of sexual abuse. The case of Theodore McCarrick, however, much more resembles the case of Maciel than of Fr. Mustache.

Archbishop Viganò alleges that Benedict XVI knew about "Uncle Ted" and his way with seminarians, and saw fit to impose a life of penance on Mr. McCarrick. On a related note, in his 2013 book length interview with Peter Seewald, the same Benedict XVI ran victory laps over having vanquished the "gay mafia" of four or five people who were influencing affairs at the Vatican. Aside from lacking what sorority girls call a "gaydar", the Bishop of Rome emeritus failed to perceive the larger gay presence in the Vatican clergy and the opportunity to make an example of Theodore McCarrick in the same way he made an example of Marcial Maciel. Instead, he read the playbook of Lateran V and executed it in his own time: quiet regret, press management, a reshuffling and a replacement, and a silent punishment.

He did not leave McCarrick on active ministry, but he did not really punish the man by not letting him go to China either. One could plead ignorance for Benedict XVI by saying this seminar room academic, out of place as Pope of Rome, neither understood the extent of the "gay mafia" nor held the power to do anything about it. One could almost believe it if not for the knowledge that, like the bishops at Lateran V, he should have known better. Benedict XVI will not be a particularly memorable pope in history, just as Lateran V was not a particularly memorable council, but like Lateran V the few people who glean his name in history primers will read the short summary and roll their eyes in regret.