Looking for Parallels in the Pornocracy

"Seventy years," said an Oratorian to me after Ascension Thursday (on Thursday) in 2011. "Seventy years it usually takes for crises in the Church to resolve themselves. That puts us just about at the point when we should start coming out of our current rot."

He was adamant on this figure: Arianism, the Reformation, Jansenism, and the Prisoner in the Vatican episodes all lasted about three or four generations until matters began to resolve themselves, either through the intervention of Church leadership, the shifting attitude toward orthodoxy among the laity, or some combination of the two. History is a helpful means of interpretation, but, as economists will rightly tell you, it is a poor predictor of future events, albeit better than tea leaves.

Still, we might let history edify us as to why, unlike in those other crises in Church history, we just cannot seem to "snap out" of the "Modernist" quagmire. Michael Davies and the more severe members of the Traditionalist camp compared our age of rampant, unpunished disbelief with the Arian heresy, a comparison that is not unreasonable at its heart. Only a handful of bishops opposed a heresy that received widespread disapprobation very early on in the history of the Church. Perhaps one reason why Latin Christianity has a lower, more flexible view of ecumenical councils than their Eastern, more specifically Greek and Slavic, brethren is that in the Roman experience councils do not consistently do anything. The first Nicene Council condemned Arius and his followers by an astounding 318-2 vote and issued a general statement of orthodoxy only to find Arius rehabilitated at the Imperial Court some years later, a resurgent and reformed Arianism pervading the Church along moderated formulae, and the world "groan[ing] and find[ing] itself Arian."

The leadership of the Church was either complicit in the general diffusion of Arianism, a heresy held more often by the intelligentsia than by the laity, or wariness of Imperial punishment from Constantinople. Only Athanasius, that brilliant star and perfect soldier of Christ, stood against it among the great bishops of the Church. Saint Liberius, the pope, opposed the heresy until kidnapping, exile, and corporal punishment silenced him. Hilary of Poitiers "hammered" the Arians with his pen, but one wonders if he was as influential in his own time, at a distance from the Empire's heart, than his words are in history. Only Athanasius the Great successfully opposed Arianism in his day to the point of near-martyrdom. Heroic, but hardly the stuff of reform.

Arianism eventually died because people stopped believing it, vestiges of pagan intellectualism evanesced, and new and exciting variations of Christological heresies presented themselves for future disbelief. The parallels with our day are strong, particularly with regard to Church leadership and the inability of the few good bishops to influence the whole, but this writer finds the strongest parallel to our age some five, six, or seven centuries later in Rome. 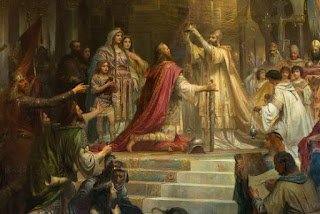 How that age came about is a little murky. In 600 Saint Gregory the Great sat on Saint Peter's throne in Rome, the last pope for several years to ask for Imperial approval of his election. A few generations later all the popes were Greek and some hardly knew Latin, much to the chagrin of the Romans. Christianity diffused throughout Europe and the churches of Gaul and England sought to imitate Roman liturgical practices through their own interpretative lenses, grafting the Roman kalendar, Canon, lectionary, and psalter to their own ceremonies, customs, and monastic impulses. With the coronation of Charlemagne, the papacy should have ascended to its height, but instead it languished. Roman Christianity proliferated throughout Europe during a quiet Christianization, but Rome itself was rarely heard. Saint Nicholas I may be the last pope called "the Great", but he hardly belongs in company with Gregory and Leo; he was simply one of a few good popes during several centuries of "pornocratic" rule.

The pornocracy is discernible through the customary means: Catholic Encyclopedia, the Oxford History of the Papacy, Wikipedia etc. It began in earnest with Sergius III murdering his rivals to the Roman bishopric and then fathering children with the wife of a local aristocrat. The children would successively occupy the papacy, although occasionally an elderly caretaker pope was elected and only murdered when the Sergian whelp came of age.

But it went back further than Sergius. Before Leo III placed the crown on Charlemagne's brow Pope Stephen, of the house of Spoleto, put his predecessor's decaying corpse on trial for heresy and appointed a deacon to give a defense! Then someone, probably a frightened spectator, decided God needed Stephen more than this world did.

These men may not have been formal heretics, but by their actions anyone with plain eyes could see they believed neither in God nor in natural law. John XII, killed by an angry husband, was rumored to have invokes pagan gods during his dice games. Perhaps most like today, these popes proliferated their own successors and the problems continued. Through Theodora and Marozia, the popes of the pornocracy continued to make Rome into a venue for the turf wars of central Italian nobility. They fought more and more for less and less until Rome was not worth having.

Rome's licentiousness did not exist in a vacuum. Europe re-Christianized after the collapse of the Roman Empire (we ought not forget that Gaul and Brittania were Roman provinces) and Christianity took on a distinctly local character, sometimes for the good and sometimes for the bad. Local liturgical uses generated new customs and religious communities coterminous with princes investing bishops with power rather than the Church through her own means. While the Roman clergy, aside from the popes themselves, retained the more ancient tradition of clerical continence, even among married clergy, the northern priests often had wives who continued to bear them children, children to whom they would attempt to pass on ecclesiastical property without passing on the cloth, too.

The situation among clergy who did not bother to marry was hardly better and was, morally, even worse. Without recounting the very sordid details, the sexual proclivities of impure, modern clerics were also well known and practiced in the Dark Ages. Saint Peter Damian, whose feast came a few days ago, asked, "How can a sodomite priest, depraved himself, seek to become an intercessor for the sins of others?"

Renewal came slowly until a genuine reform movement coalesced around the monastery at Cluny. They did the hard work in reform, planting new monasteries throughout modern day France and Germany that would oppose local corruption and provide those with a vocation to religious life with a venue to do so. Eventually the reform party came to Rome during the nadir of the pornocratic papacy: the simoniac, thrice-pope Benedict IX. Several Clunaic monks and sympathizers, like Archdeacon Hildebrand, became pope. None enjoyed the fruits of their labors during their lifetimes yet they revitalized the Latin Church and the Roman See, beginning the "age of faith".

There has been some discussion of the "Overton window" concept today, something I touched upon in my review of Yves Chiron's Annibale Bugnini. The idea is to present a desired outcome so absurd that no one wants it, yet they now have the concept in their minds and will accept lesser versions of this novelty because anything less comes across as a moderate, sensible view. Liturgically, the Roman world was boiled like a frog in cold water in the '50s and '60s. The St. Gallen [Lavender] Mafia desire something similar today. As laymen we have charge over our own souls and I sincerely recommend against reading daily news about Rome, Bergoglio, ecclesiastical politics, Brexit, the Democratic Party, or anything that makes one's blood boil. While I am not entreating readers to put their heads in the sand, I am asking them to keep clear minds in murky times. Washington DC is not the only political swamp in the world. What we can do as individuals is reverse the fight much like Saint Peter Damian and the Cluniacs did in their day. Reverse the Overton window. Speak about when the Roman rite is restored to its normal place in fifty years. Talk confidently about well staffed parishes with orthodox priests and contrast it to the dying places who sterile people and sterile ideas. And laugh at how antiquated and impossibly caught up in the '60s liberalism is, how out of touch it is with our young people, who desire direction and authenticity more than license and liberation (they do not expect that of the Church and never did).

Historical parallels break down when the example becomes more specific, but the pornocracy offers much to learn from in our own Dark Age.
Posted by The Rad Trad at 10:14 PM