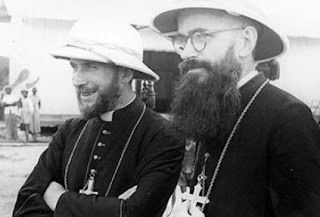 The Amazon Synod. Do we care? Perhaps a little, but there are more pressing matters for Catholics, like the impending feast of an Apostle in two days and the gradual winding down of the liturgical season. It is perhaps worth saying something about the Amazonia Extravaganza, but other more commentators more competent in worrying will do that for me.

We hear from bishops of the Amazon with German names who recount the horrors of Christendom in that region. We have civilized these people by getting them to desist from human sacrifice, so logically they may begin to demand the same things post-Modern German bishops demand. Right?

Only if the Amazon is the Latino foto of the German Church. Why is, that after many decades of targeted missionary work, the Amazon still does not have their own education system but even their own bishop? The region has gone from a high-volume Catholic missionary zone to the former-home of urbanized and Protestantized ex-Natives. Such obsolescence cannot be attributed merely to the insufficiency of clerical numbers. It must be attributed to the insufficiency of the clergy there in general.

One priest remarked in a conversation that "Wherever missionaries are not making zealous converts, it is because they are morally compromised that the people know it." What a contrast to the former Archbishop of Dakar and Apostolic Delegate to French Africa, Msgr. Lefebvre. Say what you will of the FSSPX and their aliturgical ways, he was the most successful missionary bishop of our times. In a few decades he baptized tens of thousands of people personally, founded two seminaries, initiated numerous religious orders into his diocese, and built a full cathedral. By the time he transferred from Dakar to the bishopric of Tulles he left behind an independent diocese with a completely indigenous clergy. There is inculturation.

Sincerity and zeal can be misdirected, as they would occasionally be later in Msgr. Lefebvre's life, but one cannot dispute that those traits served him well as a missionary and brought many to Christ. Would that the kraut bishops of the Amazon learn from such a man.
Posted by The Rad Trad at 10:52 PM