Missa Sicca for the Sick and the Well 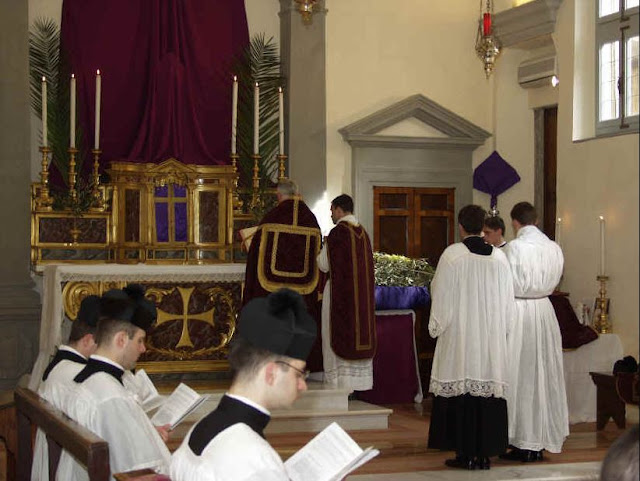 We do not live in unprecedented times. The Great War, the Depression of 1929, the Second World War and similar periods were far worse. We do, however, live in the least sure times since the '50s, when people assumed half the world would nuke the other half.

Although we lack the unfulfilled prospect of death of that prior generation we do share in their uncertainty. We are into a recession that no one can fix until a vaccine for Coronavirus (COVID-19) is available. Until then, our consumer-driven economy will continue to decline athwart bailouts for businesses, unilateral payments to taxpayers, and stupid requirements that companies—bereft of revenue indefinitely—pay workers leave during this time.

Worst of all, those of us who are unlikely to perish from the disease are generally confined to our homes, bereft of the Sacraments of the Catholic Church, the Miracle of the Mass, and of the community, the people of the new Israel with whom we are saved or damned. Last Sunday was the final Divine Liturgy at my Byzantine rite parish for a while. The coffee hour was suspended, leaving the hundred of us who normally spend hours in fellowship together alone and with a clear path to our cars.

In these uncertain, lonely times we the faithful must cling to what we have, the public prayers of the Universal Church. If anyone is reading this blog, then he or she has the internet. Go to DivinumOfficium.com, select either the 1570 or 1910 Office, and pray as much of it as time permits daily. I have my Pius IX breviary and have said its full contents daily in between episodes of staring at a small screen while writing code for my job. You cannot Communicate or Confess, even in good health, but the Church's prayer still belongs to you and may sanctify you.

Perhaps the strangest day of the week will be Sunday. Other than for reasons of illness, I have not missed Mass in quite some time and I imagine the same is true of you, dear reader. What follows is my suggestion for how to sanctify Sunday, which remains a precept of the Decalogue of Moses and a Divine commandment irrespective of the Church's suspension of our obligation to attend Mass.

There is a small tradition in the Roman rite, confined in modern times to one day a year, called the Missa sicca, the "dry Mass." It is what is sounds like, a "Mass" sans any texture: no bread, no wine, no water. In short, the public, non-sacerdotal texts of the Roman Mass are read without consecration of the sacred elements. Even the Mass of the Presanctified, celebrated on Good Friday, is in some sense a Mass, with the ritual of the Fore-Mass and Communion being observed. The Missa sicca, borne out of medieval devotion to the Mass by priests who wished to observe the texts of impeded Masses, exists only in the pre-Pius XII, traditional texts of Palm Sunday, wherein the consecration is replaced by the blessing of the palms.

Here is my suggestion for the Missa sicca.

Lauda Sion Salvatorem, begins the Angelic Doctor. While we consider ourselves solitary individuals, especially in these days, in the traditional view we are saved and damned as a community just as Christ died for the sake of a new Creation, the Church. So pray the Missa sicca, or whatever Sunday devotion you observe, with friends and family. I will be using Skype with a group of friends to observe the texts of the Mass.

Decide Who Will Lead

These days we are all Old Believers. The priesthood exists and offers sacrifice for us and for our sins, but it is no longer in our midst. Although I will recommend against the sacerdotal parts below, it helps for the sake of simplicity and direction to have one person in charge of the affair who is familiar with the rites and texts of the Church's official worship.

Sunday Mass is sung, without exception, after the Office of Terce, that is, the third hour of the Divine Office. If you have internet access and are reading this blog, go to DivinumOfficium.com, pick a year, and say the Office of Terce on Sundays and Holy Days before observing the Missa sicca. Terce is a minor hour involving the recitation of a hymn, three fragments of psalm 118, and a collect. If the Mass is de tempore then it will involve additional prayers said while kneeling. This adds some depth to the day beyond the readings of Mass, which are variable by nature. One benefit of the pre-Pian, traditional Office is that the psalms of the lesser hours are stationary and constant.

Say the Public Parts of the Assigned Mass

If you have a hand Missal or access to the propers of the Mass, turn to the variable parts for the Mass appointed for the day. This coming Sunday appoints Laetare Sunday, the fourth Lenten Sunday. The leader, or anyone competent to sing, can do the Introit Laetare Ierusalem followed by Kyrie eleison.

In place of the Dominus vobiscum, a priestly greeting, use Domine, exaudi orationem meam (O Lord, hear my prayer) with the reply Et clamor meus ad te veniat (And let my cry come unto You). The leader reads the collect and any applicable commemorations of lesser feasts, of any impeded Lenten feriae, or the assigned daily prayers for the intercession of the Saints (A cunctis nos) and for the Living and Dead (Omnipotens sempiterne Deus).

To keep things balanced, I would recommend letting different people read the Lesson/Epistle and the Gospel of the day. If a good singer if among you, let him or her sing the Gradual and Tract. Otherwise, let the leader read the text and keep going.

In place of a sermon, a teaching function brought on by the Church and the permission of the local ordinary, read some applicable exegesis from the Church Fathers on the texts of the day. Some resources are available at New Advent. Many of the Fathers' commentaries are available online. Priests, East and West, usually preach on the Gospel of the day, but for a change of pace why not pull up some explication of Saint Paul's wise, inspired words?

After a few short minutes of commentary in place of a sermon, say the Nicene Symbol, or Creed, do the Domine exaudi greeting, and say the Offertory verse.

In Place of the Canon

In a proper Mass here would come the Canon and Communion, wherein bread and wine become the precious Body and Blood of Christ and are given to we the faithful for our greater union with God and for our salvation. There is no substitution for this moment. None. Still, as the Palm Sunday Missa sicca blesses branches at this moment, the time without the consecration need not be wasted.

This would be the proper time to observe some more reflective form of devotion, the didactic elements of the Missa sicca now observed. If the people involved are amenable, pray a group rosary for each other's intentions, for the fading of the virus, and for the departed souls of those already claimed by the disease. If you are alone and praying the Missa sicca without others you may wish to enter into a spiritual Communion with Our Lord.

For those who believe they are deprived of the presence of Christ I ask are you really? We are all deprived of the Real Presence and of the "Miracle of the Mass", the re-presentation of the salvific act of Christ. That said you are not deprived of Christ's presence per se. Most churches remain open worldwide for private devotion, although lockdowns will curtail this. There remains still one more place of Christ's presence: you. You were baptized—that is, "plunged into"—the Father, the Son, and the Holy Spirit. If you are free of serious sin then the presence of Almighty God, in Whose image you were made, dwells in you. John Henry Newman wrote in Loss and Gain that he was certain of a presence within him, a friend alongside him that the mechanical thoughts of Protestantism could not explain. Christ is among us, He is and always will be.

One benefit of attending a smaller parish is that everyone knows each other. If you are praying the Missa sicca with others then you probably know them, too. Have a coffee or tea together, catch up on the week, vent over your cabin fever, and share the intention to do more together in Christ in the days to come.
Posted by The Rad Trad at 11:11 PM