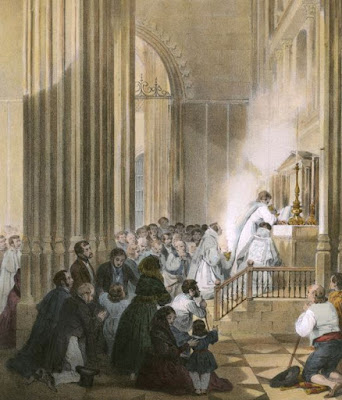 There is no need to bore anyone by recapitulating the details of Guardians of Betrayal, “Latin” version Traditionis Custodes, promulgated on a Marian feast last month by the Pope. For the best reading on the subject, I advise looking and these two articles from NLM (here and here).

Instead, during this brief return from the dead of the internet, we shall endeavor to accomplish two things: 1- to provide some context, and with it, some self-criticism, for this document and 2- to ask what it means for the future.

Origins of the Traditio

What are the origins of this betrayal? Nominally, Pope Francis attributes this intervention to pastoral and doctrinal necessity, the need to rescue the reputation and adherence to Vatican II from traditionalists, the epicenter of Vatican II-denial. Further reading suggests TC came at the directive of the Italian bishops’ conference, who, although an unimpressive lot, are not quite as progressive as Pope Francis on matters of Church government.

The Pope is eager to have his synodal view of the Church—a great immobilizer for the Eastern Churches—and the Italian bishops have resisted this move. The Italian Church, much like the Church in America some decades ago, is both in decline and living off the merits and capital of the past, both spiritually and financially. In Naples they will still come out for San Gennaro and in Rome they will flood St. Peter’s for the Christmas midnight Mass, but the churches are only sporadically filled throughout the remaining Sundays of the year. Some bishops are quite progressive while others follow a Siri-esque line. Indeed, there is not much to commend or unite the bishops of this decaying Christian nation than a dislike of the “Tridentine” liturgy. Why? Is there a fear of neighboring France?

France is a nation of 67 million people, of them about 50 million self-described Catholics. Prior to the outbreak of the Coronavirus, only about 5% of that 50 million heard Mass on Sunday, or 2.5 million people. Some numbers I saw years ago, during the controversy surrounding their attempted rehabilitation by Benedict XVI, estimated adherence to the Fraternity of St. Pius X around 100,000 Frenchmen and a similar number for “indult” Masses. Those figures may have grown in the last decade, but with the drop in Mass attendance due to COVID-19, a figure unlikely to recover to its former mediocrity when this pandemic ends, the traditionalists will continue to be much bigger fish in an ever-shrinking pond.

Italy is not France, but it has the potential to become a traditionalist hub. Many of the more prominent traditional and conservative thinkers in the Latin Church are either Italian or live in Italy just as they tended to come from France decades ago. There are less than a hundred Latin Masses available in Italy and only half of those Masses take place every Sunday. Some years ago, Una Voce reported that there were hundreds of petitions for Latin Masses in Italy going unanswered. I wish I could find this report and scrutinize it; reasonably, many of these requests probably overlap (multiple people in a parish or village asking for the same thing), but there is a bottled-up demand. Moreover, the horror of the Pope when hearing about “rigid” seminarians underscores a fear of young priests who could unilaterally promote the old Mass for the next five decades in a withering liturgical milieu. The bishops’ concern, if they see the Roman Mass as a threat rather than as a spiritual treasure, is in fact warranted.

Among these factors, it is also worth remembering that the Italian Church is liturgically behind the rest of the Church in terms of liberalization. They did not have Communion in the hand, for instance, until John Paul II. Msgr. Bugnini looked at the papal basilicas as his enemies because they guarded the Gregorian musical tradition, and, indeed, in Rome and throughout Italy, many cathedrals and collegiate churches retained a daily sung Mass with Lauds and Vespers daily until quite recently. The expulsion of Giovanni Vianini’s Schola Gregoriana Mediolanensis from the basilica of San Vittore is a symptom of the same. Andrea Grillo may be the prophet of modern Italian liturgy, but there is also clearly a fear that the new, “rigid” seminarians may be his Jeremiah.

They See Themselves in Us

Guardians of Betrayal is principally about power, not liturgy. It is an attempted dis-enfranchisement of a hub of people who have a different spiritual bent, a different view of the world, and a different desire for the future of the Church than the Pope does or his Age-of-Aquarius collaborators. Their predecessors, the revolutionaries of the ‘40s and ‘50s, began their revolution occupying a smaller portion than we do today of a Church much more uniform in faith and worship than we have today. They achieved their revolution through finding the right levers of power to pull, manipulating their way through committees, bureaucracies, and clerical appointments until they could convince the 2,000 bishops of the Church that a wholesale refresh was the only way to keep the Church relevant. They kept underground during the papacies of Pius XI and Pius XII, while still finding ample opportunities to introduce dialogue Masses, versus turbam worship, and to mention the inevitability of the “Mass of the Future” (a book by Gerald Ellard SJ).

Traditionalists are, unfortunately, often more “conservative” by temperament than militant. This is a crucial problem because conservative people tend to value their individual liberty over the broader picture. There are evangelical and militant people in the Latin Mass movement who would find themselves at home with the 17th century Spanish missionaries to the Americas or with the early Franciscans, but most I think are content to stay in their parishes and make their first Saturdays. They assume, not unreasonably, that the demographic trends in the Church mean the inevitable fall of the progressive faction and a better future. They are not entirely wrong, but they do not see the entire picture as well as the well-aged reformists.

People who are conservative by temperament, like most men, tend to want things clear, obvious, out in the open. In a word, they naturally expect affairs to be settled openly and honestly. These are noble attributes and ones which we have inherited from the image and likeness of God, damaged though they are by our limits and the effects of Original Sin. These are not traits generally shared by people who are good at politics or politicking. The necessity of making friends and doing the “art of the possible,” rather than doing what is obviously right, is bothersome to us. At some level, the decade of “TLM good, Novus Ordo bad” articles and books are directed toward this open and honest perception of human decision making, whereas the more relational method is what really creates change.

Progressive churchmen know this full well, and while there are relatively few sympathetic prelates and cardinals who would die on the hill of the old Mass, their number has grown. Would it be wrong to pull one’s self away from one’s parish and play the game of politics for the greater good? St. Gregory the Great lamented the loss of silence and his difficulty praying since being ripped out of his monastery to become Pope; administrative affairs depressed him, whereas his ears were once full of divine silence, they were now full of gossip, positioning, and frivolities. Yet, he endured.

Similarly, St. Peter Damien is remembered as a firebrand polemicist and preacher, but he also left his monastery to participate in the “art of the possible.” In his fight against sodomy in the clergy, he would visit bishops, present the idea that homosexual clergy should be excommunicated and only given the Sacraments in extremis, and then backpedal to a more moderate position, such as a suspension for a few years or perhaps laicization for the worst offenders. He promoted monasticism, both for its roots in Christian life and because the monasteries he founded were generally answerable to the Apostolic See rather than to the local ordinary, creating a rival sphere of influence and orthodoxy. A true reformer, the saint possessed a strong vision of the Church and sought it through every means available rather than abiding in perfunctory hope.

Progressives recognize their own past ascendancy with our current potential. What is more, the old Mass has created a rallying point and a pivot for organization that progressives in the past lacked, which is why the result of their reforms was so disparate from place to place. Traditionalists would do well not just to appreciate their position, but to learn how to use it.

“Be ye wise as serpents and simple as doves.”

Nominally, Guardians of Betrayal originated out of a concern for the integrity of the Second Vatican Council and concern that its rejection would sow seeds of dissent and division within the Church. Much can be said of Vatican II, but this article is not the place. Readers of this blog will know that the mid-20th century liturgical reform had next to nothing to do with Vatican II, that it was in fact the independent project of the papacies of Pius XII and his protégé, Paul VI, that under the Consilium it became a runaway train, and that Vatican II was used to justify the reforms through parliamentary manipulations.

All the same, TC makes official the conflation of the Novus Ordo with Vatican II and the old Mass with not-Vatican II. Aside from underscoring the historical and liturgical illiteracy of its authors, Guardians of Betrayal brings about a new issue: in merging the New Mass with Vatican II, and in turn the old Mass with not-Vatican II, does not banning the old Mass effectively sweep the pre-November 1969 Church into the dustbin? And with it the authority and prestige of the Pope’s very office? Benedict XVI’s “hermeneutic of continuity” received some just criticism from liberals and traditionalists, but it had with it the noble goal of keeping the Church whole throughout its history. Even Paul VI lamented the difficulty of moving past the old Mass and stories of his private disconsolance confirm that those feelings were quite genuine. The guise of Vatican II and the near-universal adaptation of the Novus Ordo in 1969 could at least suggest that the liturgical change of the time was an act of the Church in a particular direction. TC is a one-way, unilateral decree which scornfully looks upon the souls and consciences of people who find fulfillment in the same place where most saints found it.

In part 2 we will consider what all of this means for the future of the liturgy, of Church government, the “biological solution”, and what we should do.

I also hope to post a review of the wines produced by the monks of Le Barroux soon.

In the interim, keep the faith.