The Year of St. Joseph: Sold into Egypt 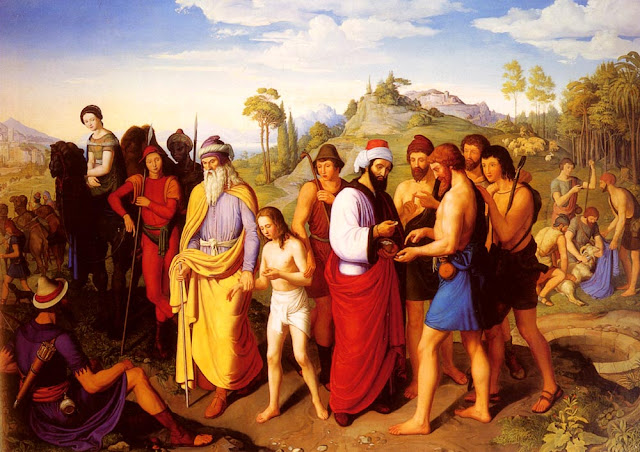 The Year of St. Joseph, proclaimed by the Holy Father to extend from December the 8th of last year until the same of 2021, offers the faithful a cornucopian wealth of spiritual riches. January gave us a devout Catholic president, named appropriately after the ecclesiastical year. March gave us the triple treat of Jordan Peterson flirting with Christianity, Milo Yiannopoulos straightening himself out while growing a mullet, and Pope Francis instituting a fifteen month-long overlapping Year of the Amoris Laetitia Family beginning on St. Joseph's own feast day. April featured the exposure of financial malfeasants in the Vatican. Finally, July has given us first a bit of Louisiana legislation celebrating the annual feast of St. Joseph the Worker, and then a timely reminder of the need to be faithful custodians of the Catholic tradition. The patron of the universal Church is assuredly watching over us with restful eyes.

If nothing else, this whirlwind of church politics has been a bracing reminder of the need for Christian souls to cling ever more closely to Christ the Bridegroom. It is a difficult thing to keep one's mind on heavenly things, and one's heart detached from the pomp and treasures of this world. This is nearly impossible when you are being betrayed, as it often feels, by those who most owe you fraternal love and fellowship.

Much as Joseph of old was stripped of his many-colored coat and sold to passing slave traders of his own distant kin, so have we too been stripped of the glorious gifts handed down from our fathers and cast into a pit with no water. It is a sad state of affairs—one which would have broken a man of lesser faith—but not the disaster it might appear to be. Will we too see the day when it can be said, "You thought evil against me, but God turned it into good"?

The other Josephs of Scripture also serve as examples. Joseph of Arimathea boldly asked permission of the procurator to bury Christ in the face of what was clearly deadly persecution; so we too must treat respectfully the holy things which authorities attempt to destroy. Joseph Barsabbas ("son of an old man," in some translations) was considered to fill the role of the Iscariot after the Ascension, but ended his clerical career as a relatively obscure bishop and martyr; so we who have no pride of place must remain faithful to the end. Joseph Barnabas ("son of consolation") bravely confirmed St. Paul's conversion before the other Apostles, but was later humbled when he followed St. Peter into error; so should we take care not to allow human respect to blind us to hard truths. Finally, Joseph the Betrothed is an example of fidelity to God's commands and readiness to do what is needed in the worst of times.

Ite ad Joseph, indeed. Go to each holy Joseph and beg them to petition God for a double spirit of the grace given in their troubles.