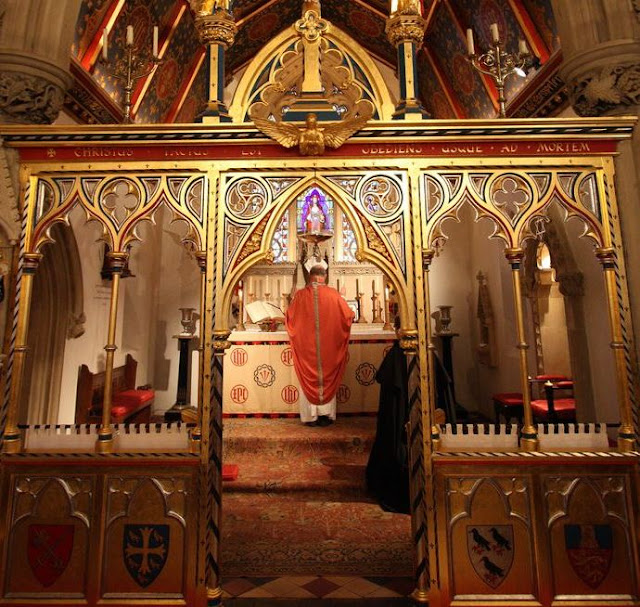 Inaccessibility remains the greatest hurdle of the traditional Roman rite to the faithful of the Latin Church. It is not the priest "facing away" from the people, nor the supposedly ritualized ceremony, nor the quality of the vesture, nor even the music. It is principally the language and the seriousness of the old Mass which shocks people. The older rites intentionally separate the sacred and the profane, simultaneously lifting the profane terrestrial elements of bread, water, wine, and human flesh to the Sacred as Christ Himself did.

In a recent article, Dr. Kwasniewski argued that the Latin language and music form an sonic iconostasis in the old Mass, an expression of the inherent separatedness of God from Man and His lifting of Man up to Himself. This was not meant to keep the people out, only to emphasize the greatness of the mysteries celebrated in past times under a baldachin or behind a rood screen and in modern times beneath a linguistic veil.

Dr. K's observations are in continuity with the Byzantine tradition of viewing the development and enhancement of the liturgy as the work of the Holy Spirit by the means of human accidents rather than as intentional human oddities. Eastern Christians, Catholic or dissident, view their liturgical traditions in their current forms as the work of the Spirit and laden with spiritual meaning. For instance, in prior times the rood screen of the Greek churches separated the people from the sacred action, as in the Latin rite, but during the late Palaiologian empire, the people began to hang their icons on the screen. Although this was an historical curio, the practice stuck and the screen became a solid wall. Far from viewing this change as a corruption or something belonging to the 15th century, they saw this as an elaboration of the old screen's bifurcation of the mystery of the Mass from the world and the obvious presence of the saints at the altar ("invisibly escorted by the angelic hosts").

All this sounds quite good and easily relates to the Byzantine visual veil on the Eucharistic sacrifice, but if this is true it has been true for most of Latin Christendom's history, not all of it. The Latin language was spoken as the vernacular of most of the former-[Western] Roman Empire for centuries after the collapse of Rome under the barbarian invasions of the fifth century. The same language people spoke was the same language as the Roman Mass, however it sounded very different from the Latin one hears at the nearest Traditional Mass today. Indeed, our Latin Masses would have been discernible, if disagreeable, to Cicero and to the Roman Christians of Nero's days. It would not have been too intelligible to sainted popes like Leo and Gregory the Great.

Enter Late Latin and Early Romance by Roger Wright, an influential, but somewhat controversial summary of the evolution of Latin from Cicero through the Middle Ages. The author follows certain changes to pronounced Latin which are visible in misspellings in graffiti at Pompeii or in the journals of contemporaries of the third to sixth centuries. Dipthongs concatenated, words ending in M or T or S started to drop off the last consonant much like how Puerto Ricans speak Spanish, and soft vowels took on longer O sounds. "Multum", for instance, became pronounced "multo", like modern Italian. The more familiar elements of Ecclesiastical Latin, the "ch" sound and modern pronunciation of V, entered the language just after the Julio-Claudian dynasty with the rest coming later.

What's more, Latin, spoken as a vernacular in Iberia, Gaul, some part of Britain and the Germanic lands, and elsewhere, continued to take on characteristics of indigenous languages or the speech patterns of the people in those areas. The result was a Latin not unlike modern English, a language with a written tradition quite different from how it is pronounced today. "How are you?" would phonetically be pronounced "Ho-w ar-eh y-uw" before major changes to our tongue during the Renaissance. Latin underwent a similar change after the Fall of Rome through the age of Charlemagne. There was one written tradition of Latin, universal and unchanging everywhere, pronounced differently almost everywhere, being pronounced as proto-Italian in northern Italy, as proto-French in Gaul, and as proto-Spanish and proto-Portuguese in Iberia. Mass and the Office were likely observed accordingly, with the texts nominally being the same everywhere, but pronounced and sung in a way intelligible only to the people of a given area, a universal language of the liturgy until it was spoken.

Charlemagne desired a revival of classical learning and an accumulation of knowledge, which would require a coherent linguistic tradition among those who were to be educated. His advisor, the deacon Alcuin of York, suggested that the Latin spoken among the educated in England be normalized throughout the lands of the Holy Roman Empire, reaching Rome and becoming the "Church Latin" which today sounds so much like Italian. Wright and other modern Latinists are somewhat derisive of Alcuin's Ecclesiastical pronunciation, believing it artificial. It was in fact the natural evolution of Latin in a particular area which had its own local, Germanic languages, which is why Ecclesiastical Latin sounds closest to Classical Latin which a very few exceptions (Vs, Cs, and dipthongs). The two are mutually intelligible, which cannot be said of either language regarding the proto-Romance languages which evolved elsewhere.

With more provinces of Latin Christendom adopting the Ecclesiastical method, the Mass and Office ceased to be in a spoken vernacular and instead became a semi-intelligible sacred tongue despite the written words remaining entirely unchanged. The resulting situation would have been something very similar to Church Slavonic: something generally intelligible, but entirely so, to Ukrainian and Russian speakers. Speakers of proto-French, proto-Spanish, proto-Italian, and proto-Portuguese certainly would have been able to understand and learn the psalms and ordo Missae over the course of their lifetimes and even understand it, but the variable parts—the readings and orations—would have been lost on them.

As a result, the faithful took on new manners of being occupied during these moments. Educated people often recited the Little Office of the Blessed Virgin Mary. To the masses, the processions to the altars before Mass, the dramatic events of Holy Week, the blessing of sacramentals, the great feasts of the year, the mystery plays, and the vernacular hymnody associated with these days became their manner of participation in the liturgical life of the Church and remained so in most places until the 20th century.

Even before the "deadening" of Latin by Charlemange and Alcuin, constant abecedarian engagement with the words of the Mass were foreign to the Roman tradition. The Ordines Romani recount that the chants of the Mass were not popularly sung, but delivered by local subdeacons according to seniority. The celebrant dictated how long chants would be sung by signalling when to move to the Gloria Patri. Office and place admitted one to a certain level of participation in the liturgy, not merely language. With the opening of the sanctuaries and simplification of ceremonies after the Reformation the Latin language was the only remaining veil of mystery which surrounded the Mass and the liturgical act for centuries. Latin filled the void of the rood and the sanctuary veil.