Good Friday: Mass of the Pre-Sanctified

I will endeavor to give a very brief explanation of the old, pre-1956, Good Friday "Mass of the Pre-Sanctified." The name is such because the structure, vestments, music, and prayers of this services, particularly towards the end, follow the structure of a Mass, although using a Host consecrated at yesterday's Mandy Thursday Mass. 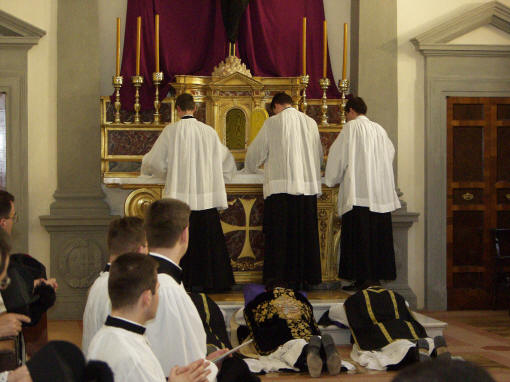 The priest and his two deacons, who wear folded chasubles rather than dalmatics, prostrate themselves before the altar for enough time to pray psalm 50, the Miserere, in silence, while servers spread a cloth on the altar. Like at Mass, the crucifix and candles remain on the altar, though unlit. 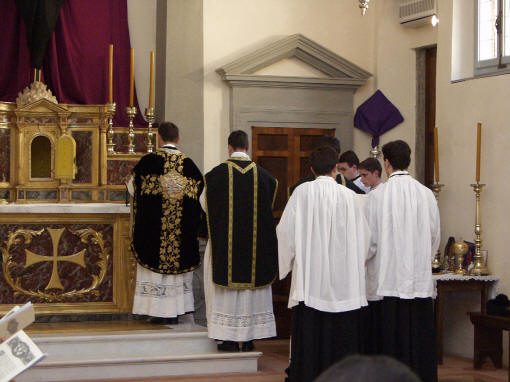 A lector sings a prophecy of the prophet Osee (or Hosea, in the Hebrew spelling), which foretells the suffering, burial, and third day rising of Christ. Then the subdeacon sings chapter 12 of the book of Exodus, which recounts the manner in which the finest lambs were killed during the first Passover in Egypt. This sacrifice liberated the Israelites from the bondage of the Pharoah. The sacrifice of the perfect victim, Christ, liberated the world from the bondage of death. God does not want a sacrifice because He wants things to be destroyed. A true sacrifice is the gift of what is precious to one's self unto another. This was the intent of the Israelites in Egypt, and more so on the Cross. A tract, psalm 139, is sung: Eripe me Domine ab homine malo—"Deliver me, Oh Lord, from the wicked man!" 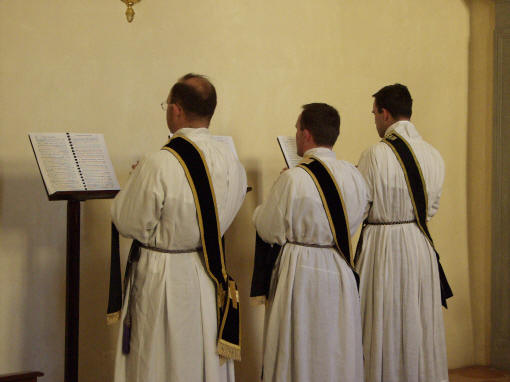 Three deacons then sing the Passion of our Lord Jesus Christ according to St. John, beginning with His arrest in the Garden and ending just after His death on the Cross. The deacon of the "Mass" removes his folded chasuble, as at Mass, and sings the burial of Christ as the Gospel, suggesting that this, not the general narrative, is the most important text of the day. 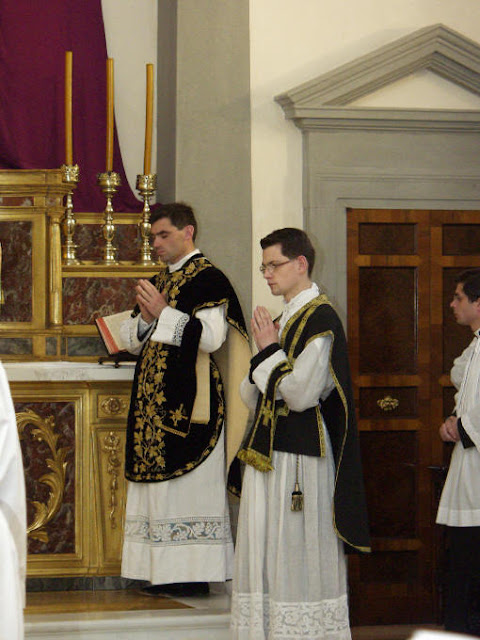 Priest and subdeacon listen to the Passion. 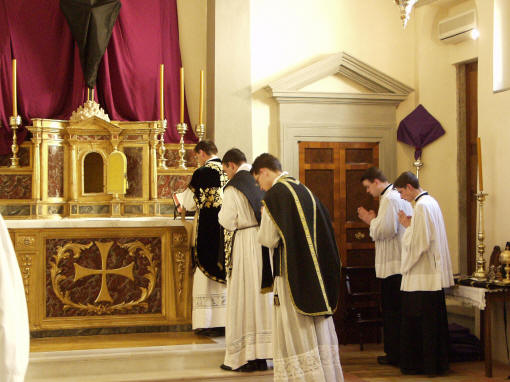 Then deacon, now wearing the "broad stole," returns to the other ministers. Returning to the epistle corner, the priest sings the Solemn Collects, some of the oldest continuously used prayers in the Church. Moreover, these prayers give us some indication as to what the structure of the Mass was like in the mid-first millennium and for what those Christians prayed. There is a preface to announce the prayer intention, followed by Oremus—"let us pray," Flectamus genua—"Let us kneel," and Levate—"Let us stand" before the actual prayer itself. 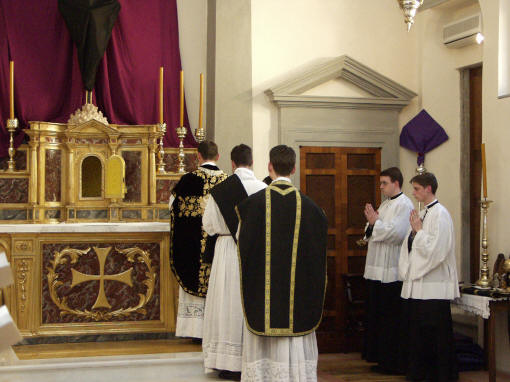 The prayer intentions were:
No genuflection was made during the prayer for the Jews. A genuflection was added by Pope John XXIII in the revised rite of Holy Week in 1959, although John XXIII seems to have continued to celebrate the old Good Friday in the Sistine Chapel! 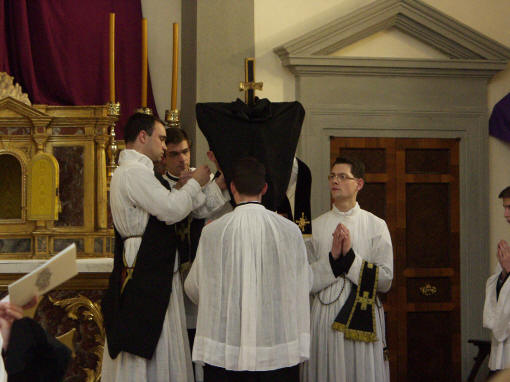 The ministers, probably for mobility in ancient times, remove their outer-most vestments and the deacon retrieves the veiled crucifix from the altar and gives it to the priest. The priest, beginning at the bottom of the epistle side, steps higher and towards the center of the altar, unveiling part of the crucifix and singing Ecce lignum crucis—"Behold the wood of the cross"—as he rises. The people respond In quo salus mundi pependit. Venite, adoremus!—"On which hung the salvation of the world. Come, let us adore!"
This happens three times, after which the entire crucifix is visible. It is then laid upon a pillow or cloth and adored by the people. First the priest, then the ministers of the service, then any other present clergy, and the servers. They all adore barefoot. Then the congregation adores, making three prostrations before their kiss of the cross. 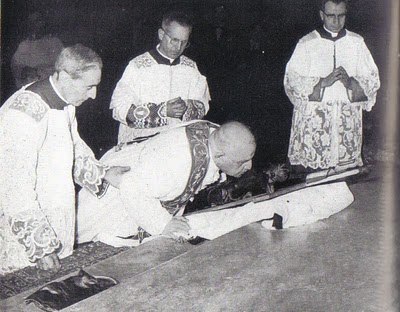 Although the Mass of the Pre-Sanctified supposedly died in 1956 under Pope Pius XII, John XXIII continued to use it in the Sistine Chapel, as seen in this 1959 celebration. 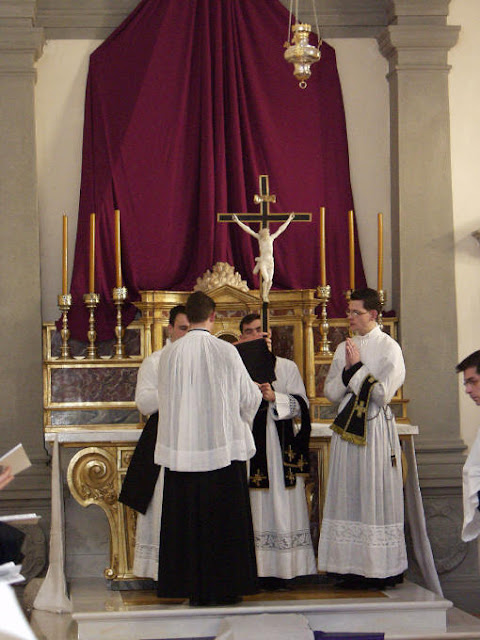 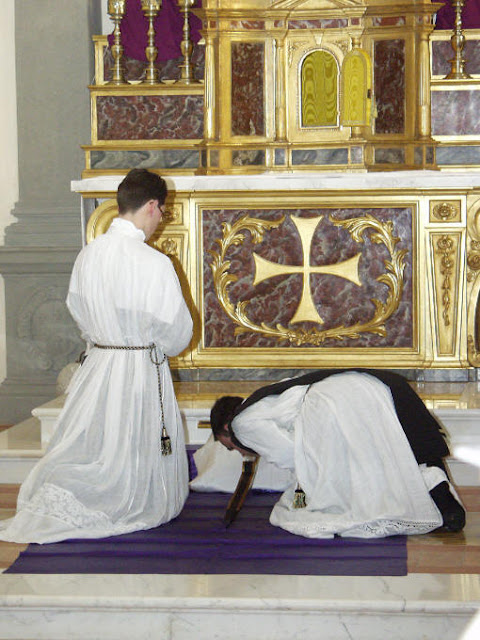 Whilst the laity make their adoration, the altar is prepared for the Mass of the Pre-Sanctified and the choir sings the Reproaches, which includes the Trisagion.
The crucifix is then placed upon the altar, where it would normally go, and is reverenced with a genuflection for the rest of the day. 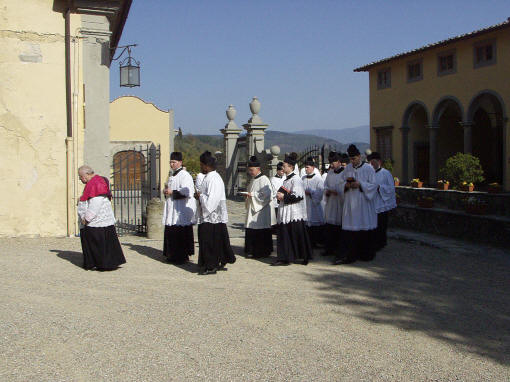 The clergy, and laity if they wish, process to the altar of repose, where the Blessed Sacrament has been over night. 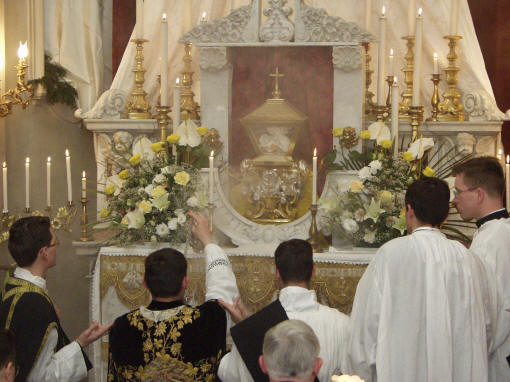 The Sacrament is then incensed by the priest, who assumes the hummeral veil and takes the Sacrament back to the main altar. 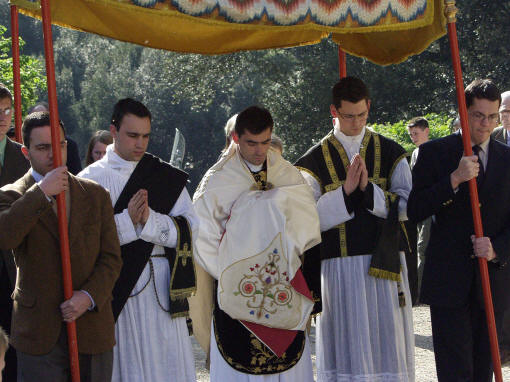 This is a full Blessed Sacrament procession, with incense and the processional cross carried before the priest and the Sacrament. The great hymn Vexilla Regis is sung. 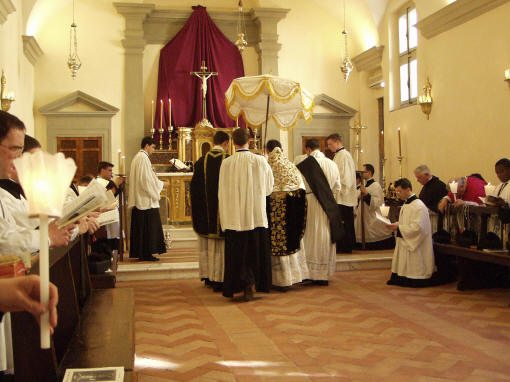 The procession returns to the main altar. 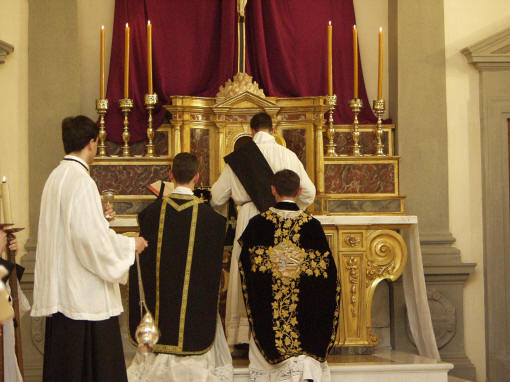 The deacon arranges the chalice and its veil, containing the Sacrament, as it would be at Mass. 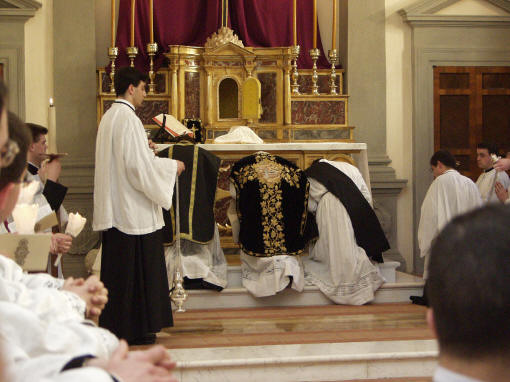 The Blessed Sacrament is then incensed by the celebrant. 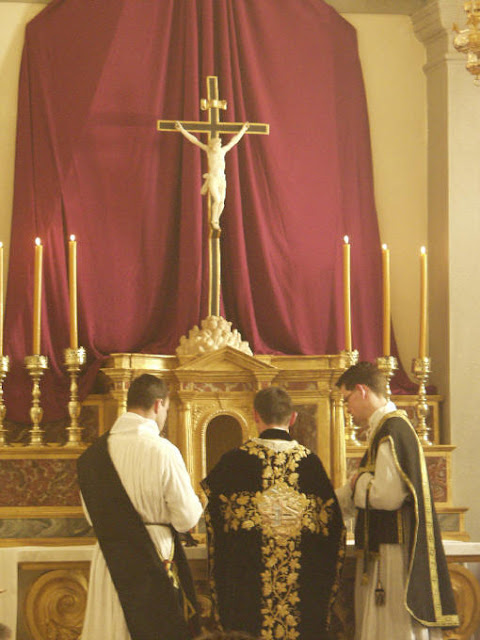 The subdeacon prepares the chalice with wine and water, as he would at Mass and the "Gifts" are incensed in the same way they would have been at a regular Mass. The priest turns to the people and says the Orate, fratres... ("Pray, brethren, that my sacrifice and yours....) as at Mass.
One English friend of mine always insisted that the Mass of the Pre-Sanctified is indeed an actual Mass. He had something of a point. Its prayers are those of a Mass. It is not a simple communion service. Although there is no consecration of the Host, the actions imitate those of a Mass in order to emphasize the relation between the Mass and Calvary, that they are one and the same sacrifice of Christ.

The celebrant then sings the Pater Noster, "Our Father," and elevates the Host for public adoration as he would after consecration at Mass. He then fractures the Host as at Mass and mingles a fragment of the Blessed Sacrament with wine. Liturgical reformers particularly disliked the pious medieval belief that the fragment consecrated the wine into the blood of Christ (which Eastern Catholics and Eastern Orthodox still believe). 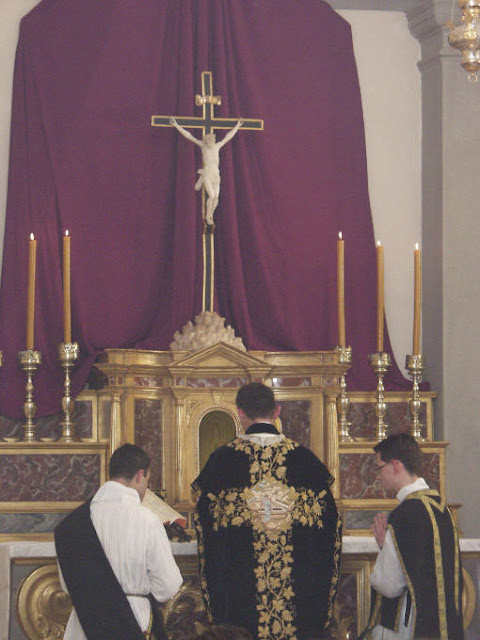 The priest then says the communion prayers of Mass and consumes the Host as normal. He consumes the chalice's contents saying nothing, leaving some mystery as to whether consecration occurred or not!
The priest purifies his fingers and the subdeacon cleans the chalice as normal at Mass.
Vespers, the same as yesterday except for the addition of mortem autem crucis ("even unto death on a cross") to versicle, are chanted in a monotone immediately.
The clergy then leave in silence.
This marvelous rite was replaced with a general communion services. The revised rites, from 1956 until 1969, involved a maddening three changes of vestments. Prayers and readings, in both the 1956 rite and the Pauline rite, take place at the chair, the altar, at a podium, and any where else you can find. Odd.
A blessed Good Friday to you all.
Posted by The Rad Trad at 11:22 AM