Papal Coronation Part I: The Entrance, Terce, and Vesting 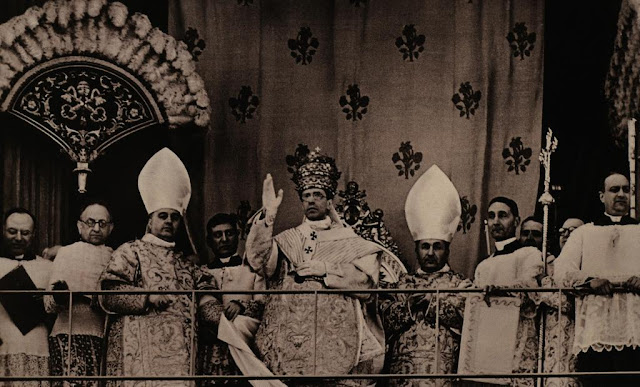 Given that the Sacred College of Cardinals is to convene next Tuesday to begin the process of electing the new Bishop of Rome, I thought it prudent to start our own series on the traditional rites of Papal Coronation, last used in variation by Paul VI in 1963 and last used in their full integrity by John XXIII in 1958.

The ceremonies are a magnificent display and series of prayers which blend the norms of a Pontifical Mass (Mass celebrated by a bishop) with elements which emphasize and explain the role of the Papacy. Some of these rites are very ancient, as are many of the vestments used, while some are baroque innovations which reflect the political and devotional moods of the Counter-Reformation, a defining era in Catholic history.

The Papal Coronation Office and Mass are votive liturgies, doubles of the first class. This rite may be celebrated on any day outside of the Sundays of Advent, of Lent, the first three days of Pentecost and Easter, Holy Week, Christmas Eve, and Christmas Day. This liturgy may even supersede most holy days. In fact the rubrics demand the Mass and coronation be celebrated on the nearest Sunday or Holy Day. Innocent III was crowned on February 22, the feast of St. Peter's Chair in Antioch, and Paul VI on June 30th, the commemoration of St. Paul. No commemoration is made of the replaced day.

The coronation takes place in St. Peter's basilica. Before the Italian revolution the newly elected Pope would be escorted to the Lateran Cathedral and enthroned immediately, and his coronation would take place at St. Peter's on a different date. This emphasized the two pronged nature of the Petrine ministry: Bishop of Rome and successor of Peter as Prince of the Apostles. If the elected candidate was not yet a bishop, the Cardinal-Bishop of Ostia would consecrate him immediately, in the Sistine Chapel. In some cases though, like Innocent III and many first millennium Popes, the enthronement would take place before the consecration, as bishops would have to be brought to Rome from outside the city. The account of Innocent III's coronation given by Achille Luchaire in Innocent III: Vicar of Christ or Lord of the World? suggests that the consecration occurred at St. Peter's but, in a breach of what we would now consider normal, the Pope said Mass and not the consecrating bishop.

The procession into St. Peter's is preceded by the standard servers of Mass, who, when the Pope says Mass, are members of the Papal Household, since abolished by Paul VI. Then follow the Canons of St. Peter's Basilica, then the attending bishops, followed by cardinals in choir dress, then the ministers of the Mass, and finally the Pope, carried on the sedia gestatoria, flanked by two large fans made of ostrich feathers, and surrounded by members of the various Roman honor guards for security.

The ministers of Mass are: the Latin and Greek subdeacons, the Latin and Greek deacons—all fully vested according to to their rites, the deacons of honor, the assistant priest, the chaplains, the masters of ceremony, and the celebrant—the Pope. These roles, except for the Greek ministers, would be filled according to one's place in the Roman Curia: remember, this is a Mass said by the Pope and served accordingly by his brethren. The Greek ministers would typically be conscripted from the Byzantine monastery in Rome, which exists to this day.

The Pope, carried on a portal throne called the sedia gestatoria, is vested in alb, amice, stole, cross, cincture, mantum (a very long cope), and mitre. The procession begins in the sacristy, where St. Pius X would have just finished a long drag on his last cigarette, winds down the Scala Regia, and enters the narthex of the Basilica. Here the Pope is set down and the Canons (permanently stationed priests) of St. Peter's Basilica offer obeisance and fidelity to the Pope by kissing his feet.

The procession then enters the Basilica to the blasts of trumpets, a baroque vulgarity if I may say. Although liturgical piety would seem to demand some solemnity, in practice the more recent coronations began and ended with booming applause.

Midway through the Basilica the procession would halt again and the Pope would go to the Blessed Sacrament chapel on the North side for a few minutes of quiet prayer. There are no specific prayers prescribed. This is likely a private practice of the Popes, a moment to ask humbly for Divine guidance, and perhaps some help enduring the long, grueling ceremonies about to ensue.

In the image below you can see just how big and long the mantum, that large cope, actually is. So large that it must be draped over that kneeler, called a faldstool.


Traditionally, as this was the first time the Pope appeared to the masses gathered within the Basilica, the choir, more recently called the Sistine Screamers, would sing Tu es Petrus to some polyphonic setting. In the video of John XXIII's coronation the setting was written by Perosi and, as one blogger put it, "massacred" by Msgr. Bartolucci's Sistine Shriekers.

The Pope returns to the sedia gestatoria and is carried, with more vulgar horns set to something masquerading as music, to the altar of St. Gregory the Great in the south transept of the Basilica, to the right of the high altar if one were to look at it oriented.

At this altar the Pope once again prays at a faldstool for guidance and then assumes a small throne constructed for Terce and vesting, which at any non-Roman church would have been done in the Lady Chapel. St. Peter's does not have chapels as much as it has an endless maze of altars.

Here the cardinals greet the Pope, kneeling before his throne until the Pope tells them to stands. Eastern Catholic Patriarchs were often allowed to simply genuflect, so as to preserve some level of respect for their offices. The cardinals would be in choir dress, which, before Paul VI's reforms of ecclesiastical dress, meant wearing a long, hooded silk cape called a cappa magna. These were usually twenty feet long. Pius XII shortened them in length by over half and John XXIII promptly undid this policy. The Institute of Christ King seems to prefer for their celebrants' cappae magnae to spread from Tuscany through Sicily.

The chaplain holding the liturgical texts and the candle-bearer approach the Pope who, reading the chants from the book, intones Deus in adiutorium meum intende, the beginning of the third hour of the Divine Office, Terce. The hymn is St. Ambrose's Nunc Sancte nobis Spiritus, of which I have lifted a translation by John henry Cardinal Newman from Wikipedia for your perusal below.

Come, Holy Ghost, Who ever One
Art with the Father and the Son;
Come, Holy Ghost, our souls possess
With Thy full flood of holiness.
In will and deed, by heart and tongue,
With all our powers, Thy praise be sung;
And love light up our mortal frame,
Till others catch the living flame.
Almighty Father, hear our cry
Through Jesus Christ our Lord most high,
Who with the Holy Ghost and Thee
Doth live and reign eternally.


The psalms are festive (excerpts from psalm 118), or, before St. Pius X, normal! The cantors give the dismissal, Benedicamus Domino, as normal, but there is no versicle prayer for the dead, as Mass follows. The Terce from John XXIII's coronation is below. One will note that while Msgr. Bartolucci had laid waste to the instrumental and polyphonic music after just two years as choir director, he had not yet harmed their marvelous singing of plainsong chant.

As always at pontifical Masses, the bishop, or Pope in this case, vests for Mass following the singing of Terce. John XXIII's vesting is not really shown in the video series from which I have taken an extract above. This is likely a courtesy matter. I remember at one of then-Pope Benedict XVI's audiences his assistants would always surround him so as to block him from view whenever he drank water or ate something. I was close enough to see what was happening, though.

The vestments of the Pope are mostly those of a bishop, but with some exceptions and additions. In addition to the alb, that white robe underneath the main vestments, the Pope wears a maddeningly long second alb, or skirt, called a falda,  so as to outdo the cardinals' cappae magnae. The Pope vests with the tunicle and dalmatic, vestments of subdeacon and deacon, then the chasuble, the vestment of the priest. He ties a cincture, a rope, around his waste under the chasuble, to which is attached an odd wad of loose material called a subcinctorum, the significance of which is lost on me even though it dates to the eleventh century or earlier.

Over his chasuble the Pope puts the fanon, a gold and silver striped shoulder cape which was the forerunner to the amice but, like the maniple, retained use after its practical purpose was adopted by other devices. Originally used to simply cover the neck, the fanon, recently returned to use by Benedict XVI, holds the pallium, in place without damaging the chasuble. While one may say even that practical use is gone, it is a unique vestment to the Papacy and reminds us that the Pope has a unique role in the Church distinct from other bishops. The Pope does not yet assume the pallium, nor does he assume the maniple, that towel-like vestment that goes on the left arm. The Pope's maniple is traditionally embroidered with red and gold threads: red for the blood of the Roman martyrs and gold for the heavenly theology of the Eastern Churches.
The Pope returns to the sedia gestatoria again, imparting his blessing as he passes the congregated faithful, to make the slow move 100 feet northward to the high altar. A lantern burning flax is carried immediately in front of the Pope, symbolizing the evanescence of things in this world. Three times the procession stops and the torchbearer exclaims to the Pope "Pater Sancte, sic transit gloria mundi" ("Holy Father, thus passes the glory of the world"). The last of these addresses would take place before the confessio, the entrance from the ground floor of the Basilica into St. Peter's tomb.

The procession would finally reach the steps leading to the high altar of St. Peter's basilica, where we will leave off for now, as the Mass is about to begin....
Posted by The Rad Trad at 2:27 PM