Neo-Calvinism in the Catholic Church UPDATED 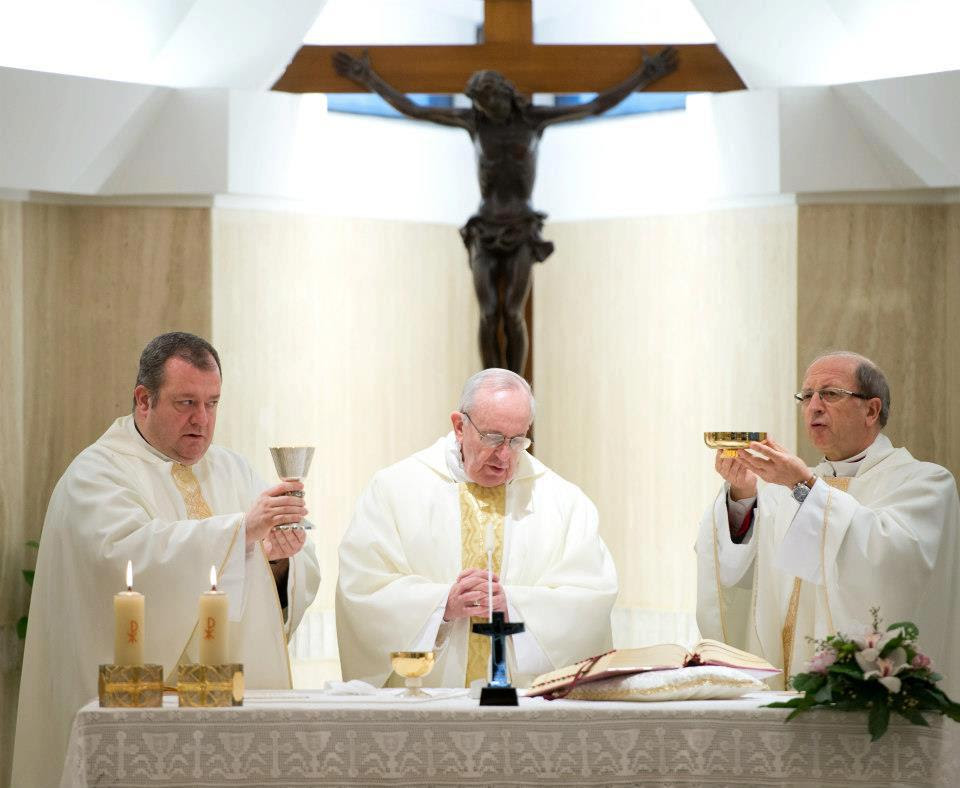 Surely you have noticed it. It entered some time in the wake of Cornelius Jansen, but was soon enough subdued by the baroque Vatican establishment. A few centuries later it insinuated the Church again, this time through Pope Paul's "fissure in the wall" of the "temple of God." What was the not great condescension, the reduction of the faith and the liturgy to a communitarian minimalism which obsessively compels all to be reduces to equal misery. It is Catholic neo-Calvinism and it is what has happened in the Church in the last few years.

When the liturgy began to change under the experimentation of the Liturgical Movement in the early 20th century and came to a head in the years after the Second Vatican Council, most Catholics understandably—but wrongly—assumed the impetus was an alignment with modern protestantism. FSSPX, independents, Michael Davies devotees, and sedevacantists will quickly adduce the old quote from Jean Guitton's radio interview in which he states Pope Paul's intention was to make the Catholic liturgy "almost coincide with the protestant liturgy." The more revealing line comes later, when Guitton specifies Papa Montini wanted to approximate the Roman rite with the "Calvinist Mass."

The liturgical experience of the average Roman Catholic parishioner was reduced so that all might participate. The reformers assumed, in their pastoral concern, that only the absolute minimum would be suitable for congregational involvement and Pope Paul's Mass and Office reflect that concern precisely. The mere fact of a reform rather than a translation reveals the deeper concern: to participate fully, there must be reduction, trimming, and discarding of all that stands in the way of the few essentials.

Reformers took the extant outline of the Mass (entrance, a confession of sins, the orations, readings, offertory, consecration, Communion, dismissal), concluded that "Word" and "Eucharist" are the only points of the Mass, and filled in between the lines with as few colors as possible. Reformers in previous eras like Rosmini had hoped for simplifications to make the Ordo more logical, like flipping the Last Gospel and dismissal. Jansenists, too, had hoped for reductions in the liturgy to aid communal involvement. The removal of side altars, many statues, the hope for only one Mass celebrated in a given church in a day (violation of many ancient practices), and a fascistic concern for what "the people" were doing all came after the private pietism of the Counter-Reformation, an understandable problem, but a problem none the less. This reduction and simplification can be quite expensive. One wonders how many hundreds of millions of dollars were spent smashing sanctuaries worldwide from the 1950s onward. How much money did St. Peter's Basilica spend on five dozen ugly polyester gothic chasubles in the 1970s, when the old vestments were sent to the basement?

Liturgical and pastoral reform did not succeed in re-invigorating the faithful. The coincidence of the Liturgical Movement with the ecumenical movement spelt disaster for the former. While the efforts of de-construction were doomed to fail, the new found friendliness to protestants and "the world" gave the ever decreasing number of faithful the impression that the Church was eliminating its beliefs and teachings, that she was adopting to the age and not taking her former self too seriously.

Pope Paul may well have lived the rest of his life in regret for the irreparable damage that took place during his reign in the 1960s and for the part he played under Pius XII. What was banal under Paul became outright bad under John Paul II. Then came Benedict XVI and we thought we had a breath of fresh air. A new, vocal minority found interest in concepts like beauty and sacredness again. Msgr. Guido Marini made Papal Mass watchable on television again for the first time since 1964. With Benedict's favoritism towards Cardinal Scola, one had reason to assume tolerance for traditionalists would continue in the next pontificate. Then the College elected Pope Francis.

During the announcement, I mistook "Bergoglio" for "Bagnasco." "...sibi nomen imposuit Francescum" suppressed my short-lived elation and forebode a frustrating papacy. From the first Mass in the Sistine chapel until today, Pope Francis' liturgical [lack of] effort and administrative initiatives reflect a resurgence of the neo-Calvinism that swept the French Church during the Counter-Reformation and the Liturgical Movement in the 20th century. Jorge Bergoglio is the first pope since the fifth century not to celebrate some variation of the old Ordo Missae. He was ordained two weeks after the new Ordo superseded the modified 1965 Ordo. He was educated during the worst period in the history of the Society of Jesus. And among his predecessors, the one he most quotes is Paul VI. The current pontificate has become a parody of the worst of neo-Calvinism and the tragedy of Pope Hamlet.

The inevitable appointment of Msgr. Piero Marini to the Congregation for Divine Worship, the removal of Cardinals Burke and Llovera, the promotion of the Kasper doctrine, and the immunity of Cardinal Dolan in New York all converge into a strange neo-Calvinism, one far worse than the Jansenism of the 18th century. This reductionism removes all trappings, customs, images, and sounds of beauty and depth of the faith, again exposing the bear minimum. This time, the reduction is not part of a misguided pastoral attempt at getting the faithful to respond to Dominus vobiscum. This is a political attempt to remove anything in the Church bothersome to "the world" out there. It means the removal of laws, liturgical practices, vestments, discipline, and sensibility. We will be left with the Bible, the [ignored] Catechism, a reformed Missal, and a smile. We know what the Pope wants in the immediate run: Communion for those no longer living their proper marriages. It would not be wrong to ponder what he wants next, beyond this obstacle. What will be the next vestige of "self-absorbed promethean neo-pelagianism" to be cast aside so as to show the world that we are not really that scary or serious after all?