Continuing our examination of Nativity narrative cycles jumps us a few centuries ahead to somewhere in the A.D. 400-600s range with the Gospel of Pseudo-Matthew, or the Book about the Origin of the Blessed Mary and the Childhood of the Savior, as it was known in antiquity. As noted in earlier posts, there was a line of Infancy narratives that had more to do with unorthodox and Gnostic influences than any plausible orthodox traditions. This retelling we’re looking at now combines the more plausible Proto-Gospel of James with the blasphemous Infancy Gospel of Thomas in ways that unfortunately would be influential for many centuries.

Prefacing the text is a correspondence between St. Jerome and the bishops Cromatius and Heliodorus. Or so it claims. Even though these letters of Pseudo-Jerome have some pretension of scholarly fairness in expressing doubts against any absolute certainty concerning this text, he does concede that it was possibly written by “the holy Apostle and Evangelist Matthew himself” in Hebrew as a preface to his canonical Gospel. He also says that the stories contained within “can be believed and read without damaging their faith or imperilling their souls.” Considering how dismissive the real Jerome was about the Proto-Gospel of James (“the ravings of the apocryphal accounts”), it seems impossible that he would be so casual about a retelling of the Proto-Gospel combined with outright blasphemous stories. The Jeromic forger probably knew of this Doctor’s hatred of anything non-canonical, and used it to his advantage to ease any suspicions about this text.

Chapters 1-17 are a retelling of the Proto-Gospel with a few interesting changes:


Chapters 18-25 are a new addition to the Infancy narrative cycle, detailing an account of the Flight to Egypt and what happened in that country. As far as I know, there are no written precursors to these stories. Here, the Christ Child tames a cave full of dragons, wild cats and other beasts follow the pilgrims tamely through the desert, Jesus miraculously shortens the road to Egypt, all the Egyptian idols bow before the Child and shatter, and the governor of the city is converted. 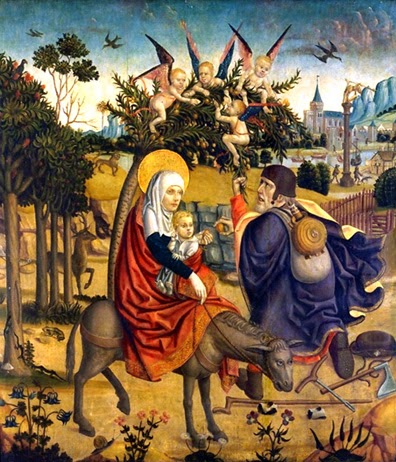 Most important for posterity is the story of the palm tree (20-21). Taking their rest beneath the shade of the tree along the road, Mary looks hungrily at the fruits in its high branches, and declares her wish that she could eat some. Joseph says this is impossible, and is worried more about replenishing their water. But the Christ Child asks the tree to bend down and allow his mother to taste of its fruit. It obeys, Mary eats, and Jesus rewards the tree by commanding his angels to carry a shoot of its branches into Paradise where it will flourish forever. This story would become very popular, and in England it eventually became the Christmas song The Cherry-Tree Carol.

Chapters 26-41 are a retelling of the Infancy Gospel of Thomas with a few minor changes, but nothing to make the stories acceptable for an orthodox readership. One small change to Joseph’s character is his initial reluctance to chasten Hermus: “I dare not speak to him; but you [Mary] must admonish him, and say: Why have you raised against us the hatred of the people?” (26). Joseph also cooperates with Hermus in performing a miracle of resurrection for another man named Joseph (40).

Chapter 42 is a brief coda describing a feast shared with Joseph’s children and Mary’s side of the family. It serves little purpose but to describe their family trees in moderate detail. (Joachim and Anne apparently had a second daughter they also named Mary because they missed their first daughter, and this second Mary is the one who had other children and stood at the foot of the Cross.)

St. Joseph has more to do in Pseudo-Matthew than in some Infancy narratives, thanks mainly to the additions for the Flight into Egypt which would become so popular in art and iconography, especially among Egyptian Christians. He comes off slightly worse than he did in the Proto-Gospel, where he is a man of moderately better character. If the Gnostic additions are ignored, he is an almost buffoonish player, an aspect that would only increase in the popular Catholic mind over time.

Next time, we discover the roots of devotion to St. Joseph as the patron of holy deaths.