“Anyone who speaks about St. Joseph in the early Church should begin with a warning to his hearers: don’t expect too much. For the first millennium of Christianity, St. Joseph was all but ignored in preaching, liturgical celebrations, martyrologies, and theological writing.... To our knowledge, no Father of the Church ever preached a homily on St. Joseph.” –Joseph T. Lienhard, S.J., St. Joseph in Early Christianity

I will be relying somewhat on Fr. Lienhard’s short work throughout this post. He was a strong promoter of Josephite devotion, and he has scoured the patristic era for even the slightest hint of positive writings on St. Joseph. Likewise, the Oblates of St. Joseph have a similar collection of texts, beefed up with endless commentary on their website. Promoters of the “young and pure” version of St. Joseph are at a loss to find their beliefs in the early Church, but will stretch any inch into a mile.

When Joseph is mentioned at all in patristic texts, it is almost always as an ancillary character in their Nativity sermons. A few of the Fathers go out of their way to argue that Joseph was the true husband of Mary, and not just her betrothed or her protector (e.g., Irenaeus, Ambrose, Augustine), although some argue explicitly against theirs being a true marriage (“She is called the mother of Christ... not the wife of Joseph, for that she was not” –St. Hilary, Commentary on Matthew). The Fathers are, however, unanimous in stating that Joseph and Mary never shared marital relations, and that Mary remained virginal in all their time together. 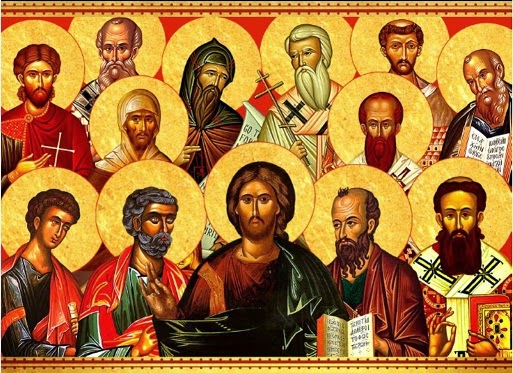 Those few Fathers who did write about Joseph were largely in agreement about his great age and his previous, fruitful marriage. The OSJ website gives this list of Fathers who wrote that the “brethren of the Lord” were Joseph’s natural children from a former marriage: Origen, Epiphanius, Gregory of Nyssa, Cyril of Alexandria, Theopylact, Theodoret, Chrysostom, Ambrose, and Hilary of Poitiers.  A few selections from these theologians follow:


“They thought, then, that He was the son of Joseph and Mary. But some say, basing it on a tradition in the Gospel according to Peter, as it is entitled, or The Book of James, that the brethren of Jesus were sons of Joseph by a former wife, whom he married before Mary. Now those who say so wish to preserve the honour of Mary in virginity to the end.... And I think it in harmony with reason that Jesus was the first-fruit among men of the purity which consists in chastity, and Mary among women; for it were not pious to ascribe to any other than to her the first-fruit of virginity.” –Origen (c. 184-253), Commentary on Matthew, 17.

“If there had been sons of Mary who were not rather produced from a previous marriage of Joseph’s, Mary never would have been transferred to the apostle John as his mother at the time of the Passion.” –Hilary of Poitiers (c. 300-368), Commentary on Matthew, 1.4.

“Joseph took his first wife from the tribe of Judah and she bore him six children in all, four boys and two girls, as the Gospels according to Mark and John have made clear.” – Epiphanius, Against Antidicomarians, 7.6.

“The ‘brethren of the Lord’ could have been born from Joseph and not from Mary.  This indeed anyone will find if he looks at the question more diligently.” –Ambrose of Milan (c. 340-397), On the Birth of the Virgin and the Perpetual Virginity of Mary, 6.43.

“But as he considered that he had a share in the august titles of the Apostles, he exalts himself by honoring James; and this he does by calling him the Lord’s brother, although he was not by birth His brother, but only so reputed.” – John Chrysostom (c. 349-407), Homily 1 on Galatians.

“The reputed brethren of the Saviour not yet recognizing God the Word indwelling in His Holy Flesh, nor knowing at the time when they are saying these things, that He was made Man, have still petty conceptions of Him and think far too little of the grace and excellence that is in Him, seeing nothing more than the rest, deluded by the common opinions of Him, thinking that He too was in truth begotten of their father Joseph, and not seeing the hidden provision of the Mystery.... Very watchfully did the Prophet [Jeremiah], having named His brethren, profitably add, ‘The house of Thy father,’ lest they too should be supposed to have been of the blessed Virgin, rather than of His father Joseph alone.” –Cyril of Alexandria (c. 376-444), Commentary on John, IV.461-2.

“The Lord had brothers and sisters, the children of Joseph which he begat by the wife of his brother Cleopas. For when Cleopas died childless, Joseph took his wife in accordance with the law and had six children by her, four boys and two girls, Mary, who was called the daughter of Cleopas, in accordance with the law, and Salome.” – Theophylact (c. 1050-1108), Explanation of the Gospel of Matthew, 13.54-57. 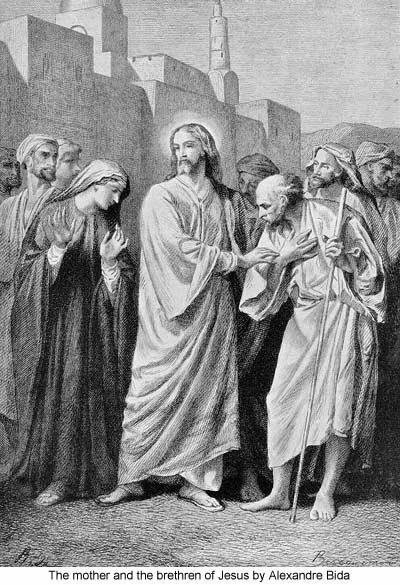 All these patristic witnesses are supposedly swept away by the authority of St. Jerome (c. 347-420) in one tract he wrote defending the virginity of Mary, Against Helvidius:


If we adopt possibility as the standard of judgment, we might maintain that Joseph had several wives because Abraham had, and so had Jacob, and that the Lord's brethren were the issue of those wives, an invention which some hold with a rashness which springs from audacity not from piety. You say that Mary did not continue a virgin: I claim still more, that Joseph himself on account of Mary was a virgin, so that from a virgin wedlock a virgin son was born. For if as a holy man he does not come under the imputation of fornication, and it is nowhere written that he had another wife, but was the guardian of Mary whom he was supposed to have to wife rather than her husband, the conclusion is that he who was thought worthy to be called father of the Lord, remained a virgin. (21)

But this must be taken in context, for Jerome was writing in response to an outrageous heretic who was claiming all manner of impropriety against Our Lady: to wit, that she had engaged in marital relations with Joseph and had herself borne many more children, who are listed in the Gospels as the “brethren of the Lord.” Jerome’s tone is over the top in its counterclaims, and this is evident even from his first paragraph:


It is a difficult matter to maintain the truth and refute an ignorant boor who has scarce known the first glimmer of learning.... There was the further consideration that a turbulent fellow, the only individual in the world who thinks himself both priest and layman, one who, as has been said, thinks that eloquence consists in loquacity and considers speaking ill of anyone to be the witness of a good conscience, would begin to blaspheme worse than ever if opportunity of discussion were afforded him.... The axe of the Gospel must therefore be now laid to the root of the barren tree, and both it and its fruitless foliage cast into the fire, so that Helvidius who has never learned to speak, may at length learn to hold his tongue. (1)

His anger is well-founded, but in his zeal to defend Mary’s honor he invents many arguments for the “brethren” to be the cousins of Christ (thus giving Mary a wide berth), attacks events from the Proto-Gospel of James as “the ravings of the apocryphal accounts” (10), presumes that this book is the only reason for the belief in Joseph’s previous marriage, and then discards the belief itself entirely. Much in the way that modern-day Josephites claim that belief in Joseph’s previous marriage and older age was concocted merely in order to preserve Mary’s virginity, so does Jerome remove it in order to preserve the very same thing! He wants the “brethren” a safe distance away in the family tree, and so eliminates the necessity for Joseph to have been married previously, making him a virgin at his betrothal to Mary.

Thus does Jerome create a virginal St. Joseph out of thin air.

There is no clear evidence that St. Augustine (354-430) agreed with Jerome, in spite of claims to that effect. However, in his Exposition of the Epistle to the Galatians he writes that “James the brother of the Lord should be taken either as one of the sons of Joseph from another wife or as one of the relations of Mary his mother” (8.5), thereby leaving open the possibility that the “brethren of the Lord” were not the sons and daughters of Joseph. That seems to be the closest thing to agreement that Jerome found among his patristic peers.

Needless to say, the East was unchanging in the tradition that Joseph was a widower and a father before his betrothal to Mary. In the survey by Fr. Florent Raymond Bilodeau on the OSJ website, however, we get a bit of Latinizing peevishness in this regard:


This list [of Fathers], at first sight, seems to outweigh the evidence we have just presented. However, a closer look at the statements of these men gives us a different impression. First of all it is important to note that most of them, save Ambrose and Hilary of Poitiers, were Greek Fathers. The Eastern Fathers were highly influenced by the Apocrypha, a group of writings of a religious character which at times made pretensions to divine authority. These writings elaborate on Saint Joseph. Very little of what they say is of historical value. (source)

It is unfortunate to see an apologetical work treat the Eastern “lung” of the Church as a bunch of gullible chumps. There may be an Eastern theologian here or there who speculates on the possibility of the Lord’s brethren having sprung from someone other than Joseph, but the overwhelming majority retain the traditional belief to this day. If for no other reasons than ecumenical ones, we should take that seriously.

Next time, we will make a survey of those few theologians who were convinced of Jerome’s novelty before it was more widely popularized by St. Thomas Aquinas.