Concelebration has been abused in the West since its reintroduction in 1964. Originally an act of unity between the priests and their bishop, it has become a quick and normal setting for the celebration of Mass in the parish and at large events. The modern manner of concelebration involves the concelebrants sitting off to the side, inactive, until the anaphora, at which point they utter every single word said by the celebrant. After Communion, which they may or may not distribute based on the number of church ladies trying to get their part, the concelebrant disappear again. This is a clear misuse of an ancient practice which, given how the Roman rite evolved since the 9th century, may not have been wise to re-introduce without very stringent guidelines.


Much of this likely existed in the Roman church in the first millennium when the Canon of Mass was still sung in the preface tone, allowing the concelebrants to sing particular parts. Concelebration likely died on a large scale when priests began to recite rather than sing the anaphora, but the practice did not disappear overnight. As late at the 13th century Innocent III reports concelebration of the Cardinal-Priests with the Pope. In the Papal rite of Mass as well as in Pontifical Mass according to local usages, present priests vest in chasuble, stole, and maniple as for Mass and function as attendants to the celebrant. In the Papal rite as in the neo-Gallican rites the "concelebrants" join around the altar according to one's place in holy orders: bishops at the footpace, priests below them, and deacons lower still. On Holy Thursday, before Pius XII, twelve priests joined the bishop in breathing on the oil that was consecrated as holy chrism during the Canon of Mass itself.

Concelebration in its ancient form and in the rites of local usages that retained a whisper of the older praxis had a value unto themselves. These rites made the full unity of the local church visibly present before the faithful and God. This simple fact makes this one point out of an otherwise good book and review something of a head-scratcher:

The author reaches many important conclusions in this work of highly readable scholarship. Among the more immediately practical conclusions are: (1) although concelebration is licit and occasionally opportune, particularly when the presbyterate is led in worship by the bishop, it was never historically, and should not now be, the normal or default mode of offering the Mass; (2) much of our contemporary theory and praxis are based on a fundamentally flawed concept of what concelebration historically was—a flaw that found its way into the Council debates and subsequent implementation; (3) in either sacramental or ceremonial concelebration, no differently than in a ‘private’ Mass, one sole Mass is offered to God; (4) because “each Mass pours the redemptive Blood of Christ upon the Church and the whole world,” the Church and the world benefit from a multiplication of Masses and suffer loss from their reduction; (5) it can be demonstrated from documents of Tradition and of the Magisterium that the Church herself greatly desires that Masses be thus multiplied


One wonders why when a new pope was elected, the attending clergy dispensed with private Masses and the Office in favor of one great Mass celebrated by the Pontiff amidst his brethren. 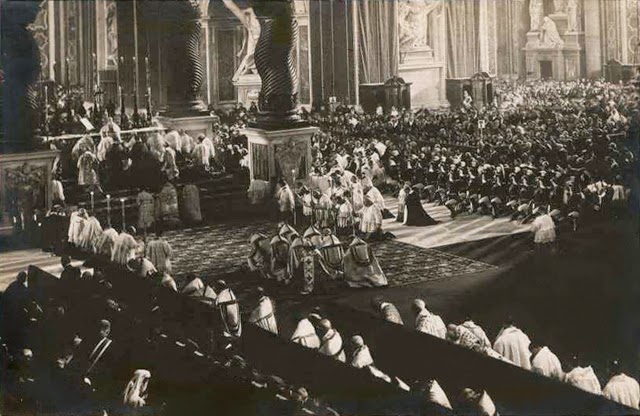