Josephology Part 10: Francisco Suárez and the Order of the Hypostatic Union

A contentious figure in many respects, Francisco Suárez (1548-1617) was a well-learned Spanish scholar, philosopher, and theologian of the scholastic tradition. He taught in many cities, was by many accounts given to acts of great penance, and was even invited by P. Paul V to refute the errors of King James of England. Later Thomists make reference to Suárez with some regularity even to this day. Like all brilliant men, he was not content merely to learn, but was driven to develop his own school of thought, called “Suarism” by some.

While the majority of his ideas are beyond my own ability to critique or absorb, and even though the majority of his works appear to remain untranslated into English for our benefit, there are a few oddities about his legacy that are relevant to the subject at hand. One of his obsessions was developing the theology concerning the Blessed Virgin, particularly the nature and extent of the graces imparted to her. The commonly found opinion that the graces of the Virgin are greater than the graces of all the angels and saints combined appears to have originated with Fr. Suárez. He also developed the idea of the Order of the Hypostatic Union, which he uses in his Life of Christ to describe the graces give to St. Joseph:


There are certain ministries which pertain precisely to the order of sanctifying grace, and in this order, I see that the apostles occupy the place of highest dignity, and that in such a place, gifts of grace are necessary (above all of wisdom and of grace: gratis data) superior to the gifts of others. There are, however, other ministries found within the order of the hypostatic union (an order of itself more perfect, as we have said elsewhere, treating of the dignity of the Mother of God) and, in my opinion, it is within this order that the ministry of St. Joseph must be situated, even if it occupies the lowest place there; and for this reason, his is a dignity superior to the highest in other orders because he is in a higher order. (De mysteriis vitae Christi in tertiam partem divi Thomae, tomus secundus, disp. VIII, Sec. 1.; quoted by Don Joachin Ferrer Arellano, “The Virginal Marriage of Mary and Joseph according to Bl. John Duns Scotus,” in Blessed John Duns Scotus and His Mariology (2009), p. 383, note 33) 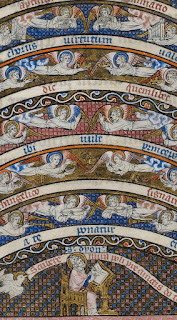 What is the Order of the Hypostatic Union? Its proponents reference an article in the Summa (I.108.6) describing the celestial hierarchy of the angels, but I have found no original reference in Thomas to this particular order. The twentieth-century Thomist Fr. Garrigou-Lagrange says that the ordained divine power operates within three orders: the natural, the supernatural, and that of the hypostatic union (cf. Christ the Savior, p. 88). This third order is something that operates above and beyond even the already extraordinary order of sanctifying grace; the super-supernatural realm, if you will, in which the mystery of God made Man takes place.

This third realm is where the Blessed Virgin received such graces as to exceed the combined graces of all the blessed in Heaven, by virtue of her Divine Maternity. It is also where St. Joseph supposedly received the graces to exceed all other saints, by virtue of being the spouse of the Virgin, and by the necessity of performing the ministry of protector of the Incarnate Word.

It is an interesting work of theological speculation, to be sure. Many later Thomists, like Garrigou-Lagrange, seem to take the Order of the Hypostatic Union as a given. Edward Healy Thompson popularized—and perhaps banalized—it in his Life and Glories. Taylor Marshall has blogged in recent years about the importance of this order in regards to Josephology.

Unfortunately, it is an idea that seems to be used as a sort of “black box” for theological speculations. I have not found any precisely agreed upon definition of the Order of the Hypostatic Union, and it seems to morph slightly depending on the theologian using it. Garrigou-Lagrange uses it occasionally when writing about Christ, but most often it is used to defend the hyper-exaltation of Joseph among the saints.

If Joseph is hyper-exalted because of his proximity to the mystery of the hypostatic union, why not also John the Baptist (who preached the Incarnate Word even from the womb), or Elizabeth (who named the pregnant Mary the mother of her Lord), or Simeon (who circumcised the Christ Child), or Joachim and Anne (the parents of the Second Eve), or David (ancestor and messianic type of Jesus), or Gabriel (who announced the Incarnation itself)? It’s a fascinating idea in concept, but I do not think it predates Suárez in any substantial way, and it has only really gained traction among Josephite devotees.

But there is also a cultural momentum at play. The Hispanic lands began developing Josephite devotion much earlier and with greater fervor than the rest of the Church. In 1555 Joseph was named patron of the conquest of Mexico, and in the 1670s the Spanish King Charles II replaced St. James with Joseph as the patron of his kingdom. From the early 1600s Spanish and Mexican artists began producing more images of the Holy Family, often changing his appearance from an elderly to a younger man. St. Teresa of Ávila (in Spain), about thirty years Francisco’s senior, worked to popularize Josephite devotion after receiving a miraculous cure from this saint. Suárez was thus working within the religious culture of his time and place, perhaps striving to find a theological apologetic for the growing devotion to the Stepfather of Christ and to the Holy Family. Even to this day, devotion to Joseph seems to be the strongest in Spain and among other Spanish-speaking Catholic communities.

The influence of Francisco Suárez on later Josephology should not be underestimated, although he was part of a much larger devotional movement. His own work is largely neglected outside of the few remaining Thomistic schools, and even then he rarely seems to be studied in his own right. One wonders if he had any inkling that his many volumes of work would be forgotten aside from a few developments in Marian and Josephite devotion.