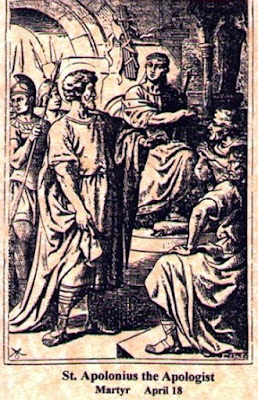 Today marks the traditional commemoration of a certain St. Apollonius (one of many bearing that name), a Roman senator sentenced to death under the Emperor Commodus in the late second century after he had been betrayed by a servant. St. Jerome writes a brief hagiography in his De Viris Illustribus:


Apollonius, a Roman senator under the emperor Commodus, having been denounced by a slave as a Christian, gained permission to give a reason for his faith and wrote a remarkable volume which he read in the senate, yet none the less, by the will of the senate, he was beheaded for Christ by virtue of an ancient law among them, that Christians who had once been brought before their judgment seat should not be dismissed unless they recanted. (ch. 42)

Eusebius also has a slightly longer entry in his Ecclesiastical History (V.21). While Apollonius’ Apologia was apparently lost after the patristic age, an account of his martyrdom purporting to be original was discovered and published in the 19th century. It can be read below.

Apollonius is a patron saint, presumably, of apologetics. The Apologia recounted above shows his deep love for Christ, the Faith, and even for his opponents. His accusations against paganism would be echoed later in Augustine’s City of God, as are his more benevolent references to that greatest of pagan thinkers, Socrates. The exchange at the very end also shows his willingness to let go of the argument once his opponent becomes obstinate:


The magistrate said—“I thought that thou wast changed in the night from that mind of thine.”

Apollonius said—“And I expected that thy thoughts would be changed in the night and the eyes of thy spirit be opened by my answer: and that thy heart would bear fruit, and that thou wouldst worship God, the Creator of all, and unto Him continually offer thy prayers by means of compassion; for compassion shown to men by men is a bloodless sacrifice and holy unto God.” (43-44)

There is a wide gulf between the Christian defense of Apollonius and the bloodlessly logical approach to apologetics in today’s Anglosphere. The Randian “A is A” will convert no one but heartless pedants, and them only in the most shallow manner.

Email ThisBlogThis!Share to TwitterShare to FacebookShare to Pinterest
Labels: Apologetics