The Curious Case of the Double Papacy

(or, “The Great Majority of Papal Resignations are Null”)


Ever since Abp. Gänswein, the Pope Emeritus’ personal secretary, gave a speech last month in which he opined that Benedict XVI had abdicated the Petrine throne without abandoning the Petrine ministry, the rad trads of the Internet have more boldly begun suggesting that Francis is not a real pope at all. An out of context selection from Anne Catherine Emmerich’s prophetic visions was also quickly refurbished to prove the apocalyptic signal of a dual papacy. With every confounding utterance of Papa Bergoglio’s interview-facilitated magisterium, the Catholic on the street becomes more and more susceptible to such scandal.

But of course this conclusion is nonsense. Benedict clearly abdicated, and has repeatedly denied any extenuating pressure that would have invalidated his resignation from the papal throne. Certainly it is confusing to have “active” and “contemplative” participants in the Petrine ministry, but this becomes less confusing once one stops trying to interpret Ratzinger’s theology as if he were a scholastic or traditionalist theologian.

He is a liberal theologian, and always has been.

And as a liberal theologian, he freely uses words and concepts in paradoxical and sometimes contradictory ways. He is not so much of a liberal that he thinks that the papacy can be divided between two persons, and he is using terms like “Petrine ministry” in a non-technical way. Very much in the spirit of Hans Urs von Balthasar—who in The Anti-Roman Feeling split up the structure of the Church amidst the “Realsymbols” of the Petrine (pastoral), the Pauline (inculturation), the Jacobean (traditionalism), and the Johannine (love)—Papa Ratzinger sees truth as a multiplicity of perspectives that can complement one another. If Gänswein can be trusted to be accurately reporting Benedict’s thought, the Pope Emeritus has not remained grasping onto some part of his papal authority, but is incorporating another “Realsymbol” (perhaps the Johannine) under the umbrella of the Petrine ministry, which is greater than the person of the pope, who alone retains the “Realsymbol” of Peter. The Petrine ministry is thus presumably greater than the pontiff himself.

To complain that this is all a great deal of oddball nonsense is of course also accurate. Nobody has ever accused liberal theologians of simplicity, coherency, or even of adhering carefully to the principle of non-contradiction. In opposition to this half-hearted talk of the last few years, the actual announcement by P. Benedict was in fact quite unambiguous:


For this reason, and well aware of the seriousness of this act, with full freedom I declare that I renounce the ministry of Bishop of Rome, Successor of Saint Peter, entrusted to me by the Cardinals on 19 April 2005, in such a way, that as from 28 February 2013, at 20:00 hours, the See of Rome, the See of Saint Peter, will be vacant and a Conclave to elect the new Supreme Pontiff will have to be convoked by those whose competence it is.

That speech was so clear a Thomist could have written it. In a very real way it simply doesn’t matter how the P. Emeritus has tried to rationalize or justify his abdication and his decision to continue wearing the papal white since February 2013. His own words were clear and binding, and he is the Roman pontiff no longer. It is sad to see him descend intellectually further into his liberal past, but hardly surprising.

Thomas, an old friend of mine, once spent a few months convincing me to read Hermann Hesse’s Nobel-winning novel The Glass Bead Game. I avoided it for a while, having identified Hesse with the adolescent narcissism of Siddhartha and Beneath the Wheel, but was rather surprised to enjoy it once I started on it. The novel is long and a bit ponderous, but the main conceit it that it takes place in a future European utopia of contemplative learning. The university-state Castalia appropriates a neo-Buddhist style of meditation and applies it to Western classical education, the height of which is the Glass Bead Game: a contemplative aid wherein stylized glass beads represent aspects of the cultural traditions of philosophy, music, art, and science.

The plot, however, revolves around a certain Joseph Knecht, a student of Castalia who rises to become the Magister Ludi, their version of a papal figure. At the end of Das Glasperlenspiel, Knecht reveals his plan to abdicate the Magisterial role, having come to the conclusion that Castalia had long since become so insular and rarified that it now has nothing it can offer the world for its betterment. Knecht decides (possibly via the influence of a Benedictine monastery) to become a mere tutor of one young man, as a sign that he is returning to the work that Castalia was originally formed to do.

As such, Joseph Knecht retained the “ministry” of a magister while resigning as the head Magister. Thankfully for his former Castalian administrators, they did not have to justify the scandal of his resignation for long.

Upon the resignation of Joseph Ratzinger, Thomas and I had many lively discussions about the justifiability of this act, with many references to Hesse’s magnum opus. At times we wondered if Ratzinger might have read this novel, perhaps keeping Knecht’s climactic decision always in the back of his mind as a possible path of escape from an unwanted position of authority. It is well known that he asked John Paul II for permission to resign from the CDF more than once, and he took on the papal robes only with great reluctance.

The following words of Fr. Jacobus in The Glass Bead Game are close echoes to Ratzinger’s belief that a smaller, more spiritually intensified Church is in store for the future:


Times of terror and deepest misery may be in the offing. But if any happiness at all is to be extracted from that misery, it can be only a spiritual happiness, looking backward toward the conservation of the culture of earlier times, looking forward toward serene and stalwart defense of the things of the spirit in an age which otherwise might succumb wholly to material things. (363)

One can comfortably imagine Knecht and Ratzinger retiring together in a small house next to a German lake, waking up each morning to contemplate history and the spiritual life before the mist burns off the water. Joseph and Joseph both bend down to scratch Pushkin’s nape while the tea steeps. Sometimes, perhaps, they stop to consider the voids they left behind, and the lesser men chosen to fill them. 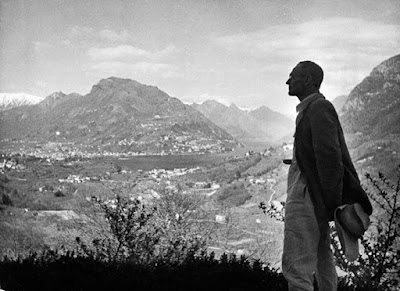 Email ThisBlogThis!Share to TwitterShare to FacebookShare to Pinterest
Labels: Bishop of Rome, resignation of Benedict XVI