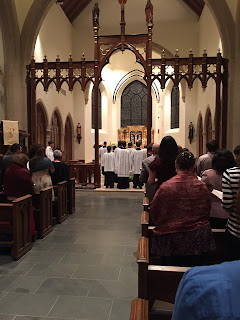 For the second year in a row I spent Christmas at Our Lady of Walsingham in Houston, once a church and now the small cathedral of the Ordinariate for those of Anglican patrimony in the United States. Msgr. Steven Lopes, formerly a priest who worked to establish the Ordinariate structure and now its bishop, pontificated solemn Mass and preached the sermon.

Like last year a prelude of traditional Christmas carols preceded the Mass with such hymns as O Holy Night, O Little Town of Bethlehem, and Once in Royal David's City. Before the procession the deacon sang the Proclamation of the Birth of Christ, which is still retained in some churches after the disgraceful abolition of Prime in 1964. O Come All Ye Faithful was the processional hymn. Despite the prominence of hymns the propers were sung in English to their corresponding Latin Gregorian melodies. In a change from prior Masses at Walsingham, the lessons themselves were sung according to the old chanted melodies, with the prophecy tone for the Isaiah reading and the epistle tone for St. Paul to Titus. The psalm was sung straight through without the mundane responsorial melodies that plague the Pauline Mass. Angels We Have Heard on High was sung as a sequence after the Alleluia, not exactly the Sarum tradition, but a beautiful hymn none the less. The bishop pontificated from his throne, but despite the presence of Fr. Hough, the rector and MC, the Tridentine ritual normally imitated in Ordinariate communities was not followed. 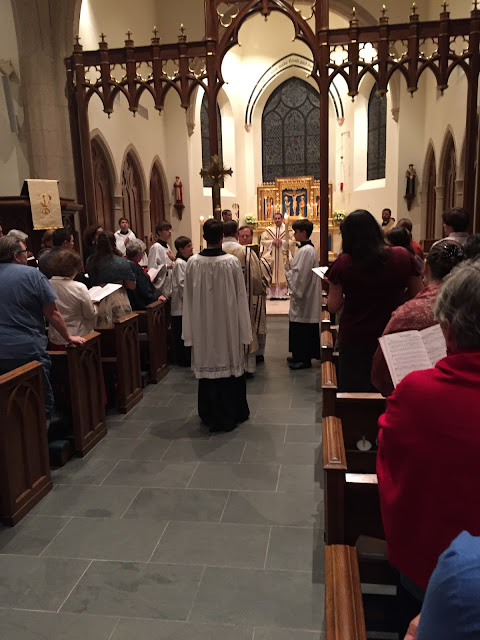 Bishop Lopes began his edifying sermon with the Saint Andrew's prayer from an old holy card and noted how very Catholic, how gritty and real the language used in it was. For Christians the temptation is not losing Christmas in commercialism, he said, but in losing it in the many "real meaning of Christmas" bromides of the secular world: Christmas is hope (for what?), it is peace (which is what?), and so on. The birth of Christ was not a glamorous event; it transpired in a farm barn in the cold of night and the only witnesses were oxen and people who follow sheep around for a living (the Wisemen came at some point in the next two years). The fact is that there is one way to immortality, that is through the Incarnate God, Jesus Christ. It was a real event with real consequences. And it happened in Bethlehem, in the piercing cold, at midnight.


As usual, the standard of music is excellent for a parish choir, as exemplified by this rendition of Wilcox's setting of the Sussex Carol at the offertory.

At Communion Victoria's setting of O Magnum Mysterium and Silent Night were sung by candlelight. The bishop recited the Last Gospel aloud after the pontifical blessing and Mass concluded with Joy to the World.

As usual Mass at Our Lady of Walsingham is both beautiful and visionary, reflecting both a mind for what inspires and for what elements of the Latin tradition that elevate the mind to God can be revived.
Posted by The Rad Trad at 12:04 AM

Email ThisBlogThis!Share to TwitterShare to FacebookShare to Pinterest
Labels: Christmas, ordinariate, Our Lady of Walsingham