Crossing the Threshold of Popery 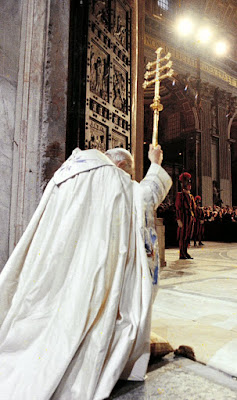 There is a little passage in the introduction to P. John Paul II’s 1994 interview Crossing the Threshold of Hope that started a long, internal process of reconsidering my approach to papal statements. The editor-interviewer Vittorio Messori drops this challenge to ultramontanist theologians while explaining the nature of the text to follow:

It is my duty to guarantee to the reader that the voice that resonates—in its humanity but also in its authority—is entirely that of the successor to Peter. It will now be the job of theologians and analysts of the papal teaching to face the problem of classifying a text that has no precedent and therefore poses new possibilities for the Church. (viii)

I listened to the entirely of Crossing the Threshold of Hope on an audiobook while driving from the American Midwest to New Mexico. My conversion was recent and still in its first vigor. While my reading pre-Confirmation had raised some confusion in regard to the thoughts and actions of the then-current Roman Pontiff, this book raised serious doubts. When I left the Missouri border I was a papist, but by the time I reached the deserted American Southwest I wondered if the pope was even Catholic, and if I should remain thus.

From John Paul’s limp passive voice to his failure to make clear distinctions, I grew increasingly frustrated with the pope’s muddled rhetoric. In the very first chapel he undermines the unique office of the papacy by extending the title of Vicarius Christi to the “entire college of bishops,” and also to all priests and to “each of the baptized” (13), without any clear distinction.

The formlessness of this personalist-philospher-pope’s thought became apparent in the occasional nonsense phrase that I desperately tried to make sensible, such as his description of the created world as “the foundation of a creative existence in the world” (21) or “the geography of the Pope’s prayer” (23). In response to the question of whether or not God exists, he refuses to answer clearly with a “Yes,” but rather recapitulates the history of the relevant philosophical speculation—“This question has reverberated throughout a highly developed Western civilization” (29), he says with all the squishiness of the indecisive.

Less than halfway through the book, John Paul “The Great” has begun rambling on about the greatness of the Church’s openness to the world. “Aggiornamento (updating) does not refer to the renewal of the Church; nor only to the unification of all Christians, ‘that the world may believe.’ It is also, and above all, God’s saving activity on behalf of the world” (76). Is the acceptance of the “updating” of the Church for the contemporary times necessary for salvation? It is God’s saving activity, after all. Can those who reject updatedness be saved?

Then he begins praising all the non-Christian religions of the world, claiming that, thanks to the Holy Spirit, there is “a kind of common soteriological root present in all religions” (81). What kind? Who knows. He does offer some caution regarding Buddhism, but again in the passive voice that precludes an actual warning or condemnation: “It is not inappropriate to caution those Christians who enthusiastically welcome certain ideas originating in the religious traditions of the Far East” (90). He says that Moslems “invoke the true God” (93), a common theme in the Age of Aggiornamento. His words on the validity of the Old Hebraic Covenant (in the chapter “Judaism?”) are vague, although Cdl. Ratzinger would be far more optimistic about its validity in his writings.

But it was the chapter “Is Only Rome Right?” that threw me for a loop as I sped down the Oklahoma turnpike:

Besides formal membership in the Church, the sphere of salvation can also include other forms of relation to the Church. Paul VI… spoke of the various circles of the dialogue of salvation…. It would be difficult to deny that this doctrine is extremely open. It cannot be accused of an ecclesiological exclusivism. (140-141)

The discussion of ecumenical overtures with Protestants that follows is concerned not with the salvation of those who are outside the Catholic communion, but with practical movements towards unity. “What unites us is much greater than what separates us,” he writes, just before going on about “genuine divisions” where the faith remains uncompromised (147).

The “Pope of Surprises” was not only confused but naive: “We find ourselves faced with a new reality. The world, tired of ideology, is opening itself to the truth” (164). Somehow in the midst of all this wishy-washy optimism, he finds himself surprised that preachers “no longer have the courage to preach the threat of hell. And perhaps even those who listen to them have stopped being afraid of hell” (183). Yet he ends the chapter with praise for Origen and von Balthasar’s rejection of eternal damnation, but without clear agreement or disagreement on his part. Is he the “Pope of Surprises” or the “Pope of Being Surprised”?

“Be not afraid,” is what he often repeated. Yet he gave me much reason to fear. I feared most of all that I had been scammed into conversion, that I had been lied to by the apologists who insisted that membership in the Church Catholic was necessary for salvation. I feared that they had either lied about what the Church was, or that this pope was speaking of some other religion entirely. I wondered if I ought to return to my Protestant roots, since they at least believed in the principle of non-contradiction.

But it was that brief passage in the book’s introduction, Mr. Messori’s observation that here would arise a “problem of classifying a text that has no precedent,” that helped me to cross my own threshold of hope. It is the ultramontanist who interprets every utterance of a Roman pope as infallible or potentially so; who when a pope calls a sunny day rainy, says that it must be “raining spiritually.” The legitimate exercise of Roman doctrinal clarity began to spill over into a thoughtless piety towards every casual utterance, to the extent that we still have well-meaning Catholics justifying the words of P. Francis in every interview.

The way over that threshold, I realized, was the simple rejection of Crossing the Threshold of Hope as a work of the Magisterium (that ever-elusive concept), and relegating it to the personal ramblings of a man who happened to be pope. It was a principle I eventually extended even to those officially papal writings that lacked doctrinal solemnity. John Paul’s papal documents are not quite as fast and loose with doctrine as this book-length interview, but they are frequently confusing and sometimes quite wrong. The first Vatican Council’s definition of papal infallibility was restrictive, leaving it to theologians and individual Catholics to sort out the importance of all other papal statements. Even P. Benedict XVI once said that the pope “is not an oracle; he is infallible in very rare situations.”

Words to live by. Be not afraid of discarding ultramontanism, all ye sedevacantists and neo-conservatives. When the pope of Rome speaks with all the solemnity and authority of the Holy Ghost, you will know it. Until then, unfollow @pontifex and give a mighty shrug whenever your non-Catholic acquaintances ask you to explain his most recent madness. Pray for him, but allow him to rant to an empty room.