Salt of the Earth 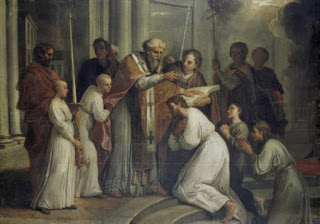 "As a boy, then, I had already heard of eternal life promised us through the humility of the Lord our God stooping to our pride; and even from the womb of my mother, who hoped greatly in Thee, I was sealed with the sign of the Cross and salted with His salt," wrote Saint Augustine in his Confessions.

Salt is the fix for flavorless food, although too much can ruin a good thing. More conventionally, it was a means of preserving meats, fruits, and a few other foods that could spoil before the concoction of refrigeration. Cardinal Newman, among others, wrote that growth was the only the only sign of life. Salt kept and improved what it touched; what it did not touch decayed and rotted.

So, like water which cleansed and satiated, or bread with nourishes, or wine which "gladdens the heart of man", salt was hallowed by Christ in Christian language. The Christian is the salt of the earth, which gives the earth its savor and which the Christian sins in hiding from others. Salt is Christian charity and goodness, purified by Baptism an enlightened by the Beatitudes.

By the time of Saint Augustine, salt had become a tool of blessing and exorcising those things ridden in darkness. The catechumens or the ailing un-baptized would be anointed with holy oil and signed with salt for the cleansing of their ailments and the expulsion of evil in the hope that those pagans would eventually enter the waters of Baptism. From his Confessions one might surmise that the Doctor from Hippo was salted at the behest of St. Monica after birth and, perhaps, once more during a near-fatal sickness. The aspiring rhetorician lived to be baptized properly and the Church is better for it, perhaps through the healing Christ granted in this uniquely Latin sacramental.

Only after consulting Fr. Capreolus did I discover salt has been exorcised from the deformed new rite of Baptism. Baptized a Methodist at age one, I was unaware of current Roman praxis. Eastern clergy often applaud vernacular in the new Roman liturgy, but retain qualms about the gutting of the Baptismal service.

In an era of innovation and fakery, when even a three Michelin star chef like Marco Pierre White urges us to use artificial substitutes in cooking, we ought not be surprised that the same has happened in our liturgy. Perhaps Paul VI should have revised the Sermon on the Mount to read, "You are the Knorr Beef Stock Cube of the earth."
Posted by The Rad Trad at 12:00 AM