St. Lawrence and the Antiquity of the Roman Canon

St. Lawrence and the Holy Graal

The great Saint Lawrence, Deacon and Martyr, whose glorious feast is kept today has, in addition to his many other distinctions, the added one of attesting indirectly to the great antiquity of the Roman Canon--one might say, the Apostolic origin of the Canon, at least in part.


As is well known, St. Lawrence, as archdeacon of the Holy Roman Church at the time of the Valerian persecution (ca. A.D. 258), was charged by the Holy Father, St. Xystus II, to disperse the treasures of the Church, to prevent them falling into the grasping hands of the Roman authorities. (Valerian's persecution, like others, was aimed at the higher clergy and ecclesiastical possessions, probably not so much to extinguish the possibility of celebrating Mass as out of good old, commonplace greed.) After St. Xystus, his other deacons, and subdeacons were put to death, St. Lawrence distributed in one form or other whatever he could to the poor faithful of Rome. Some things, however, were too precious to merely consign to "relief" efforts: above all, the chalice in possession of the Roman See and held to be passed down from the Prince of the Apostles himself.


The holy deacon managed to have the chalice spirited out of Rome to the provinces, namely his native Spain, where through many twists and turns it remained safe from the clutches of the faithless and no less grasping hands of the Vandals, Visigoths, Moors, and other such undesirables. Eventually, so it seems, it ended up in the possession of the bishops of Valencia, in southeast Spain. And, as our readers may know, there it is kept in the cathedral in its own chapel for the veneration of the faithful to this day: the chalice of the Last Supper, better known in English as the Holy Graal.
﻿

The Graal and the Roman Canon

The close connection between the diaconate and the service of the chalice is fairly common knowledge. A vestige of this connection remains in the traditional rite of Mass (even, when the rubrics are observed, in the Novus Ordo Missae) at the Offertory and in some of the ceremonies of Holy Thursday and Good Friday. St. Lawrence, therefore, would have had an intimate acquaintance with the chalice saved by his foresight and now located in Valencia. Further, he would have been close to the holy pontiff at the moment of consecration and heard him utter the somewhat curious phrase: "Accipiens et hunc praeclarum calicem" ("And taking up this most precious chalice"), etc.

There seems to be little reason why the Canon at use in Rome would go to such pains to indicate that the chalice is one and the same as that used at the Last Supper by Our Lord unless it was indeed believed to be just that. Consequently, there is every likelihood that such an inestimable relic would have been the object of special concern during the Valerian persecution, that it would have been under the care of Lawrence in particular, and that it would have been taken to a place where the Saint had relatives and friends in the Church, namely Spain.

And of course, if the Roman Canon preserved in its formula of consecration the identification of the papal chalice with that of the Last Supper, the conclusion seems unavoidable that such a unique tradition could only have descended from the Prince of the Apostles himself, including the ritual prayer (or at least that part of it) that became known as the Canon Romanus.

Naturally, over the passage of so many tumultuous centuries, a clear chain of literary or other evidence is lacking. A prosecutor might say that the case is circumstantial, at best. It is intriguing, though, to consider that after so many endeavors of Knights Errant and scholars alike to find the Holy Graal, clues to its true whereabouts may have been hidden in plain sight all along, whenever the Roman rite was celebrated and the mysterious words were uttered by the celebrant over that most precious chalice. 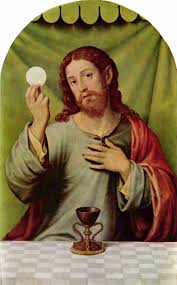 Considerably greater detail can be supplied to this entire historical surmise by consulting the very readable and interesting book by Janice Bennett: St. Laurence and the Holy Grail: The Story of the Holy Chalice of Valencia (Ignatius Press: 2004).

Posted by Capreolus at 2:17 PM