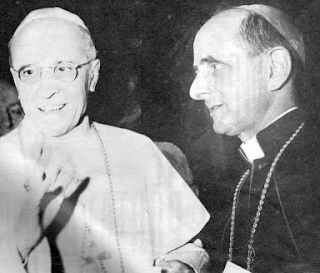 "It is also well-known that Giovanni Battista Montini was exiled from the Curia to the See of Milan by Pius XII, without being made a Cardinal, the first Archbishop of Milan not be made a Cardinal either upon appointment or shortly thereafter since 1893."

This remark, taken from the comments in a NLM post on Montini's desire for absolution without admission of liturgical guilt, repeats a common myth in traditionalist circles about the relationship between Papa Pacelli and Paulo VI. At face value it certainly follows the popular narrative that portrays Eugenio Pacelli as a charismatic, arch-conservative pope—and occasionally an organic reformer of the liturgy while defending against "antiquarian" archaeology; by contrast, Msgr. Montini is liberal, loose-thinking and given to the whims of the times, and held in suspicion by his employer. It follows that Pius XII, fearing the Secretariat of State's rising influence in the Vatican's liberal faction, exiled him to the industrial city of Milan to prevent him from being made his successor. After all, he deprived Montini of the red hat, did he not?

Some basic facts debunk the basic theory before the more particular circumstances can be judged. First, Pacelli sent Montini to Milan in 1954. The pope did not hold a consistory after 1952 due to his ailing health. Indeed, the conclave that elected John XXIII had fewer electors (53) than the one which selected his predecessor (62). John held several consistories in his short reign to amend this seeming disparity.

Moreover, Giovanni Battista Montini was never Vatican Secretariat of State. Pius appointed Cardinal Maglione as his Secretariat of State throughout the Second World War, after which the cardinal died and his duties were absorbed directly by the papacy until Papa Pacelli's death in 1958. Msgr. Montini acted as an assistant in fulfilling these duties, wherein he supposedly had furtive negotiations with Communists and incited the pope's ire and condemnation to exile. Does one exile a monsignor from an under-secretary role by making him an archbishop? Does one punish a priest by making him archbishop of the diocese that produced the prior pope? If Pius wanted to exile Montini he could have sent the university chaplain and left-wing agitator to any number of tiny village dioceses in Italy. One does not punish a minor bureaucrat by making him papabile.

At a closer view Pius XII and Paul VI were extraordinarily alike. Both came from influential families—Pius coming from "black nobility" which increased its wealth in banking and Paul coming from Giorgio Montini, a luminary in the Christian Democrats movement. Neither went to a seminary to do anything other than study Canon Law for a few years and fulfill a legal requirement; otherwise their clerical educations were undertaken by their cardinatial mentors (Rampolla and Pacelli respectively). Both worked in the Secretariat of State office, although Pacelli had more significant field work than Montini, who made one embassy to Poland before being recalled to Pius' side. Both displayed an optimistic willingness to cooperate with post-War political institutions erected by democratic powers; Pius XII was called the "chaplain to NATO" more than once while Paul VI told the United Nations that the edifice it built must never fall.

Above all, both embraced liturgical tinkering at an historically unprecedented level. Pius XII hired Annibale Bugnini after reading his reform-minded article in a liturgical journal and gave Bugnini carte blanche to restore Holy Week to a form that never existed, a reform less radical than Paul VI's only in that it ruined only one week of the year. Paul, after gathering university students around his altars and saying Mass in the streets of Rome with progressive students, re-hired Pius's fixer after John XXIII fired him and let him wreak havoc on the other 51 weeks of the year. Other than the scale of destruction, perhaps the only real difference between the two popes is that Paul VI showed severe regret and cognitive dissonance later in life.

What, then, do we make of the 1954 "exile" to Milan? There are several possibilities. Perhaps Pius grew tired of Montini's antics, like saying Mass surrounded by a crowd of teenagers, and wanted him to rethink his ways. Perhaps Pius knew he was getting too old to function and that giving his protege a papabile see would guarantee him the chance to become his eventual successor. Or maybe they butted heads and Pius needed space from his friend all the while remembering that Montini was his friend.

Sometimes becoming a bishop can be demotion. It may well have happened to Robert Barron, who now instead of forming priests in the mold of Cardinal George now gives the odd sermon at someone else's cathedral in Los Angeles. But then again Father Barron was not made an instant candidate for the papacy.
Posted by The Rad Trad at 10:30 PM