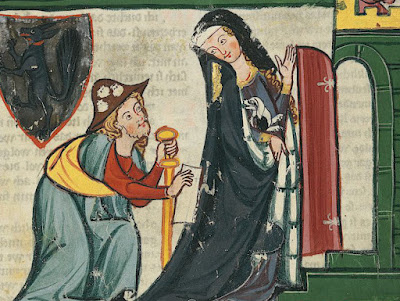 At the root of the pilgrimage is the desire to heal the breach between God and man. After the expulsion from Eden we are “here” and God is “there” and we must somehow find out way back into his presence. Man cannot make his own way unassisted back to the Divine, but because God has already made a pilgrimage to meet man, man can travel that same path to his creator.

Indeed, God’s pilgrimages to meet sinful man were numerous even before that Great Pilgrimage of the Incarnation, when the Word of God leapt down from his royal throne in Heaven to Earth. He came down to make a covenant with Abram, to wrestle with Israel, to speak to Moses face to face, to touch the lips of Isaias with a burning coal, and to speak to Ezechiel from his cherubic chariot.

The pilgrimages of man towards God are also of many types and examples. Abram left his father’s idolatry for a foreign land at God’s invitation. Joseph was his family’s savior when he brought them to Egypt. Moses led his nation to the borders of the promised land, a type of Heaven. Locations of ancient theophanies became pilgrimage sites to the Hebrews, since they were places God had graced with his presence. The annual pilgrimage to the Jerusalem Temple to celebrate the Passover symbolized man traveling to the mountain of God’s dwelling to beg his mercy.

The Christian era made no great modification to this religious instinct. The destinations for pilgrimages increased because devotion to the martyrs meant visiting their graves to beg their intercession, and the locations of the God-Man’s life and death were of great interest. God became a pilgrim among us, and man could model his own pilgrimage on the life of Christ (“because I go to the Father”). Churches were built all over the Holy Land and elsewhere to house the relics of martyrs. Rome was a site of pilgrimage first because it was where Sts. Peter and Paul were slain by Nero, not because it was the seat of the pope. One motivation for the Crusades was to make safe the way of pilgrims to the Holy Land. Throughout the Middle Ages shrines all over Europe were popular pilgrimage destinations. A properly-made pilgrimage could even reconcile sinners to the Church, according to some customs.

In our own day the practice of making a real pilgrimage is much rarer than it once was. The biographical account of Hilaire Belloc’s pilgrimage in The Path to Rome, complete with a solemn vow of intention, is charming to the modern reader for its archaism but is not taken very seriously as a form of devotional piety. The Camino de Santiago remains popular, but arguably more so for young adults “backpacking across Europe” than for the pious Catholic. Many ancient pilgrimage destinations have been transformed into tourist attractions and have lost the air of seriousness that attracts the true devotee.

The Stations of the Cross were formulated in order to make the experience of pilgrimage through the Via Dolorosa available to those unable to visit Jerusalem in person. As travel to the Holy Land became increasingly dangerous the Stations became more formalized and canonically regulated. As imperfect as many Stations-centered devotional booklets can be, the desire to imitate Christ’s own pilgrimage among us even unto his death remains central.

Many sites remain for those still inclined to make a true pilgrimage. Even North America hosts sites like Our Lady of Guadalupe in Mexico City and a variety of shrines in Canada and the United States. In spite of multiple rounds of iconoclasm since the Reformation, Europe is not lacking in destinations. I personally made a pilgrimage to Rome a year after my reception into the Church with the intention of assisting at Mass at St. Peter’s Basilica in thanksgiving for my conversion. The religious experience of Rome is still, as in Martin Luther’s day, a mixed bag of wondrous and debasing, but we will probably never be entirely free of simony and apathy.

In a day when travel is more effortless than it has ever been, pilgrimage may be a corrective not only for our troubled spirits but for our overtaxed, modernized minds. The broadway leads to destruction, but the slow and narrow path is the way to salvation.