The Uselessness of the Old Mass

In recent times one of the more overlooked philosophers was Josef Pieper, a German scholastic and advocate of classical and Thomistic thought. Pieper observed that one of the more lasting and pernicious assumptions Immanuel Kant gifted to our culture was the idea that philosophy must be purely rational and useful, that philosophy must follow a narrow approach in developing systems of thought that reflect how the world works in order to matter to the world. This is precisely why Aristotle could write so voluminously on many subjects without having an inherent system of ideas, only good ideas while the philosophers who followed Kant wrote only on a few subjects and interpreted those concepts as absolute reflections of how the world functions. Hegel had his dialectic, Nietzsche had his master-slave relationship, Marx had the exploitation of labor, and Michel Foucault readily stole anyone else's ideas.


Ancients called the linear, rational sort of purpose driven work artes serviles, arts that work toward a particular purpose and end. By contrast the artes liberales are free of such constraints, existing for their own purpose, freely available to all people, and of their own end. Philosophy and theology are liberal arts among academia, but music is also a liberal art and one more readily accessible to everyone everywhere.

Ratio is the means of servile labor, working under a set of controlled variables  toward an outcome. Only the arrangement thereof can be altered to arrive at the desired conclusion, like solving a system of equations. Since Newton, philosophers and historians have felt an inferiority complex to scientists who used the closed system of mathematics to describe natural phenomena.

Liberal arts are the realm of leisure, a different kind of work separate from the directional labor of servile work. Rather than ratio a better ancient word for describing leisure is intellectus, understanding. Intellectus is not "discursive", diving down to greater granularity. It is receptive and contemplative. Pieper equates this receptiveness to the Christian's acceptance of the gift of faith and Baptism by the Holy Spirit. God's justification of us flows from His love and not the difficulty of our work. The medieval Schoolmen considered reason (ratio) a uniquely human gift from God. Aquinas, in his Quaestiones disputatae de veritate considered understanding (intellectus) superhuman and divine: "non proprie humana sed superhumana."

"We are unleisurely in order to have leisure", said Aristotle. Religion, art, morality, music, prayer, and aesthetic enjoyment are all the spiritual and temporal expressions of leisure. Sunday, until quite recently in our history, seemed a unique day of the week. It was not a "day off" like Saturday nor was it a day of work. Instead it was a day devoted to the "superhuman", divinely given aspect of our persons. Is there anything more leisurely, "free", and—bluntly—useless than the old Mass in elevating mankind above the servile work of his routine and toward God? 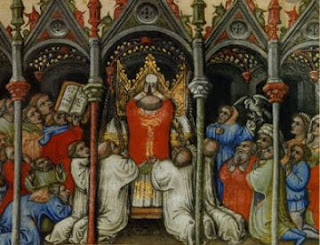 The old Mass, and the other ancient rites of the Church, never invite the faithful to reason about them. Much like their eventual divine Author, they are given, monumental, demanding of our ascent to them. The great acts of the Roman Mass dwarf anything man could or would concoct ex nihilo. No one in past times saw the Iudica me psalm, the offertory, the elevation, and then assumed there was some sort of holy system to be unlocked.

Quite to the contrary of our mainly rational and end-driven mode of thinking, the old Mass teaches by dramatic acts which reflect God Himself and our place before him. The choir angelically sings a mode of music which exists for no other purpose than liturgical service. The texts—particularly on the most ancient feasts, the feriae of penitential seasons, and the Dominical Masses—are congruous without resorting to the linkage of buzzwords. For example, the Mass of the Resurrection sung on Pascha chooses St. Paul's admonition to "purge out the old leaven that you may be a new dough", referring to the renewal of the Resurrection. The Gospel pericope is that of Saint Mark, who does not directly recount the rising from the dead in this passage since no one actually it. We must instead take the Resurrection on faith. Instead, the accounts of the risen Christ meeting the Apostles are read successively and patiently throughout the octave and Pascaltide, culminating in His Ascension into heaven. By this wisdom, the Church encounters the Resurrection as the Apostles and disciples of the Lord did.

This is not to say the old Mass lacks features of ratio for the mind which follows the liturgy more actively. The prayers of the clergy are in fact directed toward the moment when the priest reiterates the words of Christ and the bread and wine become the Body and Blood of the Lord. The Canon follows a chiastic pattern, beginning with the preface and a prayer of thanksgiving, the petitions of the Church and the living, the commemoration of the saints, the consecration, the petition the sacrifice be accepted, and recollection of the martyrs, prayers for the dead, and the final act of offering the consecrated gifts to the One Who gave them.

Even these rational and purpose driven parts of the Mass require some degree of leisure, that is, receptiveness and willingness to look beyond the pale of one's thoughts. The elevation of the Host at Mass is a moment of silence savored by leisurely Christians throughout the world. It is a moment when God simply is, a simplicity beyond our reason but not inaccessible to our understanding if we maintain the quiet of heart to hear.

Much has been written about the perceived faults of the Pauline Mass and Office. This blog is less interested in the subject than other writers, but we have spoken on the matter here. Apropos the matter of usefulness and reason, every part of the Novus Ordo conforms, to greater or lesser degree, to one exact purpose: someone on the Consilium study groups thought it was important. Every part of the Pauline Mass conforms to some degree to the scholarly assumptions in vogue in the early to mid-20th century: antiquarianism, arbitrary assignments of Apostolicity of liturgical elements, accessibility, abecedarian use of Scripture, anything post-dating a three-digit year was a corruption, and the like. It is no coincidence that every member of the group was a cleric without a substantial pastoral record. They were men with no understanding of the glorious uselessness of the old Mass to the eyes of the world, that the old Mass existed by God and for God, that it stood out, like Christ atop Mount Olivet, for the faithful's understanding rather than for their education.

In this last regard, the Pauline rite is something of a product of the materialistic age's mindset of "total labor", something latent in both Marx and capitalism. "Total" anything means the exclusion of whatever does not coincide with this fatalism, just as the Total War time between 1939 and 1945 precluded certain foods, vacations, and family gatherings even in the safest places. Total work and total reason precluded time and place for true leisure outside unless active attempts to cultivate it. This was not the fault of the liturgical reformers; in this regard they were nothing more than the product of their age.

While time passes and investors attempt to time the market, social media consultants drive outreach, or home buyers contemplate how to space their children, the Christian must step out of this world and into eternity taking to heart the words of the cherubikon: We who mystically represent the cheribum and sing the Thrice Holy Hymn to the Life Giving Trinity now lay aside all earthly cares, that we may receive the King of All, invisibly escorted by the angelic host.
Posted by The Rad Trad at 8:49 PM