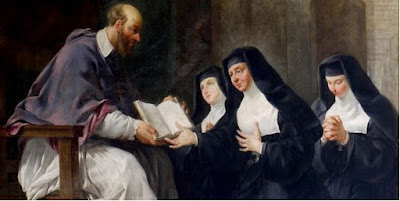 If you have ever prayed before an icon or a holy image you have engaged in imaginative prayer. Someone has created an image of a holy person or event and presented the image both for the grandeur of God and the efficacious devotion of the living. Indeed, even mental prayer is imaginative, it merely requires the person praying to construe the image rather than an artist or iconographer.

Imagination is the construction of images in our own heads, our ability to move them and join them abstractly using ideas we have accumulated in reality. In his chapter on the theme of memory in Confessions, Saint Augustine asks how he has a desire for God without having known God in the flesh and concludes that he had some awareness of God haunting him all his life in his head, an image formed but not yet fully realized.

Imaginative prayer should be just that, prayer focused on some image, visible or construed, concerning God, the saints, the events of Christ's earthly presence, and the Church. It is a vehicle for thanksgiving and petition as much as it is meditation and reflection. Perhaps two of the most historic and prevalent types of prayer that require imagination are the Rosary and lectio divina, the former a medieval development of the practice of repetitive prayer and the later something older than monasticism itself.

How is lectio divina an imaginative prayer? While the Rosary is more apparent in commanding meditation on fifteen certain mysteries of the Word, lectio allows one to enter a text as a form of prayer and commune with God therein. Without using the text as a form of imagination, to place one's self before God in humility and even to place one's self in the events described, reading becomes academic study and collecting knowledge, but not prayer.

In Mystical Mush one commentator asks if the Counter-Reformation emphasis on the "spiritual life" may reflect the augmentation of imaginative prayer in a way that the medieval Christians and the Eastern Churches do not know. This is possible, but it is territory that requires some caution. Some writers of that age absolutely prescribe what one might call imaginative prayer.

In the old kalendar today is the feast of Saint Francis de Sales, bishop of Geneva, spiritual master, and successful missionary for the re-conversion of cold hearted Calvinists to the warm of the Church's bossom. Saint Francis's Introduction to the Devout Life, or Philothea, is abundant with instructions to meditate on some spiritual truth, to place one's own self there, and to reflect on one's own standing with God and the need for conversion. In his early chapters he specifically calls to mind the Crucifixion and places the reader there at the foot of the Cross, then imagines the love of the just and the unsightliness of the damned. Which line will you pick, o reader, asks Saint Francis.

This may seem highly imaginative in departing from accepted norms, but is it really that different from the Kiss of Christ described by Saint Bernard of Clairvaux in his commentaries on the Canticle of Canticles?

Liturgical prayer itself requires some imagination, albeit less than most others. To see Christ truly crucified when the Cross is raised on Good Friday or truly betrayed during the responses of Tenebrae (Amici mei....) is to see the sacred rites as more than re-enactments or duties paid. The elevation at Mass was born out of a desire to see both an image of the Body of Christ and the thing itself. The same age which proliferated more [good] liturgy than any other was, in some way, more "imaginative" in perpetuating the presence of Christ than any other

Things become "mystical mush" when the imagination of the person praying is required to put words into God's mouth, as if a reply is the necessary and only point of interior prayer. No where in Philothea does Saint Francis ask for Christ's reply to a meditation, but plenty of mystics, spiritualists, and quietists have imagined such replies in their hearts or heads and then given them to us as matters of truth. At best, one can only hope for pious nonsense in these cases. At worst, one might reasonably fear voluminous novelties acquired on a two-ray radio with the Holy Spirit. Worst of all this approach puts someone's words in God's mouth and makes God into the fulfillment of one person's desires rather than all hearts' desire.

Prayer is imaginative and it should be as long as one does not begin to make it up.
Posted by The Rad Trad at 12:00 AM