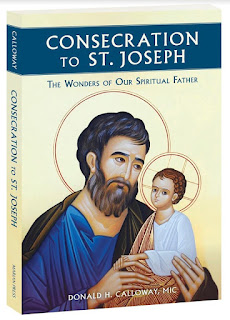 It has been only a few weeks since Marian Press published Fr. Donald Calloway’s Consecration to St. Joseph: The Wonders of Our Spiritual Father, and since the book seems to be gaining some traction I thought I should give it a read. I know almost nothing about Fr. Calloway save what he includes on the back cover—he is a vocation director for the Marian Fathers and lives in Steubenville—and a little bit from his social media footprint. I am not usually interested in reviewing new Josephite devotional material, but Calloway’s twist of a Montfort-esque consecration to the foster father of Christ piqued my interest.

Oddly, the focus on consecration is so strong that Calloway seems annoyed that any reader would want to take time and learn about St. Joseph before embarking on the 33-day preparation process:

They might, indeed! St. Louis de Montfort made sure to lay the theological groundwork for his “total consecration” to the Virgin Mary before encouraging his readers to embark on the lengthy preparation process. Fr. Calloway has a difficult time understanding why St. Joseph would require any introduction, much less why any Catholic would need convincing before preparing himself for a sacred vow to the carpenter of Nazareth.

Fr. Calloway’s version of St. Joseph is, of course, the “New St. Joseph” that I have written so much about in my Josephology series on this blog. Those posts expound (perhaps at excruciating length) upon the Josephite doctrines I consider untraditional and therefore in error, and Calloway adds very little to the doctrinal list.

I would rather consider a bizarre aspect of Josephite devotion which crystalized for me while reading this book: Why is it that devotees of St. Joseph strive to make him so much like the Virgin Mary, both in doctrine and spirituality? Let us consider this list that traditionally applied in whole only to Mary, but which the New Josephites claim as the common property of them both: 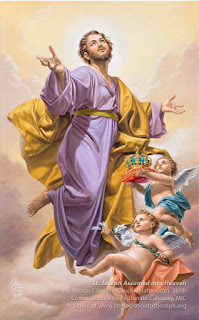 Why does New St. Joseph appear to be, for all intents and purposes, a male clone of Mary? Does he have no spirituality of his own? No doctrine or personality that could be considered particularly his? (I’m actually surprised no Rosary of St. Joseph exists. It would be the next logical step.) Calloway makes an attempt to push the idea of Joseph as “The Savior of the Savior” in reference to the Flight to Egypt, but other than this and a brief observation about manual labor, he comes up empty in demonstrating anything manly or even unique about St. Joseph. The historical trajectory of Josephite devotion is to mimic everything wonderful and special about the Mother of God, while gradually discarding those few facts concerning him we actually received from Tradition.

On the other hand, the Real St. Joseph is full of personality and is at no risk of losing himself as a dim reflection of the Virgin Mary. He is indeed virile, proven by the generous procreation of many sons who would become disciples of Christ. He is indeed manly, proven by the feeling of dishonor upon learning about Mary’s unexplained pregnancy. He is indeed both just and merciful, proven by the subtle decision to divorce her, but quietly. He is indeed wise, for he obeyed the angel always without complaint. He is indeed longsuffering, for he endured many trials, humiliations, anxieties, and undesired journeys for justice’s sake.


O how comely is judgment for a grey head, and for ancients to know counsel! O how comely is wisdom for the aged, and understanding and counsel to men of honour! Much experience is the crown of old men, and the fear of God is their glory. (Sirach 25)

Let the real glory of St. Joseph shine in all its radiance. We don’t need to carbon copy the Second Eve to make him seem worthwhile. Jesus is the sun, Mary is the moon; what glorious humility that they would bow down before Joseph of Nazareth! Perhaps he understands humility more than any other saint ever could. Let him remain humble.