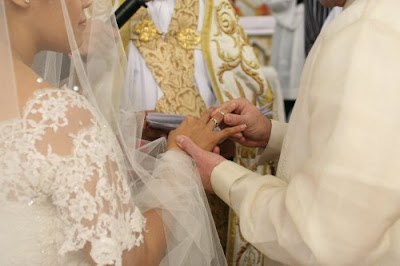 The prominence of pro-marriage protests in France and the revelation that a few persons I knew in high school were homosexuals—only on of the individuals surprised me—has led me to consider the issue of same-sex unions in a bit more depth.
Anyone looking for Catholic teaching on this matter can find it without problem. The Tridentine Catechism discusses marriage as a Sacrament. The new Catechism of the Catholic Church goes into greater depth on marriage. Numerous bishops have made statements affirming the Church's position. Biblical prohibitions against sodomy are arrant in their nature. The moral aspect here is not really in much doubt for Catholics.
But how does this work in a practical sense? That is, how does God's definition of marriage look when put into practice in the world? Numerous books, most recently Charles Murray's Coming Apart, have documented the decline of the family unit in the middle and lower classes of wealth and cognitive ability in the last five or six decades, with the upper-class remaining mostly unchanged. I find it amusing that the class which usually decides the cultural and political trends of the nature generally do not adopt these behaviors themselves, by that is beside the point. Let us think about marriage in practice.
Marriage, until the mid-twentieth century, was not primarily done out of love for the spouse. Marriage was, obviously, for the propagation of children. The spouses made a vow to love each other, which indicates that mutual love was not already a given. Marriage was expected to be a life-long effort, a joint-partnership is raising children. Women, aside from whatever education they received, learned how to judge and attract potential suitors and men were sure to have bright futures with well-paying jobs. The point was to say: reproduce with me!
The excess-wealth, at least in the United States, resulting from the post-War boom introduced a novelty to marriage: it was now primarily about the pre-existing love between the partners, which is, usually, expressed in feelings rather than demonstrated dedication. In the old way the vows at the altar were the dedication and love was supposed to follow.
The main reason why in the West the State became involved in marriage, a pre-existing social institution, was to champion the Christian religion by creating formal respects for the married in the form of tax and inheritance policies. A secondary reason, which became the primary reason when most nations secularized in the 19th and 20th centuries was to incentivize fecundity, to get people to keep providing a population at an increasing rate. The point of marriage in every culture in history has been to reproduce. Even polygamist societies, which would allow multiple wives but not husbands, emphasized children.
The problem with gay unions being put on par with marriage is that they are a further step in the West's protracted cultural and demographic suicide. We know a gay couple cannot reproduce by God-given means, but they could by artificial means: in vitro, sperm donation, and test tubes might be in the near-future for gays. How could this be a problem?
Think about it! Children learn how to function in their sex from the respective parent. Just as significantly, they learn how to pick a future spouse based on the traits they find in the respective parent by sex. A woman will look for a man based on what she saw in her father, whether she liked what she saw or not; she understands masculinity and how to approach it. A gay couple not only cannot provide the same care-dynamic as a straight family, but it cannot provide a model for a person of a particular sex either! The vast majority of gay men are highly effeminate, with some ready to wear mini-skirts. Among the lesbian population one can more easily find less ostentatious persons, but the "butch" woman is a reality. One should not learn femininity from a Brown alumna with a buzz cut, aviator sunglasses, a plaid shirt, and Birkenstock sandals. Not only would the child normally get a distorted view of the parents' sex, he or she would also only see half of the sexual population in an intimate, family setting. A child in a gay-male household would only be able to understand genuine femininity from a distance. This is emotionally and parentally cruel. Some may advocate a more "open" approach to parenting, but would that really be better? Divorce is already troublesome enough on children—increasing their own odds of divorcing in the future—without introducing more parental instability.

The political correctness that accompanies such radical social upheavals also influences the future of normal marriages. The Boys Scouts decided to begin to admit openly homosexual members. The Scouts, a setting where boys could socialize and learn traditionally masculine behavior, must open its door to—and eventually, cater its practices to—a minute and effeminate segment of the population. A place where boys could start to be men and practice the conventional values associated therein is now a setting for political correctness and experimentation. Virtues like honesty probably will not disappear immediately from the Scouts, but there will certainly be a decline.

We often hear from several sectors of the political world that we should be open to any social policy that does not directly hurt us. Drug legalization and same-sex unions are examples. Do gay unions hurt me? No, not physically or emotionally, but that does not mean they would not damage society on the whole. Gay unions would confirm that marriage is now just a formalization of mutual feelings of attraction rather than either a child-bearing venture or a permanent commitment. Enough marriages in the United States end in divorce (about 50%, and the rate increases in the middle and lower socioeconomic realms) that many couples do not marry, but just cohabitate. Cohabitation rarely produces children, unless the couple decides to have a child or their contraception fails. Cohabitation being neither a formal union nor a blessed one does not care the same stability as marriage and exposes the rare child born into such a relationship to a broken upbringing. Gay unions would further hurt the prestige and popularity of marriage-for-the-sake-of-children and further popularize cohabitation and a weak outlook on the part of those who marry anyway. Lost in all of this is children, who need a firm environment with a father and a mother in the household. Homosexual unions will lessen society's view of marriage as an endeavor worth one's time, which will impact the rearing of many children.

One last thing to consider is reproduction itself. Poorer demographics and immigrant demographics reproduce at a higher rate in the West than do those in the upper-range of socioeconomic status. Those in the middle and upper classes tend to have fewer children for many reasons: they enjoy their wealth and prefer a BMW 3-Series and a nice TV to another child; they do not need the physical labor and care that an extra family member provides; they have excess wealth, which can be spent on more effective means of contraception etc. My own country, the United States, reproduces at about 2.11 births per couple, which—when considering the infertile, those who never reproduce, and premature deaths—is on par with replacement rate, but is without growth. Immigrant and low-income groups are keeping that number where it is, which would be much lower if everyone followed the middle and upper-class lead. All I previously mentioned about the diminished attractiveness of marriage, the consequences for raising children, and the more casual and self-centered view people have of children comes into play here. Gay unions could indirectly have some small, but significant, influence on further lowering a country's fecundity in the ways I have enumerated above. Meanwhile, the poorer groups will continue to reproduce and shift the demographics of a given country. A larger poor and lower-middle class population will effect greater polarization along the lines of wealth and potentially contribute to political unrest. Gay unions can and will hurt society, even if I am not forced to wed a fellow. Note: I have nothing against poor, immigrant, and low-income; I am just trying to make a forceful point.

I wish our policy makers would stop pursuing such nonsense as this so they can congratulate themselves on how tolerant, broad-minded, and accepting they are, and instead consider the long-term damage their policies can and will create.

There. End of rant. God bless you all.