While the Angelic Doctor has only a little to say about the Virgin’s spouse, he does follow his teacher St. Albert Magnus in following the Hieronymic belief in St. Joseph’s constant virginity. This, mixed with some truly bizarre applications of other Thomistic principles, has fired the small but persistent group of Josephite devotees since the Middle Ages. 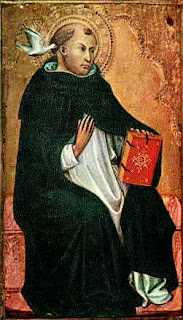 But what does Thomas actually write about Joseph? First, he agrees with St. Augustine that the union of Joseph and Mary was a true marriage, not a perpetual betrothal or a kind of legal fiction:


The marriage of the Virgin Mother of God and Joseph was absolutely true: because both consented to the nuptial bond, but not expressly to the bond of the flesh, save on the condition that it was pleasing to God. For this reason the angel calls Mary the wife of Joseph, saying to him: “Fear not to take unto thee Mary thy wife”: on which words Augustine says (De Nup. et Concup. i): “She is called his wife from the first promise of her espousals, whom he had not known nor ever was to know by carnal intercourse.” (ST III.29.2)

Secondly, he agrees with St. Jerome that there is no evidence to believe that Joseph was previously married and fathered children:


Some, as Jerome says on Matthew 12:49-50, “suppose that the brethren of the Lord were Joseph’s sons by another wife. But we understand the brethren of the Lord to be not sons of Joseph, but cousins of the Savior, the sons of Mary, His Mother's sister.” For “Scripture speaks of brethren in four senses; namely, those who are united by being of the same parents, of the same nation, of the same family, by common affection.” Wherefore the brethren of the Lord are so called, not by birth, as being born of the same mother; but by relationship, as being blood-relations of His. But Joseph, as Jerome says (Contra Helvid. ix), is rather to be believed to have remained a virgin, “since he is not said to have had another wife,” and “a holy man does not live otherwise than chastely.” (ST III.28.3)

Thirdly, when speaking of Mary’s vow of virginity, he touches on Joseph’s part in this action:


It was therefore fitting that her virginity should be consecrated to God by vow. Nevertheless because, while the Law was in force both men and women were bound to attend to the duty of begetting, since the worship of God was spread according to carnal origin, until Christ was born of that people; the Mother of God is not believed to have taken an absolute vow of virginity, before being espoused to Joseph, although she desired to do so, yet yielding her own will to God’s judgment. Afterwards, however, having taken a husband, according as the custom of the time required, together with him she took a vow of virginity. (ST III.28.4)

This is actually quite a modest claim when compared to later and even to some earlier sources. A few of the legendary works covered in earlier entries of this series claimed that Mary made a total vow of virginity long before her betrothal, but here Thomas suggests that she would have been willing to bear children through carnal means if God had so willed it, despite her wishes to the contrary! Thomas also says that the vow to abstain from carnal relations was made at the time of their marriage, not before.

Lastly, it is worth noting Thomas’ interpretation of Joseph’s decision to “put away” Mary when he had found her with child: “Joseph was minded to put away the Blessed Virgin not as suspected of fornication, but because in reverence for her sanctity, he feared to cohabit with her” (ST sup.62.3). This reading is a rejection of that in the Proto-Gospel of James, wherein Joseph decides to put her away as a compromise, because he is uncertain if she is lying about the divine paternity of her Son. Thomas simply says that Joseph was certain about her claims, apparently saying this in opposition to those who said that Joseph firmly believed she had committed fornication. The Proto-Gospel’s solution is a more nuanced one, but Thomas does not seem to even consider it. 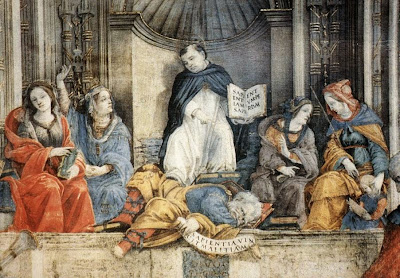 I had thought to write more on the development and distortion of Thomistic Josephology over the ages, but that will require more research before I can do it properly. Instead, next time I will take a step back from the specifically theological works to look at the change of Joseph in iconography and the supplanting of St. John the Baptist by St. Joseph in the popular Catholic mind.