So You’ve Started a Reformation: 7 Things to Know and Share 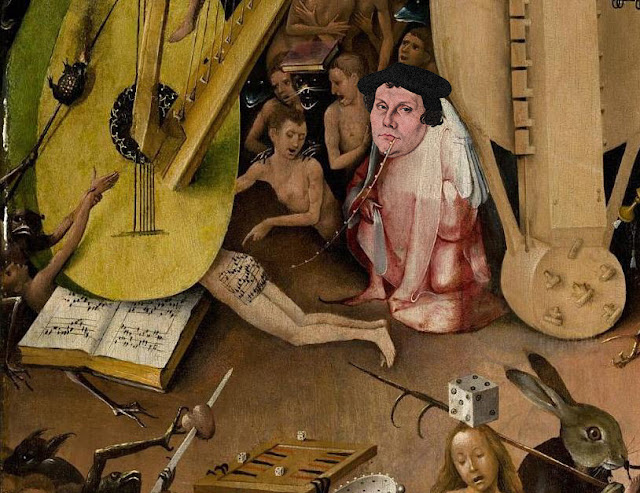 Sometimes while standing in the confessional line at the local Tradistani parish, I relieve the boredom of the twenty penitent-deep wait by reviewing some notes I’ve jotted down concerning moral theology. One old favorite is the list of the “Seven Deadly Sins and Their Daughters,” and most recently the list of Vainglory’s Daughters caught my eye. As transposed from Thomas of Aquino via P. Gregory I, they are:
My own faults are more commonly found among the Daughters of Sloth (which Gregory calls Melancholy), but I find it useful to periodically check the other six branches of viciousness to see which ones I might have unexpectedly fallen into. Reviewing the section on Vainglory led me to reminisce at length about Fr. Luther’s motivations for his reformational movement.

Considering the sins of others might be a poor use of one’s own examination of conscience, but I sometimes think that the examples of the morally ruinous can be as helpful to the penitent waiting his turn in line as the examples of sainted men of old. Anyone who has a basic biographical knowledge of Martin Luther can see his portrait painted in scathing detail with this list. The Daughters of Vainglory might as well have been his Muses.

There is a trace of these Daughters among the denizens of Tradistani communities, as well, no doubt including myself. Those who hate the old Latin Mass, or even just the flaky Johannine revision of the ’60s, are quick to accuse their Tradistani brethren of cavorting with Vainglory’s progeny (although Presumption of Novelties must surely be found among the lovers of the Pauline Novelty Mass, as well). It is easy to accuse others of sin, and supremely difficult to accuse oneself, but the accusations of others are not always wrong.

In a day when high-ranking Catholic bishops go far out of their way to praise a heretic, schismatic, and apostate, laymen begin to wonder if it is because these bishops find in this German ex-monk a companionable soul. Do they see something of themselves in him, and do they gravitate towards him and praise him because they also wish to be praised for their own similar vices? It is nearly impossible to judge with certainty, even if the gross scandal of their celebration morally demands a clear condemnation. Who will judge the judges? Quis custodiet ipsos custodes?

It also occurred to me, while meditating upon the sins of Fr. Luther, that his precipitating vice was not in desiring to manifest his own excellence, but in taking scandal upon witnessing the corruption of the Roman clergy. He took this scandal so deeply and personally that he justified his self-imposed role as the Remaker of Christendom. Vainglory was here a later outworking of Faint-Heartedness and Despair, which are themselves progenies of Sloth.

The way to Hell is broad and multitudinous; the way to Heaven is narrow and humble. One branch of the Deadly Sin tree can unexpectedly lead to another. The example of notorious sinners helps us to see how this is so.

“We are conquered if we try too conscientiously not to sin at all. So when the devil says to you: do not drink, answer him: I will drink, and right freely, just because you tell me not to.” —Martin Luther