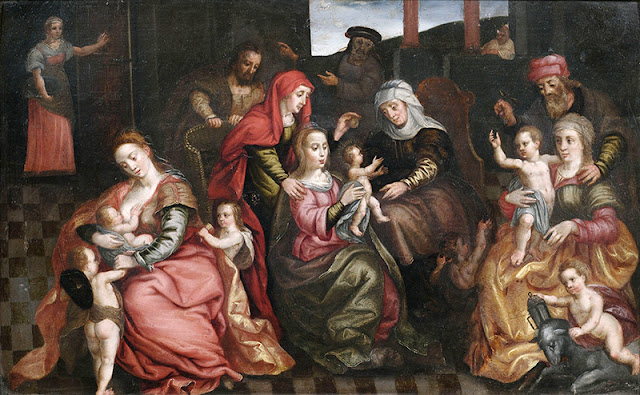 The bridal imagery of the Church is frequent in Scripture and Tradition, in the spiritual writings of the European monks and in the jeremiads of the Hebrew desert prophets. Other familial and societal images are used to describe the relationship between God and his people—father-son, master-slave, brother-brother, king-subject—but the marital bond has been fruitful for spiritual expositions, even if that imagery is not especially useful for everyone.

Being in the midst of marriage preparation, myself, I find it unfortunate that the priests involved in my fiancée’s and my spiritual formation in this regard find little use for the mystical symbolism that could provide a larger context for the sacrament of marriage. There is also little use for the advice of the Old Testament wisdom literature about the troubles of married life, and for the examples of saints and holy people who were not members of the Holy Family.

Fulton Sheen’s Three to Get Married is one of the recommended readings for the preparation course. Turgidly abstract and outdatedly anti-Freudian, Sheen’s complaints about the modern misuses of marriage could easily have been made in a short tract. The late bishop also makes an argument for the mystical aspect of the sacrament, but never in a way that allows the average reader to truly get a sense of what he means. He writes of spirituality, of the need for God, in the abstract, and when he talks about the heights and depths of Christian love he never really brings the reader along for the ride.

Doesn’t that just make you want to immediately sign up for Catholic Match? Thomas à Kempis wrote more passionately about the trials and loneliness of the monastic life! Must marriage be reduced to dusty neo-Aristotelian lecture notes? How much more lively are these brief passages of bridal imagery from the Holy Writ:


He hath set his tabernacle in the sun: and he, as a bridegroom coming out of his bride chamber, hath rejoiced as a giant to run the way. (Ps. 18)

With the robe of justice he hath covered me, as a bridegroom decked with a crown, and as a bride adorned with her jewels. (Is. 61)

Will a virgin forget her ornament, or a bride her stomacher? but my people hath forgotten me days without number. (Jer. 2)

With three things my spirit is pleased, which are approved before God and men: the concord of brethren, and the love of neighbours, and man and wife that agree well together. (Sir. 25)

And so forth. When you have read all of the above for many years, it is quite the disappointment to realize that the parish and diocesan preparation consists of little more than filling out personality tests and reading marriage-related encyclicals aloud. It is all very good to insist that the future groom and bride understand their moral and societal duties, but there is something perverse in ignoring the joyfulness of the occasion in favor of “moral manual”-level exposition.

Strangely enough, it is the post-conciliar theologians who have attempted to revive some sense of wonder and joy in the spirituality of marriage. Everything from John Paul’s “theology of the body” to EWTN radio marriage counseling makes an attempt to reinvigorate marriage with liveliness, joy, and even fun. Perhaps it is the abuses of this movement, like the recent Familiaris consortio, that cause Tradistani priests to react in the opposite direction. There is a fear that indulgence will lead to sin and various abuses; and of course it can and sometimes does. The Church Fathers and patristic-era monastics insisted on the superiority of the celibate life over the married because even sacramental marriage is rarely free from sinful excesses.

All human loves are meant to be reflections of divine love. As fallen, concupiscible beings, our loves inevitably fall short. A father’s love for his children ought to reflect God’s love for Christ and for his adopted sons, but doesn’t it often become petty? A mother’s love ought to reflect the Virgin’s solicitude for her disciples, but it easily becomes overbearingly codependent. Friendships ought to be like the help of Jesus, our perfect friend, but too often they disintegrate into squabbles and rifts. The love of a husband and wife should be like that of Christ and the Church Triumphant, but it is as susceptible to fragmentation as the other loves.

One cannot love fully what one does not understand, but understanding is not itself love. The intellect points the will towards the direction in which it should love. We know that a father should love his son, a husband his wife, a subject his king, a poet the flowers, a hunter the foxes, a pastor his flock, &c. This knowledge does not inevitably lead to love. The will, rather, moves the lover towards the beloved. And we learn to love, not by argument, but by example. The laity will love the Eucharistic Christ just as much as the priest. The son will love and respect his mother as much as his father does. The carpenter will love the warping and shaping of the wood as much as his mentor. Only the occasional and gracious inspiration of the angels will move us to higher loves than those we see in practice.

Who has wept to see his fatherland after being absent for many years? Who stares up at the stars in wonder, his mind expanding recklessly to contain the infinite depths of heaven? Who thrills at the destruction of the suitors at Odysseus’s hands as he finally reclaims his ancestral home? Who yearns for the return of the Bridegroom, his feet once again standing on the Mount of Olives? Who sees in his beloved the vineyards of Egypt, the pillar of aromatic smoke, the dove in the cleft of the rock?


And I heard as it were the voice of a great multitude, and as the voice of many waters, and as the voice of great thunders, saying, “Let us be glad and rejoice, and give glory to him; for the marriage of the Lamb is come, and his wife hath prepared herself. And it is granted to her that she should clothe herself with fine linen, glittering and white, for the fine linen are the justifications of saints.” And he said to me, “Write: ‘Blessed are they that are called to the marriage supper of the Lamb.’” (Apoc. 19)

Email ThisBlogThis!Share to TwitterShare to FacebookShare to Pinterest
Labels: marriage