The first major book of Marian spirituality I read as a Catholic was St. Louis-Marie Grignion de Montfort’s (d. 1716) True Devotion to Mary, a popular if hyperbolic work that set the stage of much Marian devotionalism to follow. Fr. de Montfort’s approach was to see Mary as a Lady in a sort of courtly or chivalric sense, as the mistress and commander of her loyal knights, who were to see themselves as her slaves:

Moreover, if, as I have said, the Blessed Virgin is the Queen and Sovereign of heaven and earth, does she not then have as many subjects and slaves as there are creatures? (I.2.1)

This is all fair enough, and fairly straightforward, even if the courtly language is far removed from our modern frame of reference. Mary is Queen much as Jesus is King, and it is the duty of all subjects to pledge their allegiance to their proper rulers.

Contrast this with the approach of St. Alphonsus Maria de’ Liguori (d. 1787) and his Glories of Mary, which heavily emphasized the role of Mary as the Christian’s spiritual mother rather than ruler. The title Mater Ecclesiae appeared only rarely before the 1700s, and it gained serious purchase in the twentieth century with the Vatican Council and recent popes. Bp. de’ Liguori’s language adjusts to his maternal focus:

O most tender Mary, most loving Mother! This is just what you desire. You want us to become children and call out to you in every danger. For you long to help and save us, as you have saved all your children who had recourse to you. (I.2) 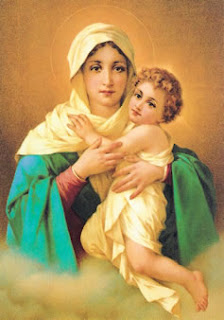 While the call to become like little children is of course derived from the dominican aphorism of Matthew’s Gospel, its application within Marian devotionalism is rather more sentimental than one expects was originally intended. Popular Marian spirituality has followed St. Alphonsus over St. Louis, and we may very well be the poorer for it.

Icons and statuary of Our Lady used to be more dignified than they have become. Early icons depicted her both with great humility and great nobility, whether she be holding the infant Christ on her lap or bowing before Christ Pantocrator. The humanizing elements of post-medieval painters increased her tenderness, but it was during the Counter Reformation and in the mass production of devotional figurines that Mary became more fully sentimental. Gone was the sturdy matron of patristic times, and here was the soft, doe-eyed young mother always offering a hug. The more exalted eastern iconography of Mary is alien to western Marian devotees, and it’s no mistake that the only oriental icon that has garnered popularity in the west is “Our Lady of Perpetual Help,” showing as it does Mary in a mildly comforting role.

Subjection to the Queen of Heaven need not be dripping with tender emotion. If that were required, how many people would find it impossible to bend the knee to the New Eve! Better, I think, to stir up feelings of awe and wonder at her holiness and exaltation. As the ancient akathist hymn sings:

It is truly meet to bless you, Theotokos, ever blessed and most pure, the Mother of our God. More honorable than the Cherubim, more glorious beyond compare than the Seraphim, without corruption you gave birth to God the Word. True Theotokos, we magnify you!