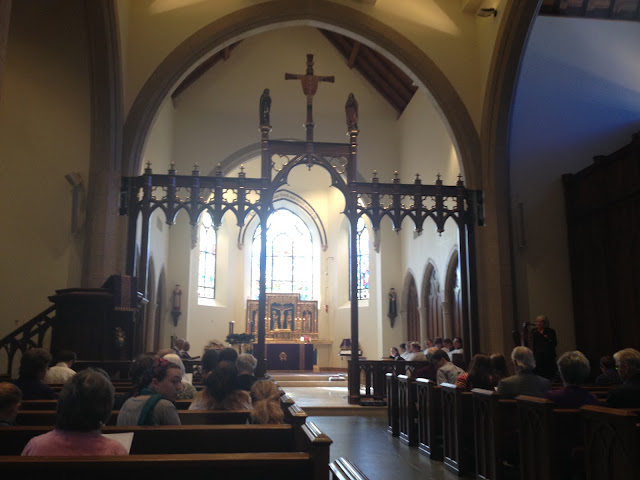 After first encountering Our Lady of Walsingham two years ago it has become my regular haunt when I visit family in Houston. I was pleasantly surprised when arriving for this morning's First Sunday of Advent Mass to hear choral Mattins underway, psalms, lessons, and all. It is the first time I have encountered a non-oriental church in Texas that has bothered with the Divine Office, much less on Sunday when most people just want their Mass and coffee.

I noticed one other difference, only after some discernment: some way, some how a rood screen had appeared in medio templi. I thought back and recalled accurately that there had not been one before, just a vestige of one above the altar rail, not unlike St. George's in Sudbury. According to the bulletin the rood screen was added and dedicated the prior week during the Mass for Paul VI's date of Christ the King. The cathedral rector, Fr. Charles Hough IV, writes:


"From the earliest times, Christian architecture has always given special prominence to the Altar as the focus of attention and nucleus, the beating heart of the faithful gathered before it to share in the Holy Sacrifice of the Mass and to feed on Jesus the Bread of Life. Indeed, the church building is essentially a canopy raised over the Altar with corresponding environs for those who attend on the holy mysteries. Reflecting the tripartite structure of the Hebrew Temple, the traditional parts of Christian churches delineate sacred space and mark a path of ascent toward the Altar. The nave represents the "Inner Court," while the chancel mirrors the "Holy Place," and all rises and points to the sanctuary figuring forth the 'Holy of Holies' and the very dwelling place of God with His people....

"After the Fourth Lateran Council in 1215 affirmed the teaching of transubstantiation and promoted the reservation of the Blessed Sacrament in tabernacles at the high Altar, even modest parish churches acquired beautifully carved chancel screens. These screens raised the vision of the faithful to the cross above with its image of our crucified Lord, flanked by the Blessed Virgin Mary and the beloved Apostle John. And these screens also directed the gaze forward, as through a doorframe or window, to the sight of the priest at the Altar elevating the Sacred Species at the moment of their consecration....

"In the sixteenth century, when the Reformation came to England, many of these screens were destroyed, though some survived. The roods and statues, however, were invariably removed and frequently replaced by images of the royal coat of arms, usurping the place of our suffering Lord with the painting of earthly power....

"Around the same time and certainly after the Council of Trent (1545-1563), rood screens began to disappear from Catholic churches in continental Europe for very different reasons. During the Counter-Reformation and under the influence of a baroque aesthetic, medieval styles gave way to neo-classical fashion. Newer churches modelled after the Jesuit church in Rome Il Gesú were built featuring open proscenium arches and lofty altarpieces for a more 'theatrical' staging of the miracle of the Eucharist as inspired, in part, by the nascent arts of the opera and secular drama.... But the real credit for the revival of fully appointed rood screens belongs to the brilliant English Catholic architect Augustus Welby Pugin (1812-1852). His influence was vast and spurred a return to medieval models in building both Anglican and Catholic churches amid the Victorian gothic revival."

Bishop Lopes, Fr. Hough, and the community of Our Lady of Walsingham are to be commended for their superb efforts. Let us hope a few other parishes follow their example.
Posted by The Rad Trad at 3:04 PM

Email ThisBlogThis!Share to TwitterShare to FacebookShare to Pinterest
Labels: Our Lady of Walsingham, pugin, rood screens