Ordo for the Ordinary Old Rite, Not the Extraordinary New Rite 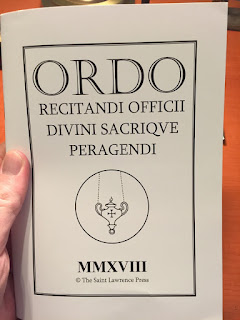 How is the 1962 liturgy different than what preceded it? For one, Pius XII “renewed” Holy Week by tossing it asunder and concocting something else. There are also fewer commemorations than the one to six one could feasibly observe on most days in the old rite. Is that it? A few less prayers and one week of the year a bit wonky? What if I were to tell you every day of the year is different in 1962 from what came before it. While some days, like the Sunday of Our Lord’s Resurrection, only vary minutely, large swatches of the year are quite different from the traditional Roman liturgy. 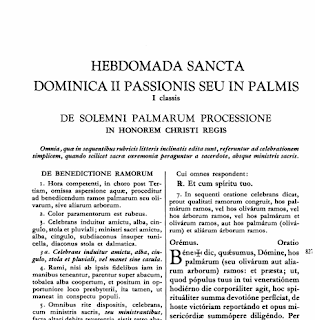 Enter exhibit A, the days preceding Palm Sunday during Passiontide. The most obvious difference is that the 1962 liturgy admits no such thing as Palm Sunday other than as an alternative name, curiously calling the day the “Second Sunday in Passion Time.” What about the days before the Second Sunday in Passion Time? Wednesday calls for Saint Benedict’s three nocturne Office and a Mass with a commemoration and proper Last Gospel of the feria. Friday anticipates the suffering of Christ in one week by contemplating the suffering of His Immaculate Mother now, again commemorating the feria. And Saturday is the feast of Saint Gabriel the Archangel. Both of these feasts would treat the season just like Saint Benedict’s feast, a full liturgy with proper and thorough commemoration of the season, so as not to omit it. 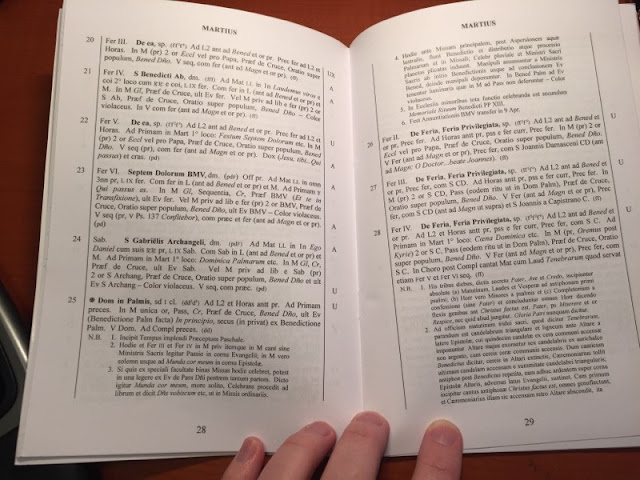 Why, surely the 1962 liturgy, which—unlike the big, bad “Novus Ordo”—has feasts of saints plentifully and commemorations, does this right? No. In fact it disregards most of it out of hand. You see, Carissime, the old rite does not permit saints to replace Sundays of penitential seasons, but it will permit them to replace weekdays under certain conditions. Perhaps saints ought not make such a splash during a time of fasting and prayers. Or perhaps Saint Benedict is not a minor saint, but the father of Western monasticism and the man whose legacy saved Europe for Christ’s sake. Perhaps the feast of the Seven Dolors of the Blessed Virgin is not a lollipop Marian devotion, but a preparation for the Passion of Christ and the antecedent to the surviving September feast, which is centuries newer. And perhaps Saint Gabriel is celebrated on the 24th of March because the following day is ordinarily the Annunciation, when God firmly entered into the fullness of time for our salvation by the fiat of the Virgin and the words of the same archangel. 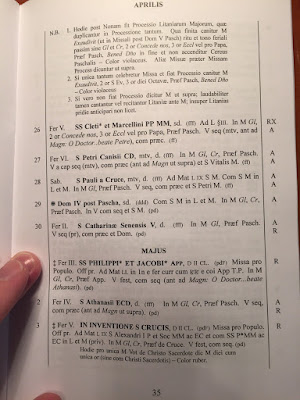 These differences, sometimes subtle and sometimes broad, are exactly why every traditionalist, cleric or lay liturgy-ophile, should be armed with the 2018 edition of the St. Lawrence Press Ordo Recitandi Officii Divini Sacrique Peragendi. This Ordo, unlike those of Ecclesia Dei, the British Latin Mass Society, the FSSPX, or FSSP, follows the liturgy as it existed before the gears of change that brought about the liturgical revolution began to churn. It is the last Office, Missal, Gradual, and Ritual that Montini, Pacelli, Braga, and Bugnini did not touch, and is consequently the last calendar that a saint from 1900 and 900 would recognize, especially during major liturgical seasons. Ought it be used to its full extent?—i.e. the use of the Roman liturgy prior to the “extraordinary form”? It is really not much of a moral dilemma. One should follow the tradition of the Church and her mens of worship, which, come to think of it, precluded committee fabrications until quite recently. There really is not much dilemma as to what one should do on May 1st, when one can either follow the 7th/8th century feast of Ss. Philip & James or celebrate the [rather dated] political outreach to communists called Joe the Worker, which includes texts about construction workers joyously listening to Pius XII talk in St. Peter’s square. 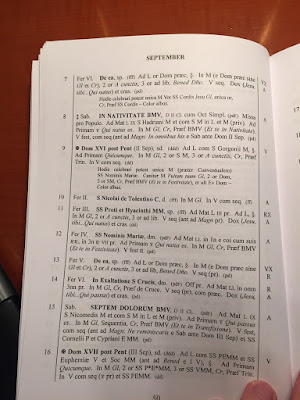 Not only is the St. Lawrence Press Ordo valuable to a full-on traditionalist parish, but also to those who are searching for enough bottle to take the final plunge; it is good for those getting a feel for tradition and looking to filter good practices, like commemorations or Monday Requiem Masses during Lent, into the current extraordinary form of the Pauline Mass, the 1962 Missal. One could, for instance, celebrate a votive Mass of the Holy Name of Mary on the Sunday after her September Nativity or that of St. Joachim on the Sunday after her Assumption. One can introduce the proper Last Gospel, as we recently had at the third Mass of Christmas day.

Lastly, the St. Lawrence Press Ordo is worth buying because of the increasing popularity of the old rites of Holy Week and the traditional rubrics (both ritual and textual) for Sunday Masses. Not only does the Ordo help with such work, but it made these modern efforts possible in the first place by preserving and promoting liturgical orthopraxis after Archbishop Marcel Lefebvre acquiesced to the Vatican’s 1983 request that he switch to 1962 precisely because it was published during Vatican II. Without preserving knowledge of the rubrics and keeping the old rite as a real, living tradition it is doubtful we would be seeing the resurgence of the genuine old rite that we do today. If anyone has doubts, look at the Holy Week pictures on New Liturgical Movement. I never thought I’d see a Presanctified Mass at Holy Innocents in New York, but I have. 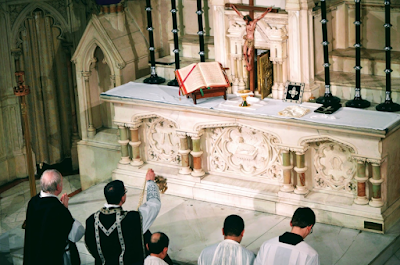