Tertullian on the Blessed Virgin 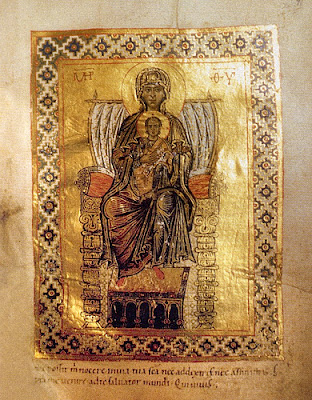 From On the Flesh of Christ, by Tertullian:

But, leaving Alexander with his syllogisms, which he so perversely applies in his discussions, as well as with the hymns of Valentinus, which, with consummate assurance, he interpolates as the production of some respectable author, let us confine our inquiry to a single point—Whether Christ received flesh from the virgin?—that we may thus arrive at a certain proof that His flesh was human, if He derived its substance from His mother's womb, although we are at once furnished with clear evidences of the human character of His flesh, from its name and description as that of a man, and from the nature of its constitution, and from the system of its sensations, and from its suffering of death.

Now, it will first be necessary to show what previous reason there was for the Son of God's being born of a virgin. He who was going to consecrate a new order of birth, must Himself be born after a novel fashion, concerning which Isaiah foretold how that the Lord Himself would give the sign. What, then, is the sign? "Behold a virgin shall conceive and bear a son." Accordingly, a virgin did conceive and bear "Emmanuel, God with us." This is the new nativity; a man is born in God. And in this man God was born, taking the flesh of an ancient race, without the help, however, of the ancient seed, in order that He might reform it with a new seed, that is, in a spiritual manner, and cleanse it by the removal of all its ancient stains.

But the whole of this new birth was prefigured, as was the case in all other instances, in ancient type, the Lord being born as man by a dispensation in which a virgin was the medium. The earth was still in a virgin state, reduced as yet by no human labour, with no seed as yet cast into its furrows, when, as we are told, "God made man out of it into a living soul." As, then, the first Adam is thus introduced to us, it is a just inference that the second Adam likewise, as the apostle has told us, was formed by God into a quickening spirit out of the ground—in other words, out of a flesh which was unstained as yet by any human generation. But that I may lose no opportunity of supporting my argument from the name of Adam, why is Christ called Adam by the apostle, unless it be that, as man, He was of that earthly origin? And even reason here maintains the same conclusion, because it was by just the contrary operation that God recovered His own image and likeness, of which He had been robbed by the devil.

For it was while Eve was yet a virgin, that the ensnaring word had crept into her ear which was to build the edifice of death. Into a virgin's soul, in like manner, must be introduced that Word of God which was to raise the fabric of life; so that what had been reduced to ruin by this sex, might by the selfsame sex be recovered to salvation. As Eve had believed the serpent, so Mary believed the angel. The delinquency which the one occasioned by believing, the other by believing effaced. But (it will be said) Eve did not at the devil's word conceive in her womb. Well, she at all events conceived; for the devil's word afterwards became as seed to her that she should conceive as an outcast, and bring forth in sorrow. Indeed she gave birth to a fratricidal devil; while Mary, on the contrary, bare one who was one day to secure salvation to Israel, His own brother after the flesh, and the murderer of Himself. God therefore sent down into the virgin's womb His Word, as the good Brother, who should blot out the memory of the evil brother. Hence it was necessary that Christ should come forth for the salvation of man, in that condition of flesh into which man had entered ever since his condemnation.