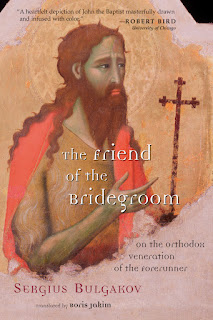 The last two weeks at the local Tradistani parish have been blessed with very good sermons about St. John the Forerunner, or John the Baptist. Last week’s Gospel reading about imprisoned John sending his disciples to the Lord and this week’s reading where John denies being the Christ both provided a great deal of substance for thoughtful sermonizing. I have written elsewhere about how diminished the cult of the Forerunner has become in the Latin Church, and I appreciate greatly those occasions when he is properly remembered.

Spiritual literature on the Forerunner is sparse, and I was pleased a few months back to come across a book by the 20th-century Russian Orthodox priest Sergius Bulgakov, The Friend of the Bridegroom: On the Orthodox Veneration of the Forerunner. While perusing the table of contents online I noticed an appendix on “St. John the Forerunner and St. Joseph the Betrothed” and bought it on the spot.

Like myself, Bulgakov takes the ancient icon of the Deësis as a starting point for understanding the early veneration of the Forerunner. However, his observation that John and the Virgin Mary are here paired iconographically is the starting point for some truly odd speculative theology. His emphasis on the importance of John’s mission becomes mildly troubling early on:


If not for John, Christ the Savior could not have come into the world. John and Christ are personally and indissolubly linked like the great and small celestial lights to which the Church hymn compares them. (“All creation is illuminated by solar rays, for, O Forerunner, you appeared like a radiant star of the spiritual sun.”)

Christ’s link to the Mother of God is clear and easy to understand; without Her the Nativity would not have taken place: the divine incarnation presupposes and implies divine motherhood. Less apparent but not less indissoluble is the link between Christ and the Forerunner, for the Lord’s Baptism, which corresponds to His spiritual birth and His reception of the Holy Spirit, presupposes the Baptist. And so, the place he occupies in relation to Christ is correlative to that of the Mother of God. (5)

The Russian’s errant understanding of Original Sin and of the total purity of the Mother of God hampers him in some respects, and I expected that to be the case. In order to place John so close to Mary, he must first demote the Blessed Virgin. Still, he continues with many good insights into the nature of John’s mission and with his importance to the turning from the Old Testament into the New. He makes much of John’s appellation as the “Friend” of the Bridegroom:


The Lord… did not find Himself alone in the world, for a friend, prepared and worthy to receive Him, had come to meet Him. In this meeting, this friend represented all humankind, or rather, the whole Old Testament Church, which, in his person, was coming to an end, surpassing its limited holiness. (11)

Bulgakov notices some intriguing parallels between John and Jesus in the Gospels that I had not seen before, such as the way the two are described as growing children: “And the child [John] grew, and was strengthened in spirit; and was in the deserts until the day of his manifestation to Israel” (Lk. 1:80), compared to “And the child [Jesus] grew, and waxed strong, full of wisdom; and the grace of God was in him” (Lk. 2:40). The baptism of John at the beginning of the Gospels is directly paralleled at their end when sacramental baptism is instituted by Christ. Both John and Jesus are named by an angel. He ends his chapter on the Birth of John with a wonderfully poetic description of the state of the world and the grandeur of Rome that could drive St. Augustine to literary jealousy:


And none of the people knew then that they were living at the same time as the “greatest born of women,” nor that precisely in their historical epoch a work of the purification of the sinful human essence was being accomplished that it is impossible for man to surpass. The world was intoxicated and deafened by its own grandeur. Tiberias reigned on the world’s throne. The hosts of Rome controlled the universe. Roman law held the universe in its iron grip. Horace was writing his odes, Tacitus his history, Vergil his Aeneid, and Seneca and Epictetus their philosophical works. Greece was surrendering itself to the sweet luxuriousness of its aesthetic and philosophical contemplation. The waves of the human ocean were rising and falling. Great political events, international wars, civil cataclysms were ripening and taking place. The world was living with all the intensity of the life of human genius and creativity, of sin and vice. But it did not know—no one in the world knew—that the fullness of human maturity had been fulfilled, that, in the Jordan desert, the greatest of those born of women was waiting for his hour to come. The ways of God are unfathomable for man. (40-41)

But this devotional work turns truly troubling in the chapter on the Baptism of the Lord. At the Jordan, Bulgakov says, Christ came not simply to begin his ministry with the public approbation of God the Father and the Holy Ghost, but to consciously and intentionally take on the role of the Son of God and to receive the Spirit.


Even as the Son receives from all eternity the Holy Spirit who proceeds from the Father and who, reciprocally, reveals the Son to the Father and the Father to the Son, so His human nature must receive the Spirit of filiation, in order that the Son of man truly become the Son of God…. In order to be the perfect God-Man, the Son must receive as Man that which He possesses as God. In order that the fullness of Divinity dwell in Him, it is necessary that the Son’s human nature too be adopted by the Father by the descent of the Holy Spirit upon it. (54-55)


[Christ’s] growth and development, now as an adolescent, are shown a second time in the Gospel: “Jesus increased in wisdom and stature, and in favour with God and man.” This indicates that His human nature was incomplete and imperfect in some sense, which would be impossible if the Holy Spirit, the fullness of Divinity, had hypostatically reposed upon this nature. This fulness was realized only in the baptism, when the Holy Spirit descended upon the Lord’s human nature in the form of a dove, and the Lord became the Anointed one, Christ…. The hypostatic descent of the Holy Spirit upon Christ’s human nature, His two natures being without confusion and without separation, took place at the baptism, when Jesus became the perfect God-Man…. The baptismal theophany is therefore a new and definite filiation. (56)

Here, Bulgakov’s crypto-Nestorianism becomes less cryptic. His Christology is so shaky that he believes Christ had to wait until his thirtieth year before he could make a “weighed decision to dedicate Himself to God” (58). He even admits that what he is writing sounds close to the heresy of Nestorius, but simply denies it without disproving it.

From here it was impossible to treat the author as anything but a hostile witness, and it was with some dismay to the reader that he proceeded to interpret John’s sending of his disciples to question Jesus as an experience of doubt, as his own Gethsemane temptation. In a later chapter on the Glorification of the Forerunner, he delves into even more heterodox territory with speculations about the so-called angelic nature of John. Most theologians interpret the description of John as the “angel” sent before Christ as a twofold metaphor—firstly in that he is the messenger (the literal meaning of angel) who foretells the Messiah, and secondly in that his ascetic life so mortified his flesh that it allowed him to live in spiritual purity like the angelic hosts. Bulgakov is not content to let it merely rest there:


The Forerunner is, as it were, a humanized angel or an angelic man, a living and personal communion of the two worlds. His nature represents a mystery that cannot be fully fathomed in this age. But it has been manifested and partially unveiled. Was this union of the angelic and human worlds accomplished at his birth, or is it a consequence of his heavenly glorification? There is no answer. But one can consider it established that the boundary between these two worlds was abolished at the moment of the Incarnation, and this abolition was one of the consequences of the Incarnation. These worlds were united in the person of the Forerunner, who thereby became not only a being who, as an angel, surpassed man, but also a being who, as a man, surpassed angelic being…. He is not only a man and not only an angel, but an angel-man. (131-132)

The book ends with an appendix on the devotional usurpation of John the Baptist by St. Joseph in the Roman Church. While this was perhaps the only section with which I entirely agreed, it is greatly ironic that this Russian priest complains so bitterly about the untraditional exaltation of Joseph while himself over-exalting John’s nature and mission, and dragging down not only the Virgin Mary but the God-Man himself! The Forerunner deserves a better consideration than this disappointing work. Perhaps someday one will be written.

Email ThisBlogThis!Share to TwitterShare to FacebookShare to Pinterest
Labels: St. John the Baptist