St. Joseph and the Thomists

Whilst perusing the local parochial bookstore one never knows what one might find amidst the piles of pre-owned volumes of forgotten preconciliar lore. Some will be seminary castoffs, some will be dust magnets with even dustier theology, and some will be a long-lost collection of Thomistic Josephology. 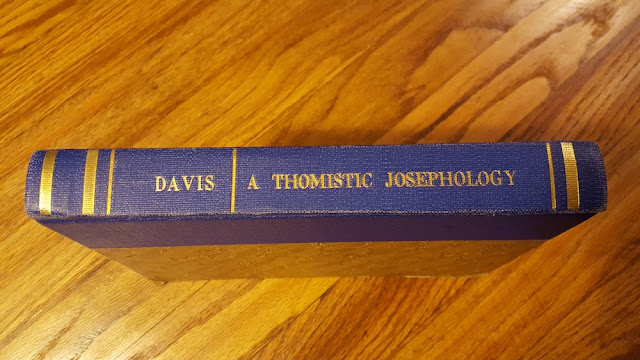 A Thomistic Josephology is a collected edition of articles written between 1961-1966 by James J. Davis, O.P. for the purpose of examining "the teachings of St. Thomas Aquinas on St. Joseph, the husband of the Blessed Virgin Mary and the foster father of Jesus Christ." I had never heard of this collection before finding it on an unassuming shelf, and even a search online comes up with scarcely any results.

Those who remember my old series on Josephology may recall a brief installment concerning the relevant doctrines of St. Thomas. What I treated summarily, Davis treats with over 300 pages of commentary and quotation, both in translation and out of it. Indeed, the bulk of the word count can be found in the Latin footnotes. 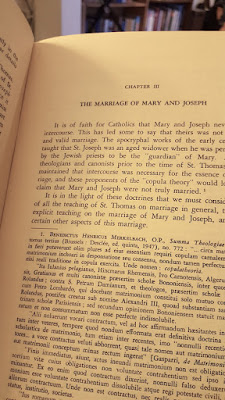 The first two-thirds of the collection very straightforwardly quote Thomas on his few Joseph-related passages and a many other vaguely related passages. These come not only from the two Summas, but also from the Catena and Thomas's scriptural commentaries. If there is one thing Davis is not it is lazy; his thoroughness could be considered pedantic, but in reality he has provided a helpful compendium of all that St. Thomas could possibly be argued to have written about St. Joseph. Davis establishes Thomas's arguments with their many dependencies on St. Jerome, particularly his doctrines of Joseph's vow of celibacy and of an actual marriage between Joseph and the Virgin Mary.

At around page 190 Davis descends into the odd realm of later Thomistic speculation. Suarez's "order of the hypostatic union" appears, as do many arguments according to fittingness. Davis actually does address the problem of Joseph supplanting the older belief in St. John the Baptist's preeminence, and admits that there is no simple solution to the problem. His section on the virtues and gifts of St. Joseph do not admit that he was in possession of every possible spiritual magnificence. He suggests there is much to doubt at the doctrine of Joseph's sanctification in the womb, and also at the idea of his resurrection and assumption. He traces the origin of some now-forgotten quotation attributed to Thomas about the great patronage of St. Joseph and proves it false. All things considered, this is a very reasonable work and not one to be easily dismissed like many devotional books. It would be better if those popular works were all replaced by this forgotten volume on the shelves of Josephite devotees.

Indeed, one wishes that Davis had applied his intellectual powers to a study of the Church Fathers and not restricted himself to Thomas's immediate influences and to the speculations of his followers. It is good to have a collection of Thomistic thought on St. Joseph, but Davis is too prone to accept Thomas's argument as a fait accompli rather than the thought of one Doctor among many, all working within an existing tradition. Many times Thomas is proof-texted in the way a Baptist might quote St. Paul. (In the prefatory material it is boasted that it "is obvious that the sole sources for this work are the writings of St. Thomas Aquinas," as if that were not indicative of a problem.)

This is a good reference volume for those who don't wish to rummage through their multi-volume set of the Summa Theologica for quotes, but it is not a useful survey of Church teaching and tradition on St. Joseph. Sadly, one comes away feeling that it could have been thus if the author had only been willing.