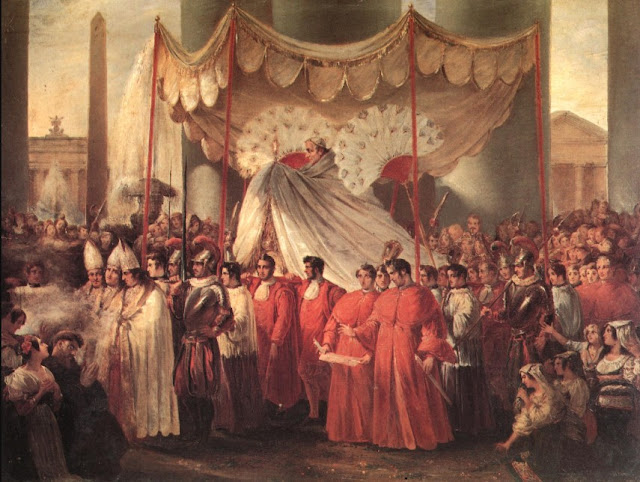 This blog has postulated some opinions on the papacy which look strange at first. For example, I have written that Pius XI and Leo XIII were the most recent popes who should be considered good, historically. Although opinion of John Paul II has improved in the last six years, those who lived through his pontificate will recall his enculturated Masses with great regret. Pius XII's hidden legacy has also been well publicized here. John XXIII, wrote Henry Sire, reflected a fatherly, familiar, Roman style of papal governance more recognizable in Leo and Papa Ratti, firm but un-aggressive, orthodox and with a mind toward preserving the entirety of the faith.

One might say than Pius XI was the last pope who was both unapologetically orthodox and un-ideological. Pius XII caught the fever of post-War optimism, as did John and Paul. John Paul II was a phenomenologist in philosophy and a Mariologist in prayer. Benedict XVI, for all his virtues, thought like a German academic and governed the Church much like one would run a seminar. Francis's ideology is anti-ideology, a proactive lack of structure which throws off the perceived shackles of Western traditions and leaves a more authentic experience of whatever the hell. If any pre-War popes between Gregory the Great, the first pastoral theologian, and Pius XII had ideological theologies, it was unapparent in their decisions and style of governance, which was always guarded, conservative, and sparse in reasoning—so as not to set new precedents.

If Leo and Pius were the last fatherly, un-ideological popes, Gregory XVI was the last pope of many other things.

For one, he was the last pope not to have been a bishop at the time of his election. Bartolomeo Alberto Cappellari forewent his noble roots and took to a Camaldolese monastery dedicated to Saint Michael off of the Grand Canal in Venice. Educated in science, Bartolomeo taught philosophy in universities and was elected abbot of his tiny monastery. After penning a panegyric praising the Church's resistance to novelty, Bartolomeo was twice offered bishoprics, which he declined. He did, however, accept the abbacy of his order's Roman monastery and was made Cardinal-Priest of S. Callixtus.

Although politically inexperienced, he nurtured interest in Armenian culture and issued an unambiguous condemnation of the Western slave trade which led him to say that his pontificate was only respected in the Papal States and the United States.

Liturgically, he did nothing notable at all, for which he deserves our praise. Pius IX did nothing, aside from issuing new texts for December 8, but Vatican I did consider a multi-year lectionary before tabling the idea. Leo XIII suppressed the transference of semi-Duplex feasts and provided a number of Duplex votive Offices for both Lent and per annum seasons to replace the remaining ferial days. The liturgical exploits of the 20th century popes need no recounting to our readers.

While some of Pope Gregory's remarks seem incendiary to us—referring to trains at chemin d'enfer and infernale—he was both the last pope to govern Rome for the entirety of his pontificate and to be an anonymous pope, the sort of pope one would feel very comfortable having lived and died without needing to know who reigned on Peter's throne. While Gregory's successors each had their own charisms and legacy, Gregory has very little outside of those the minds of those who study such matters and that's alright, at least, alright by me.
Posted by The Rad Trad at 10:24 PM