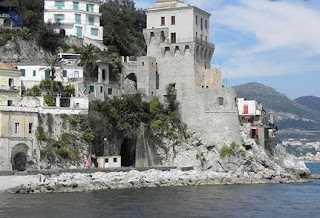 Disrobing. Stepping into the steam bath. Immersing one's self in the warmth of a gentle waterfall, every pore opening. Boom! The ground rattles! The soap dish crashes! The big one has come, but does one hide in delicacy or save one's self in the nude?

A friend, wearing nothing but a haunted face, jumped out of his morning shower amidst the assumption that the "big one" had finally arrived that Campi Flegrei had blown. The hills were covered in smoke and the ground continued to tremble, if only somewhat perceptibly. An amused old lady over the hill spotted him and roared in laughter. "Terremoto?" he yelled to her. "No! Santi Cosma e Damiano!" she retorted.

This Texan had taken a vacation to the Amalfi coast, eager to soak up some rays and Limoncello, and found himself in the middle of one of the last places to honor Saints Cosmas and Damian with a grand medieval feast. Up and down the Amalfi coast they blast canon fire on the feast of Ss. Cosmas and Damian, but is that day today (Sep 26) or tomorrow (27)?

Prior to 1970, the Latin Church honored the saints on September 27. The Rad Trad is unaware of any special significance to the feast date itself, whether any legends of the Saints or historical transference of relics fell on this date. The Mattins of the feast is silent and the Roman Martyrology does not seem to place any more weight on this date than it does on September 3 to Moses's death. For at least 14 centuries the feast took place on the 27; the Gelasian Sacramentary has orations for their feast, different to the Tridentine form, on "V Kal Octobres", which aligns with the pre-1970 date.

Why bother such an ancient feast? Precisely because it could be bothered. Today it has been moved a day prior to make room for the feast of Saint Vincent de Paul, who when the Pauline Mass was crafted was the patron saint of several guilds and charities which performed corporal works of mercy and beneficence at the parish level. In the United States at least the Saint Vincent de Paul Society still exists, albeit without the omnipresence in each parish it once possessed. Eliminating the saints entirely from the kalendar would contravene the antiquarianism of the reformers, but they could have been retained as a Solemnity/First Class Feast/Double of the First Class in specific regions and removed from the General Roman Kalendar.

A similar case of rationalistic tinkeritis befell the reformers when they touched August. Saint Dominic died on the feast of Transfiguration during an age when the veneration of saints was a serious affair. The day before his death (Our Lady of Snows) and the days after his death were occupied by very ancient feasts as were the days before (S Peter in Chains, Pope S Stephen, the Finding of S Stephen the Proto Martyr). Only August 4 was available for a feast when Dominic was canonized. Several centuries later, Saint Jean Marie Vianney died on August 4. A century after that, a committee of Italians occasionally meeting in a trattoria decided to move Saint Jean Vianney to the day he died and transfer Dominic to August 8. If S Dominic could not be observed on the day of his heavenly birth, surely at least the Cure d'Ars could be celebrated properly. No one considered that the Cure d'Ars celebrated S Dominic on August 4 every year of his life.

But most importantly, will a naked tourist in Amalfi be running out onto his balcony in a cloud of cannon fire and smoke today or tomorrow?
Posted by The Rad Trad at 12:00 AM