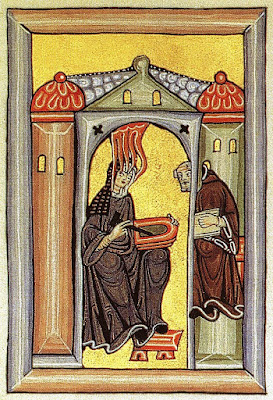 The problems of epistemology are never so deep as when one is arguing with a fellow Catholic about his favorite devotion or pet doctrinal theory. In such moments one enters the bleak cloud of unknowing, its murky haze made all the more opaque by your opponent’s statements of certainty and your own opposing certainty of his ignorance. By faith we have an actual certainty of those doctrines revealed by God through Christ and the Apostles, that public revelation which is preserved, curated, and crystalized by the Church throughout this age. Those with itching feet who wish to roam beyond the clear-lit space of orthodoxy without first fully understanding what has been illuminated often resort to mystical visions and so-called private revelations to defend their doctrinal theories.

Far be it from me to speak ill of Catholic mysticism. It is a particular ladder that some may climb to seek union with God ever more closely in this life, but there is no doubt that this state of life can have its perilous excesses. Visions and ecstasies are common enough, but their origins or sources of inspiration are not always clear. Often a mystic will form visions from a combination of theology, sacred history (traditional or popular), and his own imagination; there is not necessarily any divine intervention involved. Many spiritual teachers have recommended against seeking visions or any sensible consolations if one desires perfection, and the greatest mystics are doubtless those who never received a single vision in this life.

Nonetheless, Catholic history is dense with mystical visionaries of wildly varying legitimacy. Dante’s poetic masterwork is framed as a vision-tour of the afterlife, which was a popular form of moral instruction in the high Middle Ages; monks would sometimes speak of the great grace granted to them to see the terrors of Hell and Purgatory so that they might thereby avoid such punishments themselves. In England, Margery Kempe was a married woman who bullied her husband into a celibate marriage and wrote about her many visions and dialogues with Christ in between her heresy trials. Anne Catherine Emmerich on the other hand was a proper nun but had her visions recorded by a novelist and collector of fairy tales. Even the book of St. John’s Apocalypse was considered ambiguously canonical for centuries because of its bizarre content and debated authorship.

If the accounts of visionaries are not to be considered as divine revelations demanding assent by the rest of the faithful, but also not to be considered outright as false when approved by ecclesiastical authorities, they must necessarily fall into an odd middle-place in the body of spiritual writings. They may be read for edification by the faithful much in the way that the visions were intended originally for the edification of the visionary, but they may never be treated as sources of doctrine. Rather, they are judged by the standard of doctrine already given to the Church.

John of the Cross observes that “despite the many occasions on which Saint Paul preached the Gospel, which he said that he had heard, not of men, but of God, he could not be satisfied until he had gone to consult with Saint Peter and the Apostles, saying: Ne forte in vacuum currerem, aut cucurrissem” (Ascent of Mt. Carmel II.xxii.12). If even the Apostle Paul, who had been brought up to the third heaven and seen secrets not shown to other men, should be concerned about leaning too heavily on his own private revelation, how much more ought the rest of us to fear straying from the solid ground of public revelation!