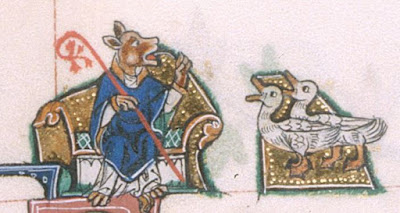 A few years ago I wrote a short piece about the comparison of disobedience to idolatry and divination in the context where lay parishioners were chaffing at the authoritative imposition of a strict dress code. While the sermon linked in that post has since been taken offline, I did think it worthwhile to transcribe a bit of it for posterity:

To consciously and willingly disobey legitimate commands from legitimate authority cannot be without some sin. I promise, when you’re toasting away your time in Purgatory or worse for deliberate disobedience, for stealing from God what is rightfully his, you’ll have nothing but regret and remorse for how good you decided to look that day back when you were so young and beautiful.

The thin line between legitimate authority and its abuse is impossible for most laymen to discern. One cannot remain a Catholic in good standing while rejecting the right of the Church’s bishops and priests to stand, in some fashion and form, in the place of God. Dominic Prümmer, O.P. makes distinctions between servile and proper obedience in his popular moral theology handbook, and says that obedience to men is limited “by the limited competency of superiors” (sec. 459; likewise St. Thomas: “a subject is not bound to obey his superior if the latter command him to do something wherein he is not subject to him” (ST II-II.104.5)), but few moral theologians have ever bothered to explore the precise limitations of the parish pastor or of the confessor. St. Alphonsus Liguori makes the authority of the confessor near-limitless:

Obedience to a confessor is the most acceptable offering which we can make to God, and the most secure way of doing the divine will. Blessed Henry Suson says that God does not demand an account of what we do through obedience. Obey, says the Apostle, your spiritual fathers; and fear not anything which you do through obedience; for they, and not you, shall have to render an account of your conduct. (Sermon XXV)

To be sure, Alphonsus adjures his audience to obey “in everything which is not manifestly sinful,” but for the scrupulous or ignorant penitent it is not a simple matter to discern what is manifestly sinful. Indeed, sexual predators within the priesthood can easily identify those with tender consciences as potential victims. Under the pretense of a holy submission of the will, they manipulate the penitent into participating in perverse sins and utterly devastate their ability to discern good from evil. Consider this slightly abbreviated extract from a recent testimony against Jean Vanier and a related priest:

Each time, I was frozen, I was unable to distinguish what was right and what was wrong. He told me that this was part of the accompaniment. He said, “This is not us, this is Mary and Jesus. You are chosen, you are special, this is secret.” I decided to go and see Father Thomas to seek his advice. He told me to come and see him. There was a curtain, and he sat on the bed. He was not tender like Jean Vanier. Same words to say that I am special and all this is about Jesus and Mary.

When King Saul refused to slay the best of the flocks of Amalec it was not due to a scruple about utterly destroying the sinners and their goods (as one might find in a modern biblical commentator), but because he found them beautiful and wished to dispense them according to his own will. He understood the will of God and chose to do otherwise. That is why St. Samuel likened his disobedience to idolatry and divination, for it was a way of seeking his own will apart from the will of the God of Jacob, while attempting to soothe his conscience with the promise of a future sacrifice.

I have known good lay Catholics who were threatened with canonical censures for demanding the pastor baptize their new child when it had the misfortune of being born in Lent. Two years ago an American bishop made noises about imposing canonical penalties against any Catholic who supported President Trump’s immigration policies. In earlier ages of the Church it was common for popes to place entire nations under interdict for the sins or inconvenient political moves of kings, thus depriving uncounted innocents of sacramental grace.

There are reasons why medieval artists thought bishops to be fine subjects of satirical attack. It is a pity the Counter-Reformation ruined all that fun.

But this is Lent, and we are supposed to use this time to make our wills more submissive, not less. The counsel of voluntary obedience is a north star for the soul embarking into the deep, and it may be a fruitful topic of meditation in these times when obedience is used as a club for bullies or as a snare by seducers. It many ways it is easier to be submissive to the moral law considered abstractly than it is to be submissive to our pastors, confessors, and bishops. Perhaps there is something to be gained in obeying where it is not strictly necessary, some kind of moral clarity to be found by going above and beyond the mere rules and perhaps by finally seeing the invisible order of virtue and goodness intended when we were created in God’s image… but I cannot deny that it is hard to move past the variety of abuse and find what is great about obedience.

Obey those who have charge of you, and yield to their will; they are keeping unwearied watch over your souls, because they know they will have an account to give. Make it a grateful task for them: it is your own loss if they find it a laborious effort. (Heb. 13)