The Parisian Missal I: Ordinary of Mass & Prefaces

As part of our endeavor to "test" Dom Prosper Gueranger's thesis that the liturgical books of France, particularly the "neo-Gallican" books like those used in Paris, were rife with Jansenism, we shall examine the Parisian rite Missal and the Lyonese rite Missal in depth, parsing the rubrics, Ordo Missae, prefaces, Holy Week rites, votive orations, and 10 random Masses (5 will be from Sunday). The series commences with the Parisian Missal. Our source is the 1766 Missale Parisiense found here. Given that it was in use a century before Gueranger's influence and a century after the death of Cornelius Jansen, any un-purified Jansenist detriti should be visible.

For the sake of simplicity we shall say the Cornelius Jansen was bishop and theologian in the 17th century who held ideas on free will and grace which he believed reflected those of St. Augustine. His views, which minimized free will and man's relationship to grace to a near-Calvinistic level, inevitably brought his followers into an exclusivistic, communitarian mindset, one which often sought to minimize Papal authority. From New Advent's encyclopedia, here are the precepts of Jansen condemned by Innocent X's bull Cum occasione in 1653:
We shall use these condemned statements as criteria for Jansenism throughout our investigation into the French local rites.

The rubrics of the Missal are very much like the Missale Romanum as it existed before the pontificates of Pius XII and John XXIII. There are some notable exceptions. V.3 mandates commemorations of ferial days when a votive Mass is celebrated. V.2 also seems to mandate proper last Gospels for ferial days (wonder how that worked). A marvelous local custom, in Advent feriae orations for the Incarnation were sung (VI.16). In Masses for the dead Requiem aeternam.... is prayed in place of Gloria Patri.... as in the Roman rite. As one reads through the rubrics one understands that this Missal, unlike the Roman Missal of the same time, was intended to be used at sung liturgies in communal settings. The instructions on how many Masses are to be sung on overlapping days and why they do not have commemorations is very clear. The instructions also dictate that lessons, for instance, on certain feriae are to be sung at the normal place. The Roman Missal of the same period, descended from the 1474 Curial Missal, envisioned a lone priest as the norm, likely due to the setting and needs of the celebrants of the 1474 rite. The Parisian Missal was meant for canons of Notre Dame and of other collegiate churches. For instance, when a votive Requiem Mass is sung, it is sung after Prime, is to be followed by Terce and the festive Mass of the day, and then by Sext and the ferial Mass of the preceding Sunday (VIII). The men who used this rite were busy bees.

White is used as a liturgical color on the same major feasts as in the Roman rite, but also throughout the Paschal and Pentecost Vigils. Red gets the nod on Mandy Thursday, Trinity Sunday, Corpus Christi and its octave, and Sundays throughout the year, as well as on many Roman feasts. Green is used for the consecration of bishops and for the anniversaries of such events. Violet is used in Advent and Septuagesima, but "ash" is used from Ash Wednesday until Passion Sunday, wherein black invades until the Paschal vigil Mass (and black is also used for the blessing of ashes on Ash Wednesday). "Ash" probably has its roots in the dull greyish white used in the Norman rites (from which Sarum is descended and which many parishes in England still use); the point was to make Lent colorless, a departure from the visual overload of the older rites per annum. Substitutions for different colors are allowed—for instance, blue for violet—probably as a pastoral provision for parishes without much means. Such was life before mechanized weaving and sewing. Thus far, no heresy!

For those who like the "big six" on your altar, you may not like the Parisian rite. The number of candles prescribed are as follows:


There is a rubric﻿ stating two is the norm for private Masses, however. One wonders what the Parisians thought of Rome's modest six on all semi-doubles or higher and Sarum's constant two! Who said the Latin liturgy was always sparse?

On feasts the priest carries a cross with him on his way to the altar, which the deacon places upon the altar and toward which the ministers pray the Confiteor. Instructions for the Mass proper dictate that incense is to be used at the beginning of Mass only at "great" (solemn) Masses. The ceremonies of the first half of Mass are like those of the Roman rite. The subdeacon sings the epistle while the celebrant and deacon read it and the gradual from the Missal. There is an interesting provision in section VI (on serving the Mass, not the general rubrics) that permit a lector vested in alb, amice, and cincture to sing the epistle without a maniple if there is no subdeacon. Perhaps outside of Rome there were more gradations of Mass than just Low, Sung, and Solemn as we have them today. Either way, the epistle is sung from an ambo or in medio choro, but facing the altar. Another oddity, at least from the Roman view, is that the choristers who sang the Alleluia needed the celebrant's permission when the setting was the archbishop singing Mass from the throne. The Gospel is also read from an ambo. If there are two ambos, then the epistle and Gospel are sung from different ones. At the Gospel an acolyte carries the same cross the celebrant brought to the altar at the beginning of Mass. At solemn Mass the acolyte holds the paten in a veil, receiving it from the subdeacon with a kiss. The Canon is basically done as it is in the Roman rite. The fraction precedes the Agnus Dei as in the Roman rite, in contrast to the older rites of the area. At the Pax the celebrant says to the deacon "Peace to you brother, and to the Holy Church of God."

Communion is given after the ablutions, but not after Mass. The rubrics outright state "the priest does not delay [the communicants] until after Mass without necessity." Was this a hint of Jansenism? Perhaps in the eyes of some the idea of making Communion of the Faithful a prescribed part of Mass was Jansenism. Devotion to the Blessed Sacrament and fear of unworthy communication became so strong during the Middle Ages that Communion of the Faithful ceased because so few received. Priests and deacons would administer Holy Communion after Mass. Yet here it is near-demanded as a part of the Mass for those who wish to receive. Perhaps this was a Jansenist influence. Or perhaps it was just common sense returning. Communion is given the medieval way. The subdeacon holds the paten while the deacon carries a chalice of unconsecrated wine and water as a chaser to make sure everything goes down. When you think about it this made our current fears of people taking the Blessed Sacrament and doing horrible things to Our Lord impossible.

Another rubrical feature that may have disturbed the Roman establishment is the prominence of the acolyte, de facto irrelevant in the Roman rite. He carries a cross at the Gospel, can sing the epistle under the right conditions, holds the paten during the Canon, and gives the Pax to the choir. In short, he is a minister of the Mass and not just a man with a candle! This was, again, the medieval praxis!

The rest of the Mass continues as in the Roman form.

The rubrics are followed by prayers for before and after Mass, many of which are found in the Roman Missal. The tones for the various chants of Mass are also found in this section. Singing them to myself, even with my own voice, I notice that while they differ from the ancient tone in the Roman rite, they are not unpleasant.


The Ordo Missae of the Parisian rite is very similar to the Roman form. Stunningly similar actually. The first half of Mass, the "Fore Mass" or "Mass of the Catechumens," is word-for-word the same as in the "Tridentine" Roman form. At the offertory, the prayers and actions (including the incensing of the gifts and altar) are exactly the same as in the Roman rite with one exception. The priest, before offering the bread with the Suscipe Sancte Pater blesses it with the words: "Lord Jesus Christ, Bread of Angels, Living Bread of Eternal Life, bless worthily this bread [these breads], as You blest the five breads in the desert, that all who taste of it [them] may receive health of soul and body." This one deviation is as orthodox a prayer about the Eucharist as there is. Perhaps its lack of exclusive focus on sacrifice worried those who favored the Roman liturgy's narrowly sacrificial language, which many regarded as a fortress against the insistence of Protestants that the Eucharist is a meal's food. Would the same also apply to the communitarian approach of the Jansenists? Possibly, but it seems a tenuous connection.

The text of the Canon is precisely that of the Roman Canon. At pontifical Mass sung by the Archbishop after the fraction and the Per Omnia saecula saeculorum but before the mingling of the Host and the Precious Blood the deacon announces a blessing ("Bow yourselves for the blessing"). The archbishop then sings "May his peace with you always" as he mingles the Sacred Elements, in place of the conventional "May the peace of the Lord be with you always."

The rest of the Mass is, word-for-word, the same as in the Roman Mass. Again, no heresy. 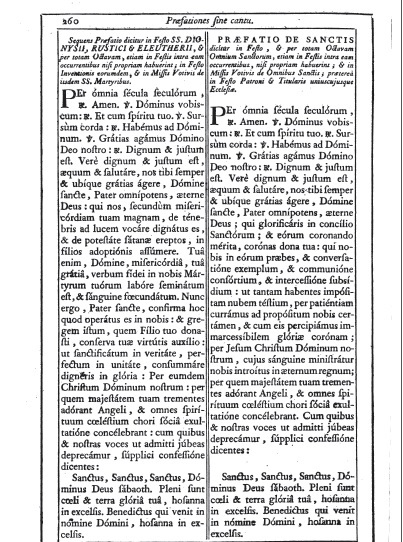 The Parisian Missal contains almost all the Gallican prefaces added to the Roman Missal by Pope John XXIII in 1962, except the Preface of St. Joseph. There are also three additional prefaces not in any post-1570 (and pre-1970) edition of the Roman Missal:
In short, nothing out of the ordinary other than Gallican literary eccentricity and some dull prefaces.

Thus far the Parisian rite appears to be a descendant from the Norman liturgical family which adopted the Ordo Missae of the Roman Missal, albeit with a few local tweaks. The unique prefaces reflect the loquaciousness of French devotion, but are doctrinally sound. As of post one, the Parisian rite withstands Dom Gueranger's condemnation.
Posted by The Rad Trad at 10:06 PM