In New England there are three major religious groups: Catholics, non-practicing Catholics (either cultural Catholics, lapsed, apostates, or just plain inactive), and the irreligious. Texas, I have found, is something entirely different.

Religion here is an industry, and a big one at that. During drives through Frisco and Irving I passed half a dozen or so megachurches in each town. A megachurch, for my international readers, is a uniquely American bit of Protestantism wherein a team of pastors raises a congregation numbering in the high four or low five digits and builds an entertainment facility to use as a house of worship. It is, as one Evangelical put it, like going to the movies. I attended a Evangelical service once as a social courtesy and did not participate in the actual service. Initially I thought the service would offend me, but time and patience revealed pity and not antipathy to be the proper disposition towards these folks: no Sacraments, no Holy Spirit, no Fathers, no liturgy. These people are not little Luthers. They are Luther's victims. But like Luther they have capitalized on their Protestantism and translated their authority into political capital.

Apparently one Democrat candidate for governor in Texas intends to run entirely on a pro-abortion platform. Her money, obviously, comes from outside the state. Regardless Texas will prove a challenge for her. The money behind these megachurches warrants awe and the pastors do not shy from encouraging their congregants from "voting according to [their] Sunday beliefs." No wonder Jerry Falwell's "Moral Majority" was able to raise Ronald Reagan to the Presidency.

But is this religion? Is this Christianity?

The Roman martyred our Fathers among the Saints for not being Roman enough, for being the "other." Had the Christians been enemies of the Empire or its friend they would have received predictable treatment. The Roman subjugated many enemies, such as the Jews, and then re-appropriated their political systems to their own ends. Given the Church's entirely other worldly view this was not possible and many God glorified many of the Church with martyrdom, not with political coalitions.

The multimedia empires of megachurch Protestantism really have no place among Christianity as I recognize it. The Catholic, and Orthodox, Church always try to maintain positive relationships with monarchies and local governments in order to assure her own rights and freedom to operate. The state and local authorities usually complied because 99% of people were Catholic. When that was not the case a pluralism was accepted, but the Church still kept her outlook practical and her goals militant, not commercial. Even the Anglican Church, which I have criticized on this blog, can be said to follow the traditional pattern more than megachurchdom.

Many Catholics, or ex-Catholics, seem to have purchased one edition or another of this American product called the megachurch. Today at a business event I found two instances of ex-Catholics. One was an Evangelical who married a Catholic woman in a Catholic parish—despite his disdain for the gay priest—because the faith was important to her. She now attends his church.... Another fellow was raised Catholic, but left the Church, married, and continues in ignorance. The first fellow attends a more "moderate" brand of megachurch wherein they admit the Bible ain't really the "Word of God" while the other fellow seems to possess a more fundamentalist focus. Despite all this, the second man's wife insists that they attend midnight Mass every Christmas. Why? "She likes Communion and thinks it's important."

Those two exchanges revealed something important to the Rad Trad. The Catholic Church is still recognizable to these people, but, as she was in her early Roman days, she is still the other. Megachurches rarely if ever do "communion" so where would she get the idea that it matters? Why go to a church that does "communion" on a night that is, to Americans, the most important of the year? In the former case the man might have done well to realize that the Church does not believe the Bible is the Word of God in the same way Protestants do. Protestants tend to view the Bible as Muslims view the Koran: God dictated and someone wrote the literal meaning. The Church has a more mature view of the Bible as a whole (she assembled it after all) and in parts (formed by the Fathers, use of those languages, a chain of interpretation, and the Holy Spirit).

Much like the early Romans many American Protestants of various denominations swing between places of worship, be it Bacchus or Baptist, seeking what they know to be missing and they continue to miss it because they are looking in the wrong places. As the Romans discovered, and as these souls hopefully will discover, no Roman or American product solves spiritual woes. They real solution is the "other," the Catholic Church. They are not unlike the women at the tomb on the morning of the Resurrection. They sought one thing and found, or did not find, something entirely different (they probably did not understand even the physical event for days):

The radiant angel standing within the tomb, cried out to the Myrrh-bearers: Why O women Disciples, do you mingle myrrh with your tears of pity? Look upon the tomb and rejoice, for the Savior has risen from the dead.

Blessed are You , O Lord, teach me your statutes.

Very early in the morning, the myrrh-bearers ran lamenting to your tomb. But the angel stood by them and said: Do not weep, the time of lamenting has passed. Announce the Resurrection to the Apostles.

Blessed are You, O Lord, teach me your statutes.

The myrrh-bearing women came with myrrh to your tomb, O Savior, and heard the angel say to them: Why do you think that the Living One is among the dead, for as God He has risen from the dead.

Let us pray to St. Monica for these souls and souls like them, that they may one day return to Christ's fold.

God bless you all! 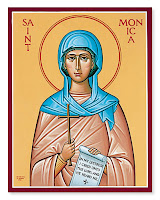