Precious little do we know about St. Vincent of Lerins. Many biographies of the Saint muse, rightly, that if not for his surviving work, the Commonitory, none would remember him. Writing in early fifth century Gaul St. Vincent seeks to "commit to writing such things as I have faithfully received them from the holy fathers." In St. Vincent's time "holy father" did not mean the Pope in Rome, but one's immediate spiritual father, the person who taught one the faith, which prompts Vincent to emphasize that he received things from them with fidelity.

If one receives something, another must pass it. The Latin word for "to pass" is tradere, which gives us our word "tradition." Tradition and antiquity make the faith trustworthy. Far from being corruptions, antiquity places belief nigh its source, with the Apostles and ultimately Our Lord Himself. Given St. Vincent's era, when even Our Lord's divinity was in question, the author of the Commonitory held tradition in the highest esteem. Vincent derives a test for examining the novel doctrines of his own time and ours:

"Moreover, in the Catholic Church itself, all possible care must be taken, that we hold that faith which has been believed everywhere, always, by all. For that is truly and in the strictest sense Catholic, which, as the name itself and the reason of the thing declare, comprehends all universally. This rule we shall observe if we follow universality, antiquity, consent." (Chapter III)

As an example St. Vincent adduces the case of the re-baptism of heretics so common in earlier centuries. Agrippinus and St. Cyprian of Carthage insisted on the re-baptism of those who had fallen from the faith, either by heresy or, most often, by apostasy under the threat of death. They had visibly left the Body of Christ. Did they require another baptism to re-admit them? Logic may say yes, but tradition said no. St. Stephen, "prelate of the Apostolic See," condemned the novel practice as a deviation from what had been handed to the Church by the holy fathers.

We must be vigilant of any deviation from the Gospel of Christ as the Church has received it. Vincent quotes St. Paul: "As we said before, so now I say again: If any one preach to you a gospel, besides that which you have received, let him be anathema" (Galatians 1:9). St. Paul did not intend to isolate this warning to the Galatians. This danger shadows over all men of great intellect in danger of falling victim to their minds, as did Origen. It hovers over those of ego and greed, like Nestorius and Donatus, who leveraged their novel doctrines to gain clout in the political sphere.

Why, then, if it is Divine Law, does God permit heretics to run about the Church so freely? Contemporary Catholics, particularly those of a more traditional persuasion, have asked this question unrelentingly for decades. St. Vincent asked the same question fifteen centuries earlier and surmised that, as was the case with Moses in the Desert, God permits conveyors of novelty to demonstrate their prophecies, their ideas, and their concepts before the Church so that the Church may in time pass judgment upon them. Vincent of course presumes that these innovations end in chaos and disorder. Without exception, history has proven him correct.

Vincent then condemns the wickedness of Nestorius, Apollinarius, and Donatus for twisting the Scriptures, the Word of God, and using them to inculcate strange ideas disconnected from the received wisdom of the Church concerning the nature of Jesus. He defends the Trinity against the blasphemous concept that Christ only acted as a Savior and suffered Crucifixion, asking how would sins be forgiven through the supplication of a feigned act? No, the supplication must be performed by an actual person with both human and divine nature. 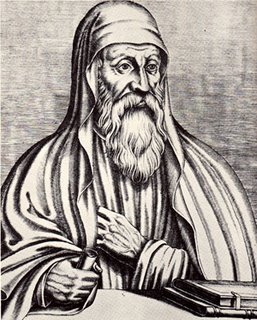 However, one condemnation clearly troubles St. Vincent, that of Origen. With Origen came Christian philosophy and what people now call theology. The same Vincent who condemns Origen in the same chapter asks, "Who would not rather be wrong with Origen than right with anyone else?" Origen, whose intellectual lineage includes many great saints, drew the just ire of the first millennium Church because of one remarkably wrong idea: that the soul pre-exists the body. In Origen's system of thought God creates the soul before the body and at the end of time will revive and save all souls, including that of the Devil and his fallen angels. While many saints believed in a refashioning and renewal of creation and many believe(d) in universal salvation, Origen somehow managed to create the most demented combination of the two. The Alexandrian was not without learning. None were more learned. Yet Origen was still a man with a mortal mind, a mind which subordinated part of God's revelation in favor of his own private philosophy:


Hence it came to pass, that this Origen, such and so great as he was, wantonly abusing the grace of God, rashly following the bent of his own genius, and placing overmuch confidence in himself, making light account of the ancient simplicity of the Christian religion, presuming that he knew more than all the world besides, despising the traditions of the Church and the determinations of the ancients, and interpreting certain passages of Scripture in a novel way, deserved for himself the warning given to the Church of God, as applicable in his case as in that of others, If there arise a prophet in the midst of you,... you shall not hearken to the words of that prophet,...because the Lord your God does make trial of you, whether you love Him or not.

The errors of men like Origen and Nestorius then, or Rahner and Kung today, are trials for the Catholic Church and for its faithful. For this trial St. Vincent creates a test, revealed early in the Commonitory, for examining new ideas in Christianity: for something to be Catholic is must be "believed always, everywhere, and by everybody." In other words, there was never a time when the faithful did not, in some way, believe in a doctrine. What of schism then? The Church has endured many schisms over the centuries since the deaths of the Apostles. Is the Church split then? Does she now hold multiple variations of a doctrine? Not so, says St. Vincent. Once a part of the body tears itself off, it is no longer a member or limb and the Church is better for it.

In Chapter 23 St. Vincent writes the most enduring lines in the entire Commonitory, words raised to even greater stature by the First Vatican Council:


"But some one will say, perhaps, Shall there, then, be no progress in Christ's Church? Certainly; all possible progress. For what being is there, so envious of men, so full of hatred to God, who would seek to forbid it? Yet on condition that it be real progress, not alteration of the faith. For progress requires that the subject be enlarged in itself, alteration, that it be transformed into something else. The intelligence, then, the knowledge, the wisdom, as well of individuals as of all, as well of one man as of the whole Church, ought, in the course of ages and centuries, to increase and make much and vigorous progress; but yet only in its own kind; that is to say, in the same doctrine, in the same sense, and in the same meaning."

In short, if it ain't like your Mama's catechism don't listen to it!

St. Vincent concludes in re-iterating his criteria for the heart and mind of the Church: antiquity, universality, and consent. If a new idea barren of ancient origin and in conflict with the universal opinion of the ancient Church should arise then it is to be consigned to the dustbin without hesitation. Let your criteria be the same!

Aside: I used this edition of the Commonitory because I cannot stand to read regular text on an internet page. I need at least the semblance of a book a pdf provides. The introduction, interesting for its historical context, is a neurotic bit of mid-19th century Anglicanism. At the time many Anglicans were presenting their community as the via media between the "Roman" Church and "protestantism," understandably drawing attention from the hierarchy, who were surprised to find themselves no longer protestants. There are epigraphs from Thomas Cranmer and a passage from John Jebb of Limerick, condemning the "Romish" and "Popish" errors to have crept into Catholicism since the 5th century. I suspect that the purpose of these quotations are to convince less "high" Anglicans that a saint could indeed be safe reading and that Vincent was not solely the domain of "Roman" Catholicism. For those of you who fancy 19th century Anglophonic religious history, take a peak!
Posted by The Rad Trad at 12:05 AM