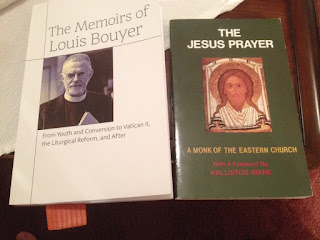 Some time ago I ordered the recent English translation of Louis Bouyer's memoirs, which have received several positive reviews from Catholic writers of traditional and mainstream bends. The back cover has several short commendations from the non-FSSPX luminaries of post-1988 traditionalism: Msgr. Fabian Bruskewitz, Dr. Uwe Michael Lang, Scott "Alcuin" Reid, Tracey Rowland and Dr. Peter Kwasniewski, who also penned the forward. Everyone who endorses the book wants to make Bouyer their own in a quest to question Vatican II, the liturgical reform and the related changes. Having read half his Memoirs today, I see little ammunition for them, although I am not yet at the chapter on "the Council." Thus far Bouyer is less a son of Ottaviani and more a son of John Henry Newman, or at least a close cousin.

Bouyer's conversion parallels Newman's very closely, a fact Bouyer never shies from from broadcasting to the reader, but it is very true. Their conversions were similar, although not identical. Both entered the Church beginning with a genuine, youthful love of the Gospel in its simplicity. Bouyer emphasizes early that he never conscientiously disbelieved the Church's teachings, he just happened to be born into a protestant family. His studies of the Church Fathers, especially of the Alexandrian Fathers who inspired Newman, and of St. Thomas Aquinas nurtured a healthy diet of continuous doctrine and dogma from ancient days until the middle ages. He read the Greek Fathers, too, and, as was the fashion until quite recently, spent time with several men of the Eastern Orthodox Churches (Robert Taft once wrote that the "Western romance with the East" ended in the 1980s). Through praying the Roman Office and spending a great deal of time with Benedictines and Oratorians, he was received into the Catholic Church a few months after the Second World War began.

Unless one is an Anglo-Catholic, one has difficulty reading of the cast of characters in Newman's conversion with any excitement; modern followers of Dr. Pusey are confined to St. Giles Street in Oxford. On the contrary, Bouyer's more experiential conversion involved the who's who of early 20th century ecumenism, which, for good or ill, influenced the direction of the Church in the 1950s and 1960s. He met or knew Beauduin, Lealine, Conger, Brilioth, Ramsey, Gillet and many others before his conversion. Newman's conversion involved substantial reading and a bit of travel Bouyer's was uniquely reliant on travel and popular interaction, which placed him into the center of the rapids when the waves of change rushed into the Church.

This work has some memorable phrases and probably deserves a review on its own later. Here is a quotation about the spirit of conformity that arose within the Latin Church, speaking specifically about a fellow priest:

"The more I became familiar with this new milieu, the more I was struck by the fact that its best elements in the generation before mine, such as Father Brillet, seem never to have recovered from the brutal repression of modernism. Sheltered under a half-skin-deep, half-sincere conformism akin to a kind of family loyalty, they had concocted their own little religion within Catholicism...."


"I cannot complain since this excellent man paid me a very decent salary for the thankless task [of editing his book]. The poor man was saddled with a wife who must have been very beautiful once, but whose stupidity, alas, had never waned."

Of a peculiar interest to me was chapter four, "Initiation". It was not an initiation into the formal Catholic Church, but an initiation into Christian prayer life through the influence of Orthodox ecumenists around him. Bouyer met Fr. Lev Gillet, who surreptitiously received him into the Orthodox fold while still a Lutheran seminarian and on his way to ordination in the Lutheran church. Gillet was himself a Benedictine monk who left for Ukrainian Greek Catholicism, received ordination from the Ukrainian patriarch, and then was received into the Orthodox fold without renouncing a bit of his prior establishments; he happily received Bouyer secretly without asking him to change anything about his life. An episcopus vagans who was unable to rejoin the Catholic Church after marriage found his way into Orthodoxy and created "Occidental Orthodoxy" in France and named his church St. Genevieve. The Moscow patriarch got word of this and, rightly in Bouyer's mind, excommunicated the bishop. Fr. Gillet took over the effort of Western Orthodoxy, despite having written a book on the Jesus Prayer under the nom de plume "A Monk of the Eastern Church." Despite his Orthodoxy, Gillet calls Francis of Assisi, Bernard of Clairveaux, and many other Latin Churchmen saints. Kallistos Ware, in the introduction to my version, recounts Gillet's "reception" into the Orthodox fold without having to make a profession of faith and seems quite at peace with the method. I doubt many Orthodox would be at peace with this reception; I myself am not.

To readers with more knowledgeable Orthodox connections: do the Orthodox have an ecumaniacal problem, or did they in the 20th century? If so, is it prevalent or restricted to the English and French Orthodox diaspora? Can it be traced to certain individuals or is it, like Latin ecumenism at the same time, a gradual acceptance of elements of the world at large?

To digress from the digression, read the Memoirs. Bouyer's was an eager and genuinely Christian soul with a love of Christ and a yearning to live with His truth, something we should all aspire to want.
Posted by The Rad Trad at 11:27 PM