The Resting Place of Sts. Simon and Jude

The relics of Sts. Simon and Jude are buried in St. Peter's Basilica, in the Left Transept beneath the Altar of St. Joseph. They were moved here from the old Basilica in 1605 by P. Paul V.

The new artwork over the altar was commissioned by P. John XXIII. A 1961 painting of St. Joseph by the Cubo-Futurist Achille Funi was converted into the full-size mosaic installed in 1963. Prior to that, the altar had been decorated with a mosaic copy of Guido Reni's "Crucifixion of St. Peter" since 1822. This itself had replaced a 1630 painting of Sts. Simon and Jude by Agostino Ciampelli.

The two Apostles are now reduced to mosaic ovals on either side of the altar. While the new artwork is generally considered to be a failure, there is some pleasure in seeing Joseph installed over two of his sons.

The apostolic relics have presumably resided in Rome since the early centuries of the Church, having been translated from Syria as fellow-martyrs, and their bones commingled within their tomb. St. Jude is usually depicted with an axe or sword, and St. Simon with a saw—the instruments of their deaths.

Their entry in the Golden Legend is quite detailed. 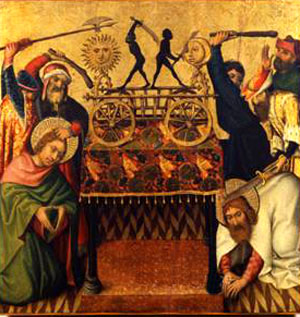 For more about the liturgical and devotional celebrations of Sts. Simon and Jude, see His Traddiness' short post on the matter.