Prudence and the Three Holy Youths

As the Martyrology for December 16 reads, today "were born into the better life the three children Ananias, Azarias, and Misael, whose bodies are laid in a certain cave at Babylon (in the sixth century before Christ)." These three brave Jewish youths—also known as Sidrach, Misach and Abdenago to the Babylonians—were precursors to Christian martyrs, because they were willing to die for the Faith even though God preserved them from death.

The mad emperor Nabuchodonosor had created a golden image to be worshiped, and these three Jewish youths refused to bow towards it. They answered the king:


There is no need for any answer of ours to that question; thou wilt see for thyself whether the God we worship is able to rescue us from the raging fire, and from thy royal power. But, whether he rescues us or no, be assured, sir king, here are men who do not reverence thy gods, or worship any image of thine. (Dan. 3)

What holy precursors to the early Christian martyrs, who likewise refused to offer even the smallest pinch of incense to pagan deities! Many of the Roman martyrs were also preserved from death during multiple horrific torments, until God finally released them from this life. St. John the Apostle survived being boiled alive in oil without so much as a burn.

In a time when Catholics are tempted to bow to the gods of this world, it takes a great deal of willpower to stand up and stand out. 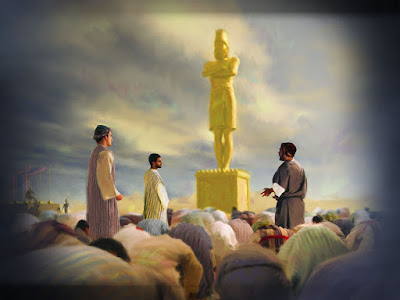 It is interesting, though, that although they were found standing, they were not standoffish towards their heathen conquerors. Even their accusers note that the youths were involved in Babylonian government: "And here are certain Jews, entrusted by thee with the affairs of Babylon province, to wit, Sidrach, Misach and Abdenago, who have set the royal command at defiance." They lived out the dominican abjuration to "be wise as serpents, and yet innocent as doves"; by working among and even for their oppressors they were wise as serpents, by refusing to step over certain moral and ceremonial lines they were innocent as doves. Earlier the three youths had sworn with the Prophet Daniel not to touch the meat from the king's table, which had been offered to idols and was likely ceremonially unclean (Dan. 1). They were willing to work alongside the Babylonians until they were pressured into immorality.

Such was the advice of St. John the Baptist to those asking how they should live under an oppressive pagan rule, rather than having them leave their professions entirely:

There is no reason to go out of our way to seek martyrdom, and the Christian can tolerate many bad situations when necessary. Joseph married the daughter of an Egyptian priest when it was clear he would not be returning to his people. Thomas More remained in government under a schismatic king as long as he was able. We need not rail against the world openly at all times, even when we are surrounded by heathenism, but we mustn't allow our prudent silence make us soft when we will be called to fall down and worship the image.