St. Sergius and His Bear

As must be obvious from the company I keep, I have an affinity for animals who have received their tutelage from the saints. Joseph of Cupertino raised a flock of sheep from the dead, Hieronymus assisted an injured lion, William of Vercelli ordered the wolf that killed his donkey into service, John Bosco was accompanied by a grey dog, and Anthony preached to the fishes when the heretics would not listen.

St. Sergius of Radonezh lived in the 1300s, and is considered by Orthodox and Eastern Catholic Christians alike to be one of the greatest Russian saints. He made his home at one point in the wilderness, like the hermits of old. Under various forms and in various times did the devils attack Sergius, but so exhausted did they become of the saint’s rectitude that they attempted to frighten him out of the wilderness with wild animals. Wolves, bears, and other beasts frightened the ascetic, but did not cause him to forget prayer, and eventually the animals let him be. All except for one bear. 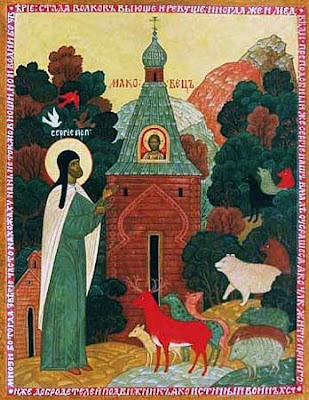 Sensing that this bear came not to frighten him but rather was searching for food, the Russian anchorite began sharing his only food with the bear—a slice of bread. The bear made a habit of eating with Sergius, since food was difficult to find elsewhere. More than once, when there was only one slice of bread to eat, Sergius would give it all to the bear rather than let it go hungry.

So do we tame our passions by bread and fasting, and by “making friends of the mammon of iniquity” (Lk. xvi) do we convert them to our own cause.

It is unknown how or when or even if St. Sergius’ Bear met its demise. For all we know, the Russian Bear has been living a lonely eremitical existence in the Russian wilderness for the last seven hundred years, quietly waiting for someone to bring him a piece of bread in exchange for a story about its old master.

St. Sergius, pray for us!