A Sin Unto Death

Some recent discussions about the perceived duty of a Catholic to pray for and think the best of people in the midst of grave, public evils had me thinking of the first epistle of St. John. Particularly this passage in the fifth chapter:


If a man knows his brother to be guilty, yet not of such a sin as brings death with it, he should pray for him; and, at his request, life will be granted to the brother who is sinning, yet not fatally. There is a sin which kills; it is not over this that I bid him fall to prayer. (Knox trans.)

Does this mean we should not pray for certain kinds of sinners? As with so many other difficult passages, the commentary of Cornelius à Lapide is a useful guide, and I quote it below, with apologies for the length. 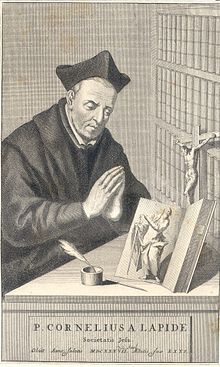 Ver. 16.—He who knows his brother to sin a sin not unto death, let him ask, and life shall begiven him for him that sinneth not unto death. (S. Ambrose, lib. 1 de Penitent. c. 9, and Tertullian, de Pudicit. c. 2, read, because he sinneth not to death.) There is a sin unto death, &c. Instead of I do not say, S. Augustine reads in this place, non præcipio, I do not command. He means, If any one knows his brother to commit any sin, let him pray for him, and God will give him repentance and forgiveness. I except, however, the sin unto death. If any one sins a sin unto death, I dare not promise, nor have any certain hope, that thou wilt obtain pardon for him. Yet I do not altogether forbid prayer in such a case. Pray if thou wilt, but with a doubt of obtaining.

You will ask, what is the sin unto death? 1st Tertullian (de pudicit. caps. 2 and 19) is of opinion from this passage that there are some sins, like those of the devils while they were yet in a state of probation, so deadly that they are absolutely irremissible in this life. Such a sin was adultery after baptism. But this is an error condemned in Scripture and the Lateran Council under Innocent III.

2d. Origen thinks it is a sin which leads to destruction, and drags down to hell.

3d. Surrianus (lib. 4 pro Epist. Epist. Pont. c. 3) thinks it is a sin which involves excommunication. For an excommunicate person is impenitent. And it is not lawful to pray for one excommunicate in the public prayers of the Church. But S. John is speaking of any kind of prayer, even in private.

4th. S. Augustine (lib. 1 in Serm. Dom.) thought it was the sin of envy, by which any one envies his brother’s grace, virtue, and salvation. But this opinion S. Augustine afterwards modified and retracted.

5th. The same S. Augustine (lib. de corrept. et grat. c. 12) and many others think it is the sin in which any one perseveres unto death. Lorinus thinks that it is the sin of hatred and murder. Others think it means the sins of the reprobate, and of those who will be damned. But it is uncertain who and what those are. Yet S. John says, he who knows his brother sin a sin not onto death.

6th. The Gloss supposes it to be a mortal sin. For to pray for such sins is the duty ex officio, so to say, of the Priest alone. But for venial sins any layman whatever may pray. But what S. John says is opposed to this, for he intimates that he is speaking, not of venial, but of mortal sins, and subjoins, “life shall be given him.”

7th.  S. Jerome (in cap. 14 Jerem.) thinks it is some very grave sin which God has determined to punish. “For he who once,” saith be, “hath been devoted to the sword, or famine, or pestilence, cannot be delivered by any prayers. Wherefore it was said to the Prophet that he should not ask in vain what he could not obtain.”

8th. Dionysius thinks it is the sin of final impenitence. Wherefore the Bishop of Rochester (Art. 17 cont. Luther) proves the doctrine of Purgatory from this passage. For S. John says we are to pray for those who are not finally impenitent, that is, who depart in a state of justification or repentance. And this surely implies prayer that they be delivered from Purgatory.

10th. Gagneius thinks it is the sin of apostasy and infidelity, by which any one falls from the faith into heresy or idolatry.

11th.  S. Hilary (in Ps. cxl.) thinks it is the sin which any one commits of set purpose and malice.

12th. S. Ambrose thinks (lib. 1 de Pen. c. 8) it is every very grave sin which is remitted with difficulty.

Most of these opinions are true, and partly explain, but few touch the exact point of the difficulty.

My own opinion is, that the sin unto death is every very grave sin which, either on account of its enormity or long habit, obstinacy or malice, is irremediable according to the ordinary rule of grace which God gives. Such was the sin of Judas in betraying Christ. It was sin unto death because of its enormity; and incorrigible, because of his obstinate persistence in it. So too the sin of the Jews in blasphemy and slaying Christ was a sin unto death, because so heinous and persisted in. Therefore the sin unto death is a chronic and irremediable one, the pardon of which is despaired of, and which so provokes the wrath of God that the ordinary prayers of the saints cannot pacify it, and one therefore which with absolute certainty brings the sinner to the destruction of hell, unless some especially eminent saint, like another Moses, obtains for him from God extraordinary grace and forgiveness. This sin unto death is as if a physician was summoned to a sick man, and after examining, him were to say, I cannot heal him, he is sick unto death, the vital parts are mortifying. In like manner, says S. John, when a Christian sees a heretic and an apostate, let him say, I should not dare to pray for him, he is sinning unto death. His vitality is gone. He casts away faith, which is the principle of spiritual life. This is the mind and general opinion of S. Augustine and Jerome, Origen, Bernard, Bonaventura, S. Thomas, and many others. There is a reference to the words of Christ to the Jews (John viii 21 and 24), “I go away, and ye shall seek Me, and shall die in your sin.” From which passage we gather that though the sin unto death be of various and multiform kinds, as impenitence, obstinacy, determination to persevere in any sin until death, and so on, yet strictly by the sin unto death S. John understands and intends a sin by which a Christian departs from the faith and Church of Christ, and maliciously attacks them, and strives to draw others away into his own heresy, or idolatry. This was what some were doing in S. John’s time, to his great fear and grief. Wherefore, in order to deter the faithful from being led away, he calls such persons sinners unto death.

By this sin a man opposes himself directly to Christ, from whom is the only hope of salvation. He drives Him from him, yea he blasphemes Him by whom alone he can be healed. So the disease is said to be incurable which does not admit of food or medicine. Whence S. Paul saith to the Hebrews (vi. 4-6), “For it is impossible for those who were once enlightened,” &c.

This sin is not to be healed by any one but by Christ alone. For such a sinner is like unto Lazarus, of whom Martha said unto Christ, “Lord, by this time he stinketh, for he has been buried four days.” Wherefore Jesus, with great effort, weeping and lifting up His eyes to heaven, and crying with a loud voice, “Lazarus, come forth!” raiseth him again to life.

I do not say that any one should pray for it. Thus the Greek and Latin.  S. Gregory has a reading, that any one should pray for him. The meaning is, I do not forbid prayer for such, but I dare not promise that the prayer will be answered. For often God will not hear those who pray on behalf of the sin unto death, according to the words in Jeremiah, vii. 16, “Pray not thou for this people, for I will not hear thee.”

S. Bernard says (de Grad. Humil. cap. ult.), “The Apostle John says, for such a one I do not say that any one should pray. But dost thou say, O Apostle, that any one should despair? Indeed let him who loves him groan. Though he may not persume to pray, yet let him weep. Thus Martha and the Magdalen wept the death of Lazarus, and by weeping obtained his resurrection.” 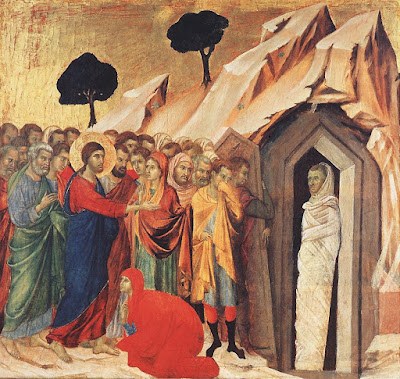